Valeriote Fights to Kill the Bureaucracy of Death 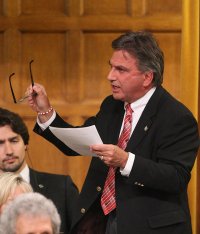 As Guelphites, and other Ontarions, go to the polls, their local MP Frank Valeriote will be sitting through the second debate of his private members bill, Bill C-247. While not a pressing matter of urgency, Bill C-247 does aim to make life easier for people going through a very difficult time: the loss of a loved one. The aim of Valeriote's bill is to expand the scope of Service Canada to be a one stop shop for all Canadians coping with the death of a citizen or resident, and all the paper work that comes with it. Is dying in Canada a red tape nightmare, and can Valeriote's bill save people that extra grief in the midst of their actual grief?
The full press release from Valeriote's office is below:

“Under the current system, a bereaved Canadian or the legal representative of a deceased must contact multiple federal government departments and endure the difficult and aggravating process of repeating a death notification because there is ‘no single point of contact’ for the information to be registered,” said Mr. Valeriote. “As well, federal departments may have different documentation requirements for proof of death.”

“As Parliamentarians, we need to provide relief to grieving seniors, survivors, caregivers and estate representatives who are responsible for settling the obligations of a deceased with the Government of Canada,” said Mr. Valeriote. “It is essential that we deal with the issue of bereavement in a professional and compassionate way. Bill C-247 will improve Government of Canada services and reduce the burden on Canadians during a difficult life transition.”

Bill C-247 would streamline the notification system and reduce the costs of the administration of estates. The creation of one porthole at Service Canada would bring efficiency to the system and remove the guess work for survivors and estate administrators who may not be fully aware of the deceased’s obligations to the federal government. The bill could also reduce the possibilities of benefit overpayments and costs to the federal government to retrieve such expenditures. As well, it would avoid the possibility of requests arriving years later from the federal government demanding repayments, interest charges and penalties.

Valeriote concluded, “I encourage all Parliamentarians to support this non-partisan and practical legislation. This is an appropriate extension of Service Canada’s mandate and an opportunity to provide service excellence to bereaved Canadians.”

Valeriote will address his bill during its second reading debate on June 12, 2014.