Not Sure Who to Vote For? How About Declining the Vote? 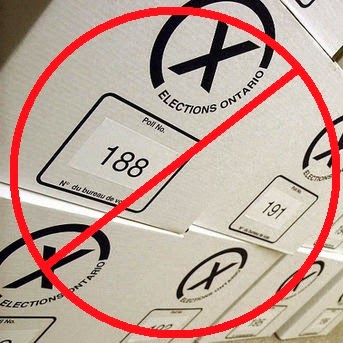 The ennui of this election season is palpable, and the proof is that despite being up against a scandal-plagued, decade-old government, neither of the opposition parties can make a case for themselves as a replacement. The perpetual three-way race this election is surely infuriating for politicians, but its a reflection of the how the electorate feels: no one party has made a convincing pitch to take the Premier's office for undecided voters. So what is an undecided voter supposed to do? One Windsor activist has the answer: just don't vote.


Say what? No he's not advocating that you join the half of eligible voters that already stay at home on Election Day, instead Paul Synnott is saying that you should make a point of going to your polling station, getting your ballot, and handing it right back to the returning officer.
"It’s a way of saying ‘none of the above,'" Synnott told the Metro News. "It tells politicians that my vote is available, but none of you are worthy of my vote. If enough people start doing this, politicians will take notice."
So is this, like, legal? I draw your attention to Section 53 of the Ontario Elections Act:

You have to hand the ballot back to the returning officer though, otherwise it counts as a spoiled ballot and is counted separate from the votes that are purposefully declined.
"Declining your vote is an active, specific thing that says, 'I’m not voting for anybody,'" added Synnott.
To learn more, you can go to Synnott's website at http://www.declineyourvote.ca/
Posted by Adam A. Donaldson at 8:30 PM