#ONelxn14 - Everything in its Right Place? 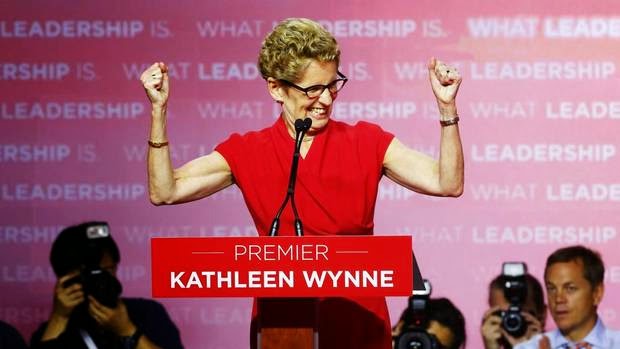 Huh. Well, that was weird. Any reasonable estimate of last night's election results foretold another minority government, it was just a question of under who and how much of a majority. Nope. The Liberals, who we were all supposed to be sick and tired of, now return to Queen's Park with a majority government, beating all reasonable expectations about the election's outcome with Kathleen Wynne now the Premier of a political secure government. Tim Hudak, leader of the Progressive Conservatives, is stepping down after the complete and utter failure in his own mandate to unseat a besieged and unpopular government. And Andrea Horwath, despite her bold and risky campaign strategy, managed to come out quits with the same number of seats coming out as she had going in. But was it all worth it? And what happens now?
Kathleen Wynne - Make no mistake, this was not an easy win (or Wynne). The foregone conclusion since she took up the leadership of the provincial Liberals in February 2013 was that her days in the Premier's office were numbered, and now she's assured at least four more years. How? Good question. Was it an outright refusal of the Hudak economic plan, or were Ontarions more of the opinion that it's better the devil you know? Probably a bit of both.
Interestingly, although the Liberals gained 11 seats, their share of the vote only went up one per cent. Unofficial results say that 52.1 per cent of Ontario's eligible voters came out to vote Thursday, which not only reversed the decades long decline of voter turnout, but likely contributed to several Liberal victories. In New Market-Aurora, for example, the number of eligible voters that cast a ballot went up by over 6,800, which is about the same number of votes that was gained by the Liberal victor Chris Ballard, over the Liberal candidate in the 2011 election; PC candidate Jane Twinney, by comparison, didn't lose even 2,000 votes from PC incumbent Frank Klees. In Northumberland—Quinte West, PC Rob Milligan had almost the same number of votes in 2014 that he had in 2011, but lost to Liberal Lou Rinaldi who garnered 4,000 of the almost 6,000 more votes that came out for this election.
So where did all this Liberal love come from? One might blame Hudak's policy proposals and their failure to connect to the electorate, or perhaps it was the appeal of the more progressive platform offered by Wynne in her budget promising more money for infrastructure and transit. Perhaps at play is a sense of balance, with the Federal government Conservative and many local governments also conservative, maybe voters like at least one level of their government liberal (or Liberal). Maybe that's why almost the entirety of Toronto and most of the GTA is solidly coloured red. (Christine Elliott is now the only PC MPP along Lake Ontario from Hamilton to Prince Edward.) That's not a fluke, that's not evidence of voter ennui with the opposition or partisan bickering, that's an outright endorsement of the governing party.
In the meantime, pundits have already dismissed the immediate victory to look forward and figure out what implications there may be for the 2015 Federal election. On the one hand people are pointing to the gas plant scandal and saying that if voters don't care about the billions lost here, they won't care about the measly thousands lost in the senate spending scandal. On the other hand, the Liberals now seem very viable to take back seats lost in Ontario, perhaps the most swing-likely of provinces in the next election. At the very least, it looks like the Liberals could upset the Federal Tory majority, but there's still a whole year between now and then. 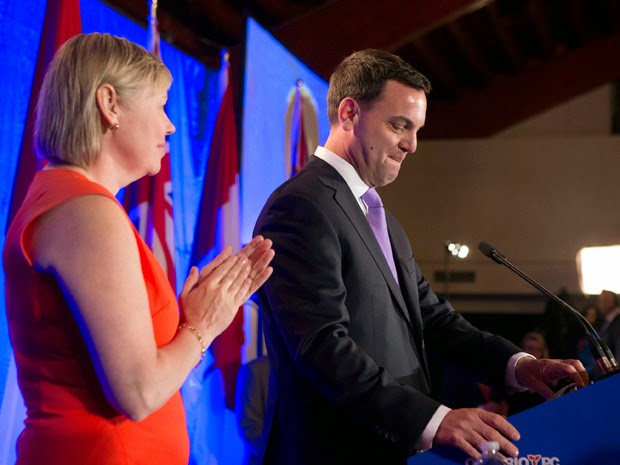 Tim Hudak - Let's be clear, it's long been said that anything other than a minority government for the PCs would be failure on the part of Tim Hudak, and Thursday's results represented a total political and policy collapse. As a result, he announced his resignation late Thursday night. The Progressive Conservatives kicked off the campaign with 37 seats and the presumed momentum, but ended up crawling across the finished line with 10 fewer seats after losing some previously safe Conservative ridings and ones gained during the off-year by-elections.
Among the deep cuts to the PCs' electoral prospects was Etobicoke-Lakeshore, a rare blue victory in the typically red Toronto in 2013, but ormer city councillor Doug Holyday lost to Peter Milczyn by 6,500 votes last night. Although ploughed over by the Liberal sweep, observers are also crediting Holyday's connection to Rob and Doug Ford as the reason for his lost. But Holyday hadn't been his seat for even a year, long-time PC MPPs were also feeling the burn. In Halton, Ted Chudleigh lost his seat by over 6,000 votes after being in Queen's Park for years having first been elected in '95 with Mike Harris' "Common Sense Revolution." Closer to home in Cambridge, PC Robe Leone lost to Liberal Kathryn McGarry after the Liberal share of the vote went up nearly 6 per cent. Interestingly, a higher voter turnout as compared to 2011 made the difference in Cambridge, another safe PC riding since '95.
Overall, the PCs lost 4.2 percentage points in the total vote while support for the other two parties was mostly flat. This can't be taken as anything less than a refutation of Hudak's campaign strategy, not so much the Million Jobs Plan that was vetted thoroughly by the media for its likely inability to created a million jobs, but more for the promised cuts to 100,000 jobs and other austerity measures. Although it didn't come out in the campaign, Hudak has previously been on the record as saying that he was in favour of "right-to-work" style legislation, and perhaps Ontario voters have long memories. Either way, Hudak's proposal to turn right seemed impalpable to Ontario voters, and Hudak also lacked the personal charisma to sell his own platform.
Losing the election to a Liberal majority is a stinging defeat for the party, but at least the PCs have the time now to vet a new leader who will either be more centre-right, or at least have the ability to sell right-leaning policy better than Hudak. 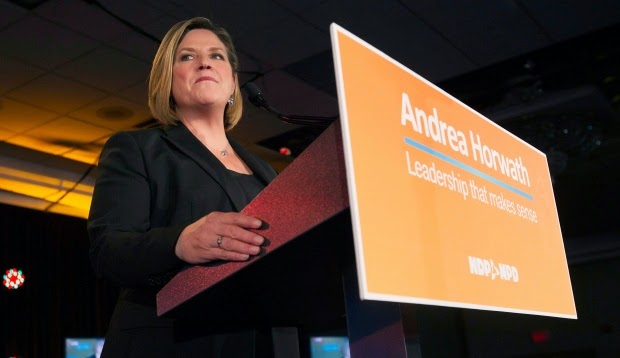 Andrea Horwath - The good news is that the NDP came out no worse at the end of the election night. They held on to same number of seats they had at the dissolution of the legislature, and didn't lose their share of the vote. On the other hand, they didn't win more seats and didn't expand their share of the vote either. Horwath, like Hudak, launched a bold campaign that veered to the right, aiming, like Jack Layton, to win over supporters who rarely, or never, give their support to the NDP. Unfortunately for Andrea Horwarth though, she's not Jack Layton. And the gains she made Thursday in new constituencies may have come at the cost at the party faithful.
Still, Horwath is not out of the woods. At her last leadership review, Horwath won 76 per cent support, a solid showing but hardly ecstatic. In toppling the Liberals six weeks ago, she offended many of the union leaders the NDP typically counts on, and on top of that she couldn't make a convincing case for what the New Democrats would do differently. With a couple of notable exceptions, the NDP was shutout of Toronto, even though urban voters are another one of their prime demographics. The saving grace for the NDP was northern Ontario and the industrial southwest, which suggests an exploitable split in the party between blue collar workers and downtown urbanites.


As for Horwath, her leadership may be safe if only because the election broke even for her party, as opposed to the PCs for which it was a disaster. Still, looking back, some will question if Horwath was right to pull the plug. The NDP under a minority Liberal government had power and influence, those 21 votes were needed for the government to keep governing, and now that's gone. Also gone is the high ground on progressive issues like transit and electoral reform, as Wynne's budget promised billions in funding for regional service, and the Premier was the first to endorse ranked balloting for the fall's municipal election.
Horwath should be concerned, especially since the old guard NDP have already rumbled against her with their dissatisfaction. The NDP tried to position themselves as the natural alternative to both the Liberals and the PCs, while seemingly being unaware that those are two entirely different audiences they were trying to appeal to, all while abandoning those people and ideals that made the party in the first place. Horwath may avoid a harsh leadership review for now, but she'll be under the looking glass for the next four years. 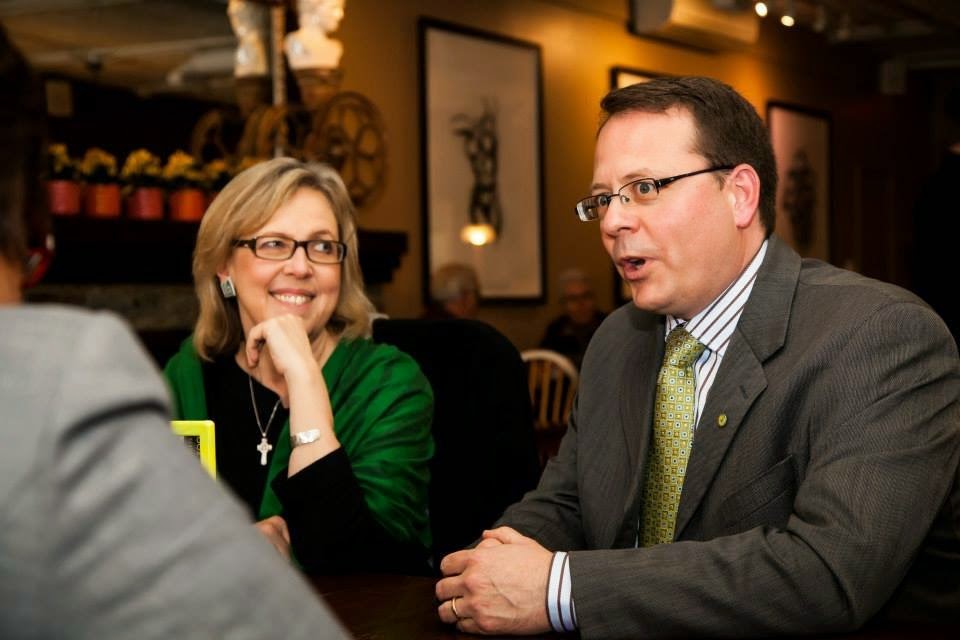 Mike Schreiner - In talking about the Green Party leader, we allow ourselves an opportunity to talk about the Guelph race. But before we get into that, provincially for the Green Party it was good news/bad news. The good news was that their share of the popular vote was up, garnering nearly double their 2011 share of 2.9 per cent of the vote, with the Greens province-wide winning 4.8 per cent last night. The bad news is that those results still fall three points short of the party's all time high in 2007, in which they won 8 per cent of the vote.
As for Schreiner's run in Guelph, it was the Green Party's best showing ever in the riding. It terms of vote share, Schreiner matched Ben Polley's all-time high with over 19 per cent, but by sheer number of votes, Schreiner won over 10,181 voters to Ben Polley's 9,635 in '07. Schreiner certainly won back a lot of the Greens who either sat out or didn't vote for Steve Dyck in 2011, but what was lacking was the ground swell that could have carried Schreiner to Queen's Park. All the stops were pulled out in the Royal City, Green signs were everywhere and the candidate himself, despite being a party leader, invested a lot of time locally, yet he still could not seal the deal as it were. Why? A juggernaut in the form of Liz Sandals.
Sandals didn't just win, she conquered. Garnering over 2,100 votes more than she did in 2011, Sandals sailed to victory with over 41 per cent of the vote. With 21,949 votes in total, she had her best showing since she won her first election in 2003. PC candidate Anthony MacDonald managed to do almost as well, losing a mere 775 votes from Greg Schirk in 2011. The real loser though was NDP candidate James Gordon. Gordon lost 1,758 votes from his 2011 performance, which suggests that he lost some support to the Greens and the Liberals. Overall though in Guelph, as in the rest of the province, voter turnout was up, which may indicate that many of the nearly 7,000 extra Green votes in 2014 came from that higher turnout.
That should give Schreiner and Co. a boost, because if they stay the course, and stick it out in Guelph, there's a good chance that Sandals may take her leave sometime in the next four years. A by-election, with an emphasis on get out the vote efforts to all those new Green supporters could make the difference in a by-election situation, which typically has lower turnout numbers than in a general. A Green MPP may still be possible in Guelph, but that will be up to the commitment level of Schreiner and whether or not he decides to stay in town.
Posted by Adam A. Donaldson at 9:09 AM

I predict he will follow the popular vote % and head out of town. Look out Parry Sound Muskoka. Perhaps too far from his home base in TO.
Just visiting