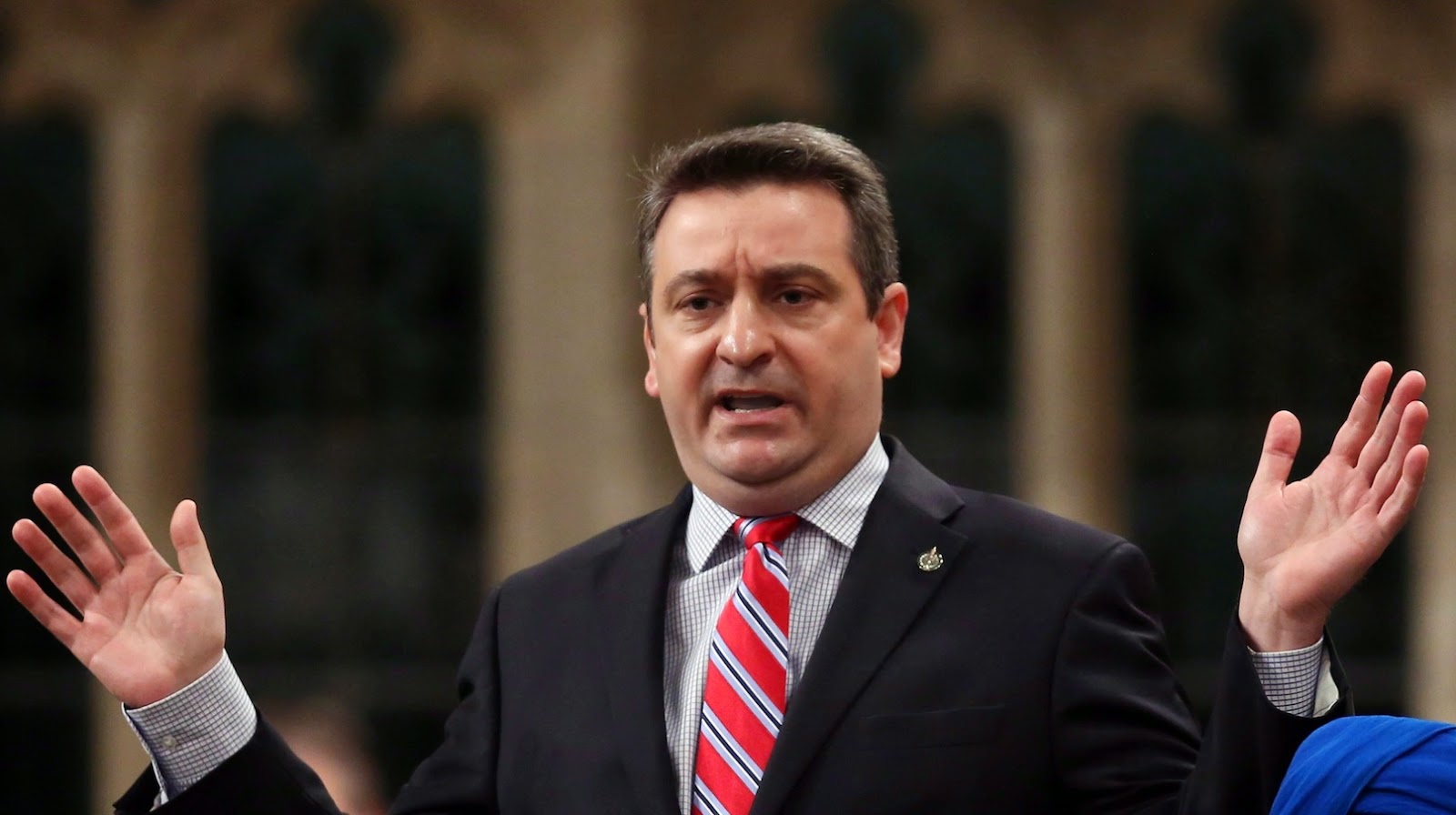 Although in politics there always seems to be someone sticking their foot in their mouth, 2014 seemed particularly problematic on a number of levels. Whether it was a key member of the prime minister's party going way off track during Question Period, or a politician's supporter predicting doomsday scenarios because their candidate lost, 2014 was a prime year for crazy in politics. It seemed weird to not comment on it before the year was through, so let's relive the madness of some of the most truly bizarre political moments of the 2014.
Read more »
Posted by Adam A. Donaldson at 12:57 PM No comments:

In completing the two-part Top 10 list of the year's biggest political/news stories, we turn to the local scene and recount the doings that had us talking locally and provincially throughout 2014. We had back-to-back elections where no matter the side you were on, they both might have had surprising results. Court matters took up a good portion of the year as both the city and a young campaign worker had their days in front of a judge. We also said goodbye to a number of politicians leaving office (or who announced that they were leaving office in the future), we said hello to new people and new circumstances, and we all reveled, or were repelled by some damn, dirty campaigning. It was a year of great change to be sure. This was the year 2014, locally and provincially, at least according to me.
Read more »
Posted by Adam A. Donaldson at 12:07 AM No comments: 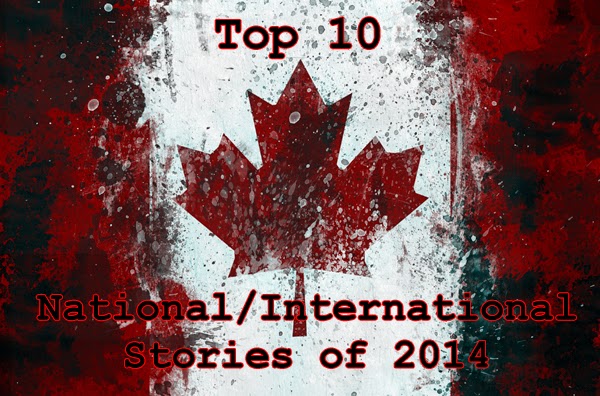 To borrow a Rocksidean phrase, it's been another busy year, and since I'm an internet journalist with a seasonal dearth of creativity, it's that time of the year for lists. Again, Guelph Politico will count down the stories of the year in two lists, the National/International stories and the Local/Provincial Stories. Going first is the Top 10 on all matters of federal and global importance, with wars and rumours of wars, pestilence and politicking, and political quakes in Alberta and Quebec all making the cut. To widdle this year 2014 down to just 10 big things was a bit of a chore, but I'll leave it you, the reader, to decide if its reflective of your experience.
Read more »
Posted by Adam A. Donaldson at 9:30 AM No comments: 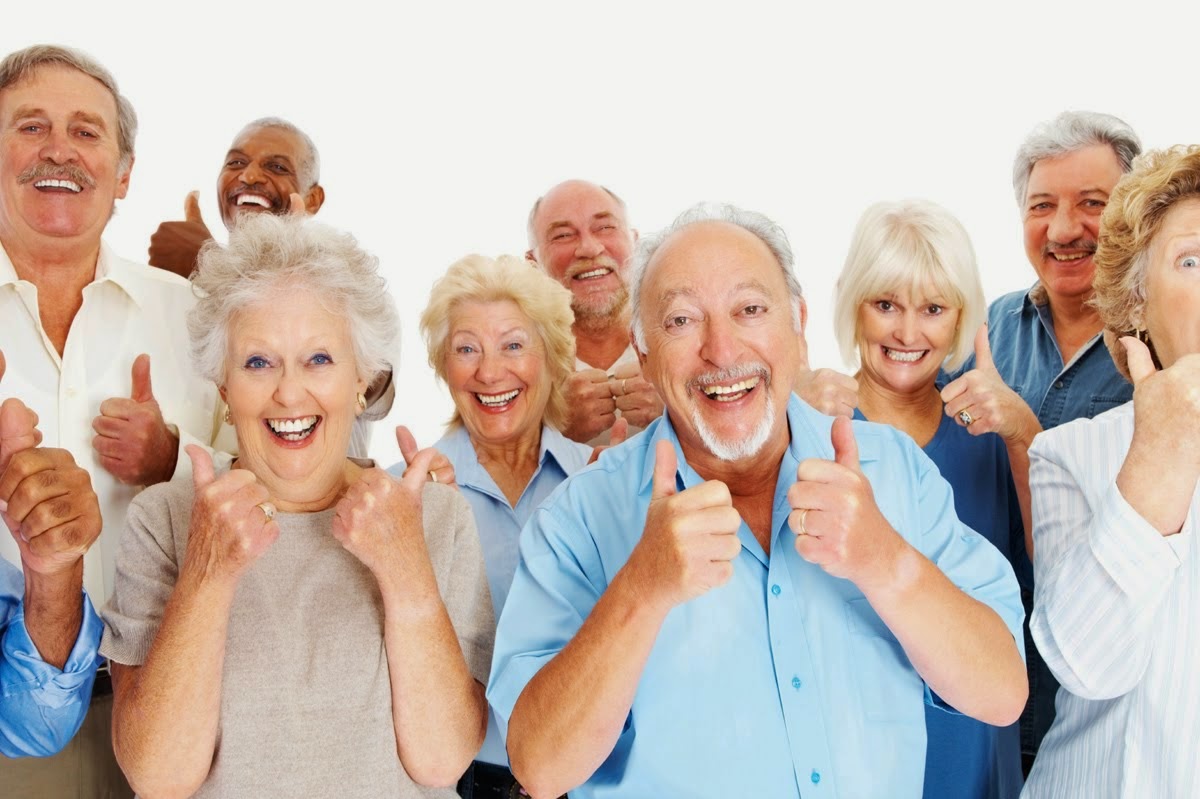 It's a terribly kept secret that the population of Canada is aging. Baby boomers are entering their retirement years, and that number has no where to go but up. So it begs the question, is your community ready to deal with a population that's getting an older, or, if you're getting older, is your community ready to deal with you? Well, if your community is Guelph, you'll be pleased to know that the World Health Organization has now certified the Royal City as a great place to live if you're old. Guelph  - like Brussels, Seoul, Tehran, New York City, and many more - is now a member of the Global Network of Age-friendly Cities and Communities.
Read more »
Posted by Adam A. Donaldson at 1:55 AM No comments:

6.5 Tons of Food for Guelph After Ambulance Stuffed 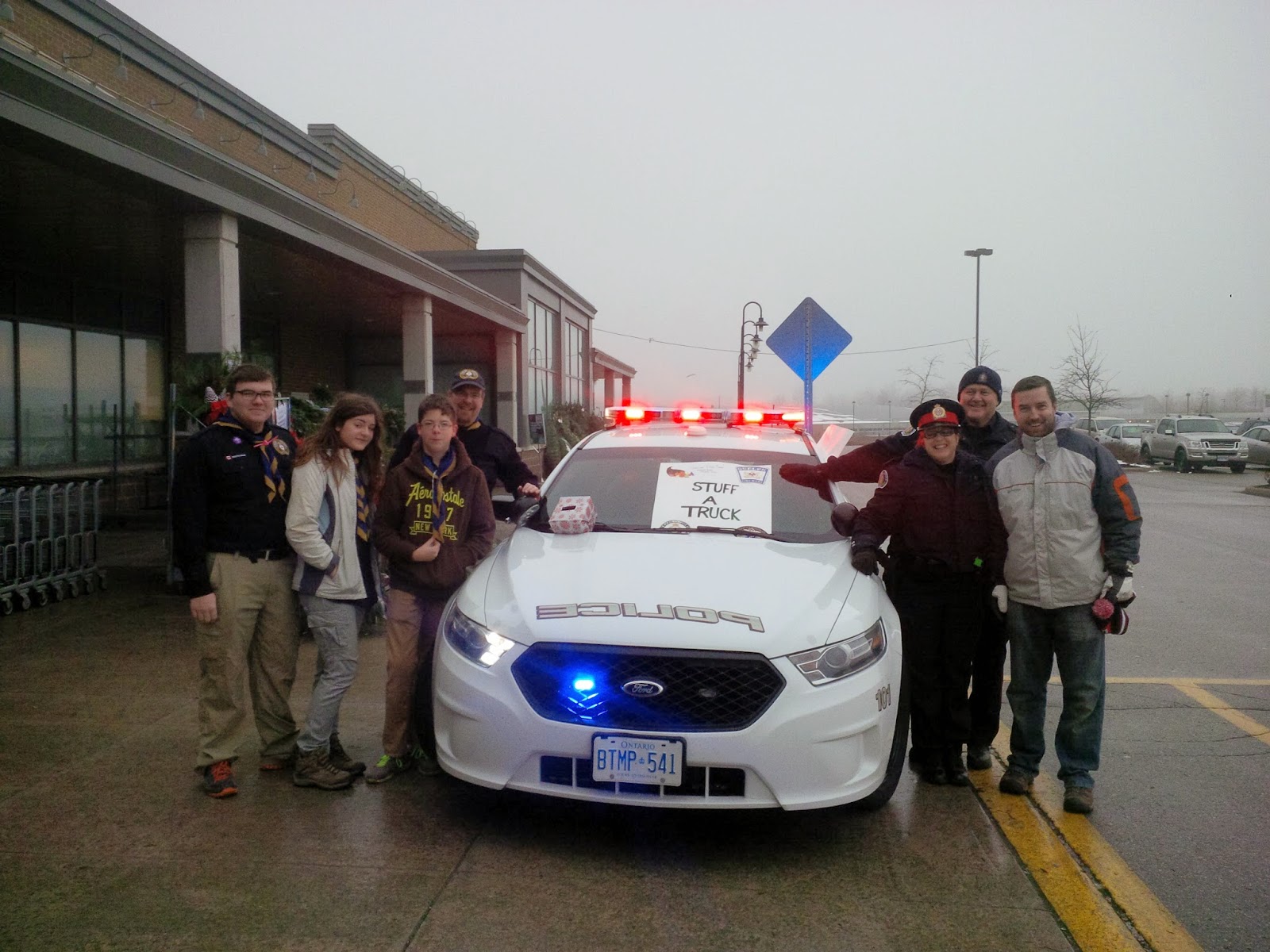 Christmas is a time of giving and Guelph gave, and gave, and gave this year. The Guelph Police Service announced the results of their thrid annual Stuff and Ambulance campaign, and the results were impressive. I almost think that the Royal City should upgarde to a "Stuff a Bus" campaign a la Waterloo Region. That's not up to me, obviously, but what I can report is that the Guelph Food Bank, which I profiled in a recent Guelph Politicast, is getting about seven more tons of food soon. Just in time for the holidays.
Read more »
Posted by Adam A. Donaldson at 12:00 PM No comments: 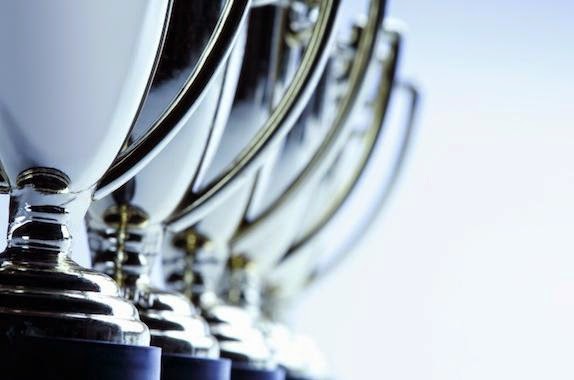 It's that time of year again. Christmas! And the Beyond the Ballot Box Awards. Fitting for the final episode of the Gang of Four, we salute the real heroes: the politicians and news stories we talk about weekly. If you were listening to the radio, you will have heard my picks already, but in case my justifications weren't clear, I decided to write them out in long form below. It was a very busy year in politics, and there were a lot of darts and laurels (mostly darts) to go around, but after considering all the factors and contenders, here are my choices for Best Politician, Worst and Dumpster Fire of the Year.
Read more »
Posted by Adam A. Donaldson at 6:00 PM No comments:

Farewell to the Gang of Four 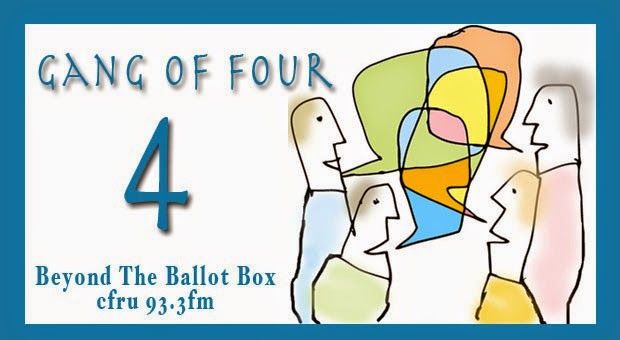 Sadly, tomorrow brings to a close a three year odyssey called "The Gang of Four," the little radio show that could. Honestly, looking back on the last three years working with the gang, it's a wonder not that it's coming to an end after three years, it's a wonder that it kept going week after week for this long. This a show, after all, that none of us get paid to do, and a lot of work goes into each and every show as we all seek to provide balanced and intelligent insight into the various issues of the day. But now the time has come to say goodbye. Sort of.
Read more »
Posted by Adam A. Donaldson at 8:00 PM No comments:

Who's Doing What on Committees and Boards at City Hall? 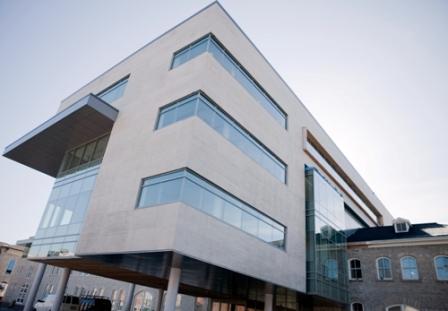 Being a part of city council isn't all galas and townhalls, you know. There's also a lot of committee work involved, AKA: where much of the real work of city hall gets done. As per usual at the beginning of a new term of council, new assignments for city council;s standing committees, board and agencies were organized at last night's meeting. The full list is provided below.
Read more »
Posted by Adam A. Donaldson at 10:00 PM No comments: 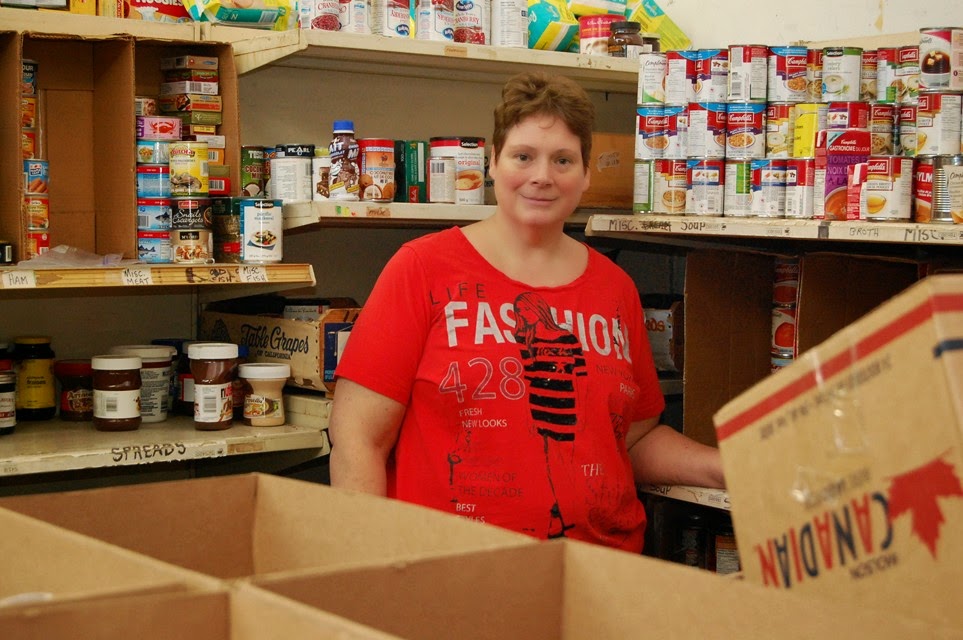 During this festive time of year it's important to remember that not everyone is gifted with a wonderful bounty of food and gifts. In fact, people struggle just as hard, if not harder, during the holidays as they do the rest of the year. The Guelph Food Bank is one of numerous organizations in the Royal City that aims to help those that need a hand, offering a monthly hamper of groceries, as well as other services, to those who struggle to make ends meet when a weekly salary, or lack of salary, just can't cover all the necessities. In this edition of the Guelph Politicast, we pay tribute to the hard workers of the Guelph Food Bank, who do their part year around to address the enormous wealth disparity in our society.
Read more »
Posted by Adam A. Donaldson at 5:01 PM No comments: 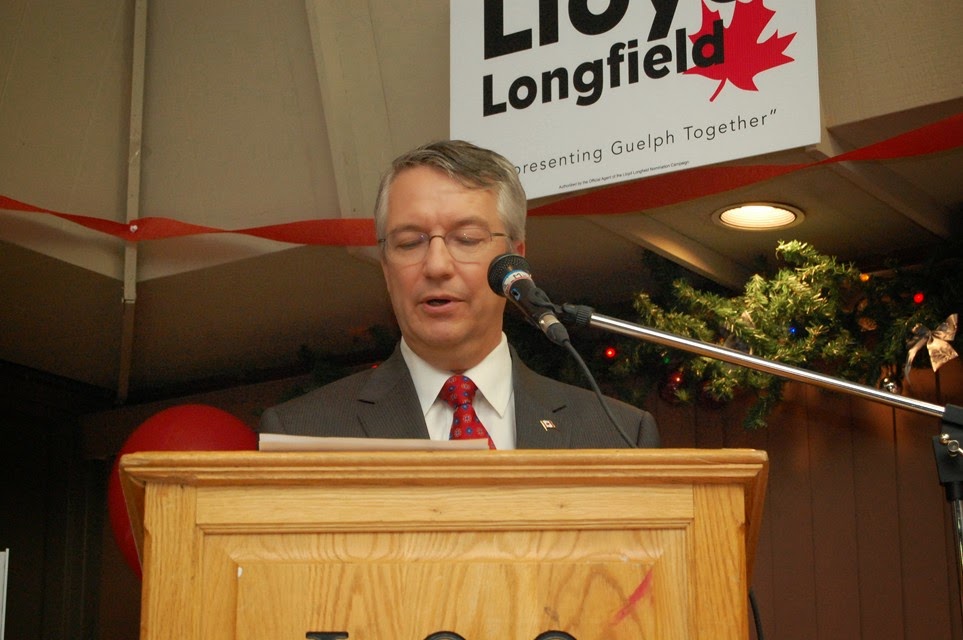 Lloyd Longfield has spent the last couple of weeks letting the people tell him if he should run for the Liberal Party of Canada, and it appears that the opinion is an affirmative. Longfield intends to make his entry into federal politics official tomorrow night, kicking off the race to succeed Frank Valeriote as the Liberal nominee and, hopefully, Guelph's Member of Parliament. Below is the press release announcing the former President of the Chamber of Commerce's intention to run.
Read more »
Posted by Adam A. Donaldson at 2:00 PM No comments: 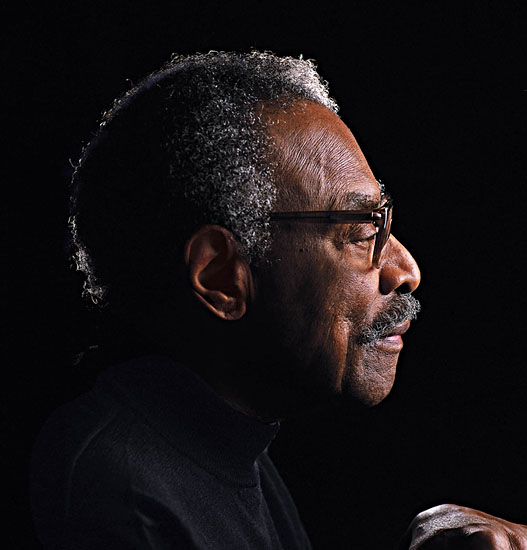 Following up on a 2013 vote in Queens Park to make January 21 Lincoln Alexander Day, the politicians of Parliament Hill have decided to follow suit with their own pronouncement. The former Member of Parliament, Lieutenant-Governor of Ontario, and Chancellor of the University of Guelph passed away a little over two years ago now, and while he may not rank a national holiday (yet?), it's still some quality recognition for a great man.
Read more »
Posted by Adam A. Donaldson at 8:51 PM No comments:

Posted by Adam A. Donaldson at 9:00 AM No comments:

EDITORIAL - Still a Long Way to Go on Violence Against Women 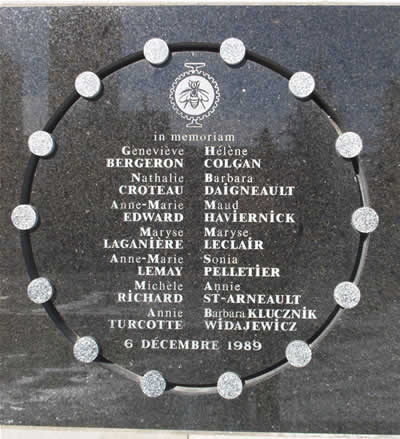 Like the Fall of Berlin Wall, which was commemorated last month, the murder of 14 women at L'École Polytechnique on December 6, 1989 is a news story I remember experiencing in real time. I was 11 at the time, so old enough that some of those memories still reach me a quarter of a century later. By then I knew enough French that "L'École" meant "school," and as much the seriousness of the situation resonated, so did the question: Why would anyone want to shoot up a school? Of course Marc Lépine was not there to shoot up a school, we was there to shoot and kill women. And 25 years later we're still struggling with a society where women feel like they're under attack, and where mistakes of the past seem far too easily repeated.
Read more »
Posted by Adam A. Donaldson at 12:30 AM No comments: 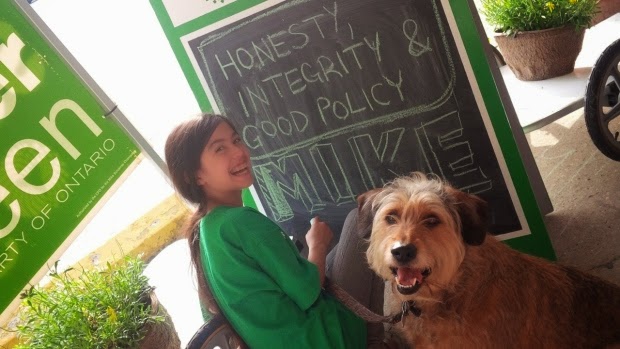 And they say young people are too apathetic/don't care about politics. Pshaw! Tia Carey blows all those theories away, and she can't even vote for another six years. The local office of the Green Party of Ontario, also known as the home base of GPO leader Mike Schreiner, sent out accolades today for young Ms. Carey, who was an active volunteer for Schreiner in this past spring's Provincial Election and has now been recognized for that volunteerism with a silver medal in Samara Canada's Everyday Political Citizen Youth Award. The finalists were announced the other night on Rick Mercer Reports.
Read more »
Posted by Adam A. Donaldson at 1:00 PM No comments:

Scenes from a Swearing In

With the dulcet tones of the Guelph Youth Singers, a song by new Ward 2 Councillor James Gordon and a declaration of intent by the new Mayor of Guelph Cam Guthrie, the next term of council was called to order tonight at the council chambers of 1 Carden St. In front of a packed house, platitudes were offered, and promises were made as Mayor Guthrie and a team of seven new councillors and five veterans embark on a quest to guide the City of Guelph well over the next four years.
Read more »
Posted by Adam A. Donaldson at 11:17 PM No comments: