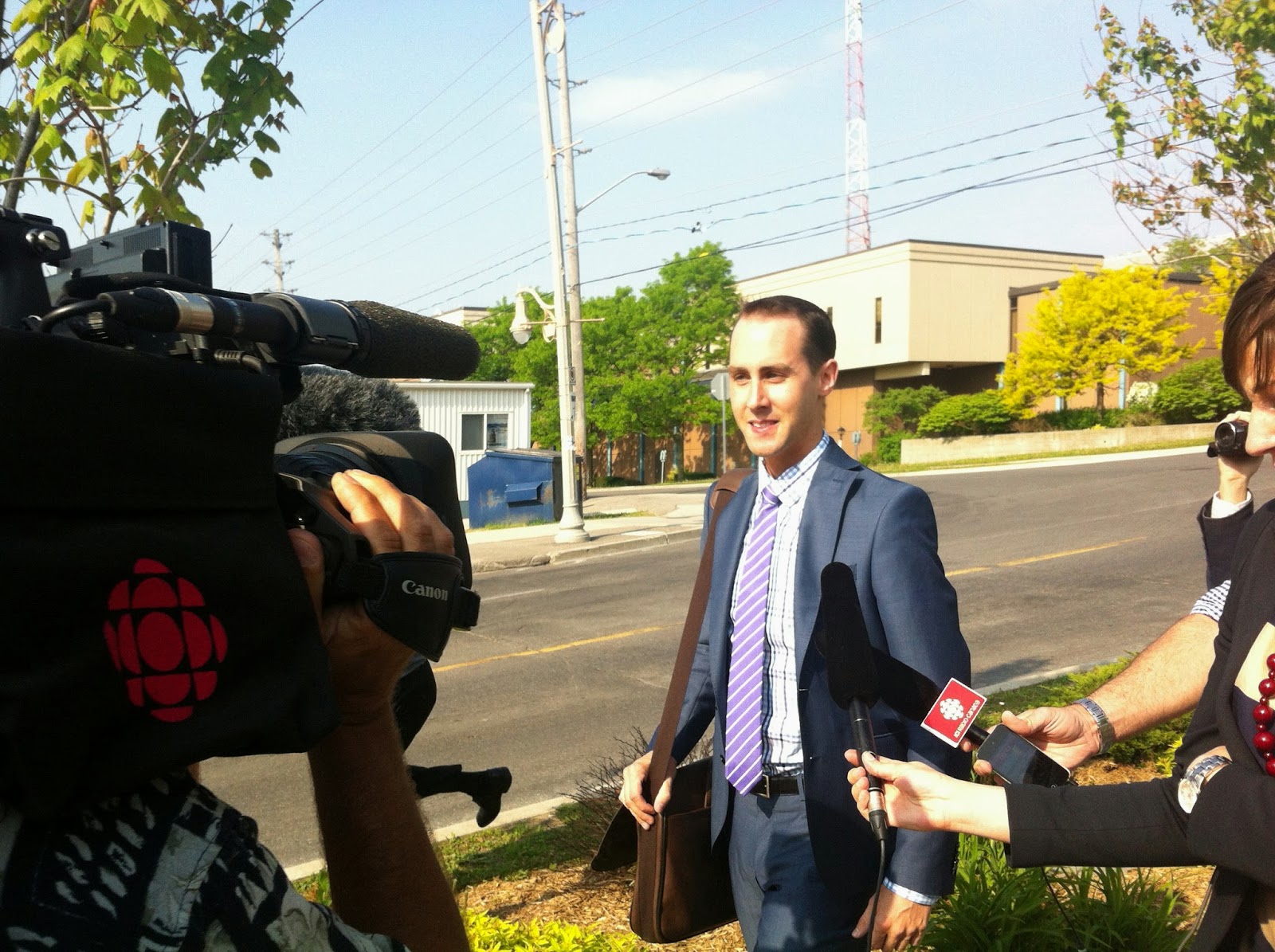 For local politicos, this was the biggest thing to hit the Guelph scene since we had back-to-back federal elections in 2008. I know, we lead a dull life, but for everyone who have wanted to see some kind of justice come out of the 2011 attempt to defraud voters of their right to vote, all hope now rests on Courtroom #2 at the Ontario Court of Justice in Guelph. Michael Sona, the communications director for the Marty Burke campaign, arrived for the start of his trial in fine spirits. He said he felt "great" and was looking forward to seeing how it all played out. What played out Monday was a recital of uncertainty as the first three witnesses called to testify teetered between throwing Sona under the bus (again) and exonerating him by omission.
In front of a gallery full of local, provincial and national press, as well as Sona's parents, crown prosecutor Croft Michaelson started laying out his case against Sona, who's charged with "willfully preventing or endeavouring to prevent an elector from voting." Michaelson proposed amending the court schedule, shorting the time set aside for trial by two days, and then began laying out the list of Admitted Facts. Confirming much of what we already know about the chain of events regarding the robocalls, the prosecution, through witness testimony, will try to tie Sona as the man who went to Futureshop, bought a burner phone, got a couple of prepaid Visas, record a fake message, and had a telemarketing firm sent it out to over 6,000 Guelph homes.
The first witness called by the Crown was Chris Crawford, a classmate of Sona's from the University of Guelph, an associate from the Conservative Party's internship program, and the Canvassing Chair of the Burke campaign. Michaelson questioned Crawford about the Constituency Information Management System, or CIMS, how it was accessed, why it was accessed and how someone on the campaign would get access to it. Crawford was also asked why he would repeatedly log-in to the system, which was blamed on glitches in the office internet service.
Also of concern to Michaelson was the layout of the Burke campaign office, particularly where certain campaigners would typically work from, where their computers were and in what cubicles they worked in. It was at this point that Crawford was asked about a conversation her overheard between Sona and a man he assumed was campaign manager Ken Morgan, owing to the fact that they were the only two other people in the campaign office that night. According to Crawford, Sona was "joking" about "American-style" campaign tactics, "suppressing voters and keeping them from showing up at the polls." Crawford said that the conversation was very general, mentioning no specific techniques and was off the cuff, the type of conversation you hear in any campaign office at anytime.
Michaelson pushed further, and asked Crawford to recount his testimony to Elections Canada investigators in March of 2012, when he described in more detail that Sona talked about calling Liberal voters late at night, and re-directing voters to other polling stations. Crawford then recalled that the timetable of this conversation was before the start of advanced polls, roughly two weeks before the May 2, 2011 Election Day and the day the robocalls were eventually made. Crawford also testified that he had talked to Sona who said that he would never do something like organize fraudulent phone calls, and the two apparently agreed it was a bad idea.
Under cross-examination, Sona's lawyer Norm Boxall set about poking holes in Crawford's testimony painting Sona as a character looking for trouble by asking the witness about two other elections he asked for Sona's help on immediately following the 2011 Federal Election, including his own race to be re-elected as Eastern Region Vice-President of the Ontario Progressive Conservatives.
Boxall then started to zero on what seemed to be the real villain in his estimation, Andrew Prescott. The deputy campaign manager on the Burke campaign and local blogger was familiar to both Sona and Crawford, and when Boxall asked Crawford when he last communicated with Prescott, the witness took a long pause before answering. Sona's attorney then wanted to know if Prescott was in the campaign office on the morning of Election Day, and where Prescott's work station was in relation to Morgan's.
Crawford was then pressed on a slight discrepancy in his testimony on the stand today, and what he told Elections Canada investigators in 2012. Two years ago, Crawford said that there were other people, volunteers, around in the office when he overheard the conversation between Sona and Morgan, but today he said it was just the two of them. When pressed by Boxall, Crawford reiterated that, no, no one else was in the office at the time, just Sona, Morgan and Crawford.
The examination then turned to Arthur Hamilton, the Conservative Party lawyer who accompanied and consulted many party witnesses in their interviews about robocalls with Elections Canada. According to Crawford, then-Conservative Party Director of Communications Fred DeLorey referred him to Hamilton after Crawford went to DeLorey for advice when contacted by Elections Canada. Boxall asked why Crawford approached DeLorey, and Crawford said it was because DeLorey was someone he felt "comfortable" talking to. Boxall then asked Crawford if he thought the investigation was a communications issue. No, replied Crawford simply. When pressed about why Crawford went to his Elections Canada interview with a lawyer not his own, but one representing the party, Crawford said "that's what I felt comfortable doing."