So, last week was what a week for the Liberal Party of Canada. Stéphane Dion resigned last Monday after the final straw in his leadership was the lack of production value on his rebuttal video to Prime Minister Harper's speech. With Dion back to the back benches, the Liberals acted swiftly to coronate Michael Ignatieff as the new leader, but only one thing stood in their way: The Man Named Rae. But even Bob Rae heard the call, "Get Out Da' Way," and "got out the way" he did. So Iggy ascended to the top of the bottom, and now he's got a whole month to plot the next move.

Dion - I feel sorry for Dion. Having met him a couple of times, I have to say I liked him. I also liked the boldness of the Green Shift Plan. Say what you want about it, but it thought in big terms. The problem was communication, and when it comes to getting the message out, it starts at the top. And since English is far from Dion's first language the substance of the Green Shift was lost in translation, and infighting in the Liberal ranks about its validity didn't help either. Much like John Kerry in the 2004 U.S. Presidential Election, I think Dion became a victim of the times. In the New Media Age, the full substance of his policies, as well as his person, didn't fit compact in to sound bites. In the town hall format though, I think he shined. I guess its too bad he couldn't have pulled an Obama and do an half-hour infomercial.

Rae - Come on, Dude! Really? Victory was that close?? Anyway, it was nice of Bob Rae to take the day and act tough as if there was going to be a serious groundswell of support demanding a proper vote because he was a serious leadership contender. Maybe he was, I don't know. It's weird, but given the givens, I was sure Rae didn't have a lot of support considering he's the former NDP Premier of Ontario, and not a fondly thought of one at that. But Ontario is strangely forgiving politically. After the drastic ouster of the Mike Harris Tories, I never would have thought that Ontario would though support behind a Federal Conservative caucus filled with many former Harris Ministers. Rae's a name, you can't deny it. But to me, he's never going to get the top chair after a history of playing political party ping pong.

Ignatieff - So I've never been a huge Michael Ignatieff fan. It's just always seemed to me that the only reason he came back to Canada and ran for government was so that he could quickly ascend to the Prime Minister's Office. Maybe he has altruistic motives, I have no reason to suspect ulterior ones, but if you know the story it just sometimes seems like he had to be dragged back to Canada with the promise of potential power. As for his policies, well, he's already in trouble because he's one of the guys not for the coalition. So maybe, I guess, it's not about power after all. But the thing of it is, the recent Liberal Party hasn't had a lot of success when it comes to Leaders coronated, but then again, things haven't gone as well through the convention route either. And if Dion looked too professorial, then here comes Ignatieff who somehow makes John Kerry look like Jim Carrey. I'll reserve final judgment until I see Iggy in action, but the first he's got to do on the quick is lay out exactly where he is on the subject of coalitions and make it clear in no uncertain terms, especially when Jack Layton is double-dog daring Stephen Harper.
Posted by Adam A. Donaldson at 1:06 PM No comments:

Back By Popular Demand...

How did that line go, "Just when I thought I was out... they pull me back in"

Truly, due to recent political events in Ottawa, I decided to resurrect my old blog. Although it wasn't really old. It's been barely a month and a half since I shut it down thinking that our elected representatives were genuine in their desire to make Parliament work.

Boy was I dumb.

Anyway, I chose to open the digital doors of this portal again today because over the last couple of days I've been developing thoughts, feelings and opinions about coalitions and prorogues and all that stuff and I've had no where to put them. And as much I was hoping to turn down the emphasis on political discourse to focus on matters a little more artistic... Well, you know...

"Politics is the art of looking for trouble, finding it everywhere, diagnosing it incorrectly, and applying the wrong remedies." -Groucho Marx

Not only was Marx one, funny mo-fo, so to speak, he was also a very wise and astute observer of politics and human nature. Ever watch Duck Soup. If he hadn't died in 1977, Groucho probably would have been killed from a brain aneurysm stemming from the comedic possibilities presented in the last eight days of Parliament.

Here's how it stands now: Stephen Harper got up bright and early today and marched across the road to Rideau Hall spending two hours of what I can only imagine was some kind of grovelling to convince Governor-General Michaelle Jean to prorogue Parliament until cooler heads prevail, or something to that affect. Since Parliament won't be sitting again until January 26th, the country can take a breather with all confidence motions cancelled. In the new year, the Harper government will present a full budget, which will be a confidence motion itself, and then the chips will fall where they may.

In a political free-for-all, the likes of which that hasn't been seen since California's recall election in 2003, it seems that no one's come out a winner. Half the country is pissed that Michaelle Jean stopped the rise of a progressive replacement to Harper, and the other half of the nation is ranked because the threat to usurp the duly elected Prime Minister of the country was on the table in the first place.

Tonight in Guelph, a small group of dedicated protesters, including city councillor Maggie Laidlaw and musician James Gordon, held court in St. George's Square to talk about the "62 per cent majority." Here's what the press release said,

"Elected with the support of just 38% of Canadians, Stephen Harper's chosen to act as though he has 100% of the power. Instead of working with other parties to tackle the current economic crisis, Harper's opted for total inaction and political tricks. And now he's lost the confidence of Parliament.

"A 62% majority of Canadians didn't vote for Stephen Harper. They voted for a government that will kick-start our ailing economy and put their family first."

The sentiment was shared by the small crowd in the Square whose comments ranged from blaming the GG for not telling Harper FU about the prorogue to a little hate over Guelph MP Frank Valeriote's comments in the Guelph Mercury. "I believe in working toward a solution, not working toward a coalition," he told the paper in a phone interview. He added that Harper "was sent here, with us, to work together and right from the beginning it has been clear he was not interested in working with us."

Now, from my talks with Valeriote I know that he's not saying that he's all about propping up the Conservative government despite any alleged partisanship or douche baggery. I think he's just a guy that wants to get down to work, and I think that's what a lot of other Canadians want too. As for my own thoughts, well, I'll go into those at a later date. For now here are some images from tonight's gathering. And if you missed it, another rally will take place this Saturday at noon in the Square. 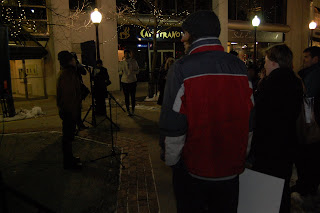 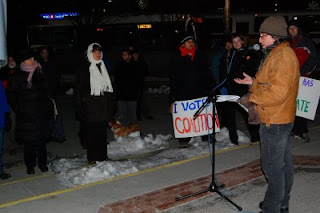 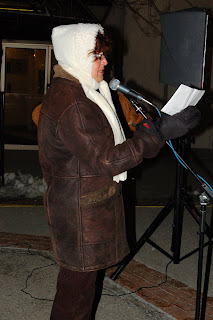