It's fairly rare that I can merge my two passions, politics and film, but a new exhibit at the Ed Video Gallery gave me an occasion to combine the two in this, the third episode of the Guelph Politicast's second season. Today, I talk to David J. Knight, an artist and archaeologist who's put together a new show to coincide with the Festival of Moving Media called Hidden Histories: Guelph Cinema.
Read more »
Posted by Adam A. Donaldson at 10:27 PM No comments: 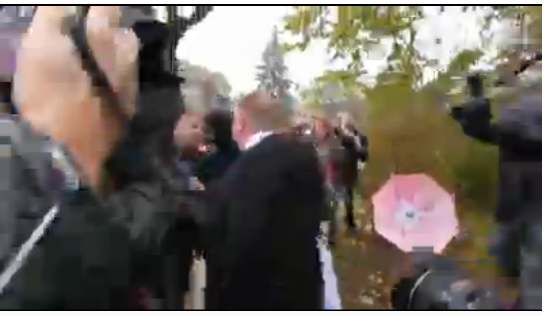 I don't know about you guys, but I find this video startling. If you haven't been following, or are following,the story, nearly 500 pages of documents from a police investigation of Alexander 'Sandro' Lisi are being released today, and the information reported so far indicates that Toronto Mayor Rob Ford kept pretty close company with Lisi as he was going about his business dealign drugs. This probably came as no surprise to the mayor judging by his reaction to the media encamped in his driveway this morning.
Read more »
Posted by Adam A. Donaldson at 11:06 AM No comments:

This should be interesting. The city sent a press release out this morning saying that they're officially entering into collective bargaining with the Amalgamated Transit Union (ATU) Local 1189, the union that represents the city's transit employees. The last agreement was reached in the summer of 2010 and expired this past June, so transit workers have effectively been working without a contract for the last four months. Considering the tough times, could the issuing of the below press release be advanced notice that these negotiations might be tricky business?
Read more »
Posted by Adam A. Donaldson at 7:28 PM No comments:

In more or less one year from today, Guelph residents (and indeed most residents in towns and cities across Ontario), will go to the polls to choose their local government for the next four years. Now a lot can happen in a year, so making predictions this far out seems rather counter-intuitive. Instead, let's consider some of the questions Royal City voters might have concerning the state of politics in town as we roll into an election year: Who will run? Who will run again? Who might be looking for a promotion? And what issues will be the deciding factor on who gets a seat around the horseshoe in 2015? Below are nine things to consider as we gear up for the 2014 campaign trail.
Read more »
Posted by Adam A. Donaldson at 7:58 AM 1 comment:

Wyndham Street Open Again (But Not to Big Trucks)

Nearly a week after a close shave with a big rig, Wyndham Street between Carden Street and Wellington Street is open again after city engineers did... Something. Well, there are new signs up now. No big trucks are allowed through, but buses, ambulances and other vehicles are all good to go.
Read more »
Posted by Adam A. Donaldson at 8:24 PM 1 comment: 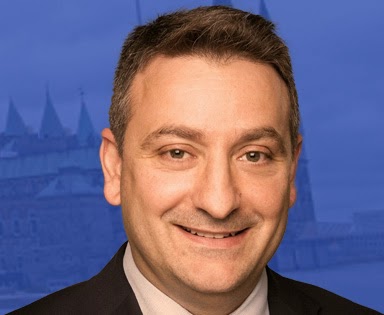 Stephen Harper's first Question Period of the fall didn't go the way he wanted, I think. Despite a strong attempt to pivot away from the ongoing senate expense scandal (including new revelations that Senator Mike Duffy and members of the PMO beyond Nigel Wright colluded on Duffy's sweetheart deal) by harping - pun intended - on the new free trade deal with Europe, the opposition smelled blood in the water and wanted to track it back to the source: Stephen Harper.
Still, Harper left some of the heavy lifting in Question Period yesterday to the new new parliamentary secretary to the prime minister, Tory MP Paul Calandra. When NDP ethics critic Charlie Angus hit the floor to ask again about Duffy, it was Calandra that unleashed a rhetorical flourish that made his fellow Conservatives proud and left everyone else confused.
Read more »
Posted by Adam A. Donaldson at 10:38 AM No comments:

Just When You Thought it Was Safe to Drive Down Wyndham... 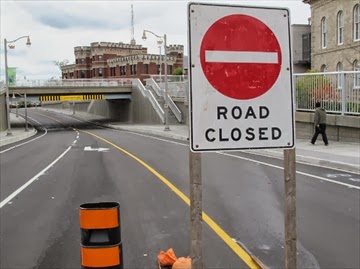 The news on the weekend that another truck scraped the roof of the train bridge that runs parallel to Carden Street seems to have forced a city shut down of Wyndham Street between Carden and Wellington. This is sure to be unpleasant news for people who do business in and around that intersection, but given that this isn't the first time that the roof's been a little too low despite the stated clearance, it's going to be another needle in the city's back concerning just how well the entire reconstruction project around Carden was handled.
Read more »
Posted by Adam A. Donaldson at 4:39 PM No comments:

This Week In Rob Ford

It's been a while since I wrote about Ol' Fordsie, but so much goes down with the Mayor of Toronto this can almost be a weekly, if not daily column. In fact, the "Morning Brew" feature on BlogTO is almost a clip-a-day slice of whatever controversy - major or minor - is presently marching through the Mayor's Office. For Rob Ford, the week began explaining some phone calls he was making, segued into losing his appeal to the Ontario Press Council, then he did a hatchet job on a city employee supposedly caught napping on the job, and is now wrapping up the week with the revelation that Ford wrote a character reference for his good friend Alessandro Lisi, part-time Ford driver, (alleged) full-time drug dealer. Just another week in Ford Nation.
Read more »
Posted by Adam A. Donaldson at 9:47 AM No comments:

On his new blog, Guelph Today, former Mercury city hall reporter Scott Tracy wrote earlier this week about a report that said a proposed "bar stool tax" for downtown watering holes would hurt the business of booze and make weekend revellers even more difficult to manage. My question: how can anything hurt the business of booze and make weekend revellers any more difficult to manage?
The idea of a "bar stool tax" has been kicking around for some time. The principle is that the expenditures incurred by the City with policing and cleaning-up of Downtown Guelph every weekend should be taken out of the pockets of the bars making money off the 10,000-plus people who shuffle through the "downtown entertainment district" Thursday through Saturday nights. Fair enough, and past due, many would say. The City has always hedged though. Why? A couple of reasons.
Read more »
Posted by Adam A. Donaldson at 9:17 AM No comments: This afternoon, Governor General David Johnston delivered the Speech from the Throne, a Hail Mary of oratory, with which Prime Minister Stephen Harper wants to put a summer of scandal behind him. Proroguing Parliament in mid-August, the government said they need an extra month and half to prepare a new list of objects they wanted to tackle in the fall session, and the result was a veritable recital of Conservative talking points on the issues of budget, economy and law and order. But the question remains: are the opposition and Canadians willing to hear the government out on their new wish list, or continue to fight the battles already in progress?
Read more »
Posted by Adam A. Donaldson at 9:09 PM No comments: 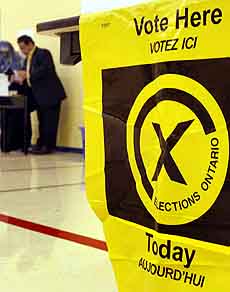 This event was mentioned during the recent Guelph Politicast with Frank Valeriote, but if you're a reader and not a listener, check out the news release from Valeriote's constituency office below.
Read more »
Posted by Adam A. Donaldson at 1:31 PM No comments: 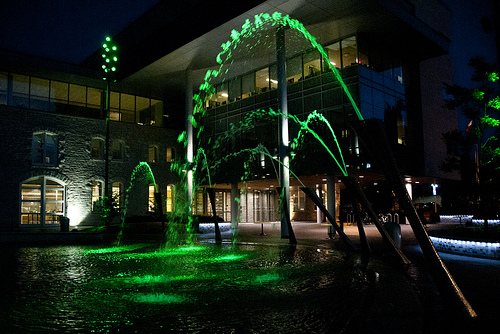 The new political action group GrassRoots Guelph is hitting the ground running in terms of its advocacy for Guelph voters. A press release sent out earlier this week outlined the group's intent to request a forensic audit of the City of Guelph's finances after 160 people signed a petition from GRG to demand the audit from Ontario's Ministery of Municipal Affairs and Housing. What do they hope to find? Proof that the city's managers are spending like drunken sailors of course.
Read more »
Posted by Adam A. Donaldson at 2:55 AM No comments: 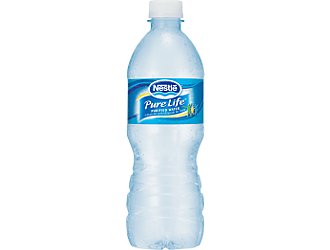 That thud you heard last week was Nestlé Waters giving up its appeal to a decision made last fall by the Ministry of the Environment to grant them permission to take water from a Hillsburgh well with the caveat that their intake be reduced in times of drought. Nestlé's surrender is being seen as a victory by many of the local environmental groups, a capitulation by the industry that the unlimited taking of water from our local fresh water sources is going to be tougher row to hoe from this point on. But will that be the case?
Read more »
Posted by Adam A. Donaldson at 10:37 AM No comments:

Council to Talk Water Rates and Other Money Matters

Despite the ongoing controversies, the Ontario Liberals are holding on to power with a vice-like grip. Still, the opposition parties continue to jockey as if an election is in the immediate future, and the local NDP is looking to lock up their candidate in the Royal City.
Read more »
Posted by Adam A. Donaldson at 9:56 AM No comments:

So it's taken a while to get to episode two, but we're here now for what I hope is the first of a string of regular Guelph Politicasts. In this edition, I talk to our local Member of Parliament Frank Valeriote.
Read more »
Posted by Adam A. Donaldson at 9:43 PM No comments: As the U.S. government enters week two of its shutdown, America's primary source of information, its beloved lat night comedians, have pointed out some of the buffoonery that's driving the debate, specifically in regards of the Affordable Care Act. The ACA, or "Obamacare" if you like, was the lightening rod for the shutdown, with many in Congress demanding that if Barack Obama wanted to keep the government open, then he had to defund/repeal/stall the implementation of his signature piece of legislation.
Read more »
Posted by Adam A. Donaldson at 12:58 PM No comments:

Politics can be a source of tremendous humour. In fact, people might say that humour is about the only thing our modern political culture is good for now. A Guelph event next week is going to prove that all over again as Riotwire.com will be putting on their comedy show tour in Royal City at Ed Video Media Arts Centre.
Read more »
Posted by Adam A. Donaldson at 8:50 PM No comments: