As noted in the local media, a plan to build a brand, new, spanking library on the corner of Wyndham and Woolwich was approved with a 10-2 vote at city council Monday night. The stretch that includes the Cowboy Bar and the Family Thrift Store, and formally housed Fresh Start and Wyndham Arts, has been pretty much in limbo the last few years as the debate about the location of the new main branch of the public library thundered on.

It's come to a head in the last several months as that section of buildings has slowly been abandoned by those who can move, while a few business have stayed in hopes that they won't lose the location that's been the source of their livelihood. The Family Thrift Store especially because it's been such an asset to members of the community of limited means. And because of this, the public gallery at council was packed on Monday as many spoke against the proposed plan in defense the business.

But now that the plan is passed, it's just a matter of time until eviction notices go out: about two weeks, actually. That's what the owner of the Family Thrift Store told my editor at Echo Weekly. He has two weeks to move out. If true that's unbelievable and unacceptable. If you've ever been in the Family Thrift store, you know it's veritably packed to the rafters on two levels, with a load of furniture in the basement and a ton of clothing, books and knick-knacks on street level. In fact, I had already heard that the store would have to abandon some things to demolition because they can't possibly move it all.

But two weeks, if true, is really hitting below the belt, and not just for the store but for the artist and musicians that rent space above the store. The city says in a press release that the Guelph Downtown Business Association would help affected businesses with their relocation, but come on - two weeks? Again, I'm not sure if this is true. It's third hand information that needs corroboration, and we're actually seeing if we can do a full-blown cover story about it for an upcoming issue of Echo.

Stay tuned for further developments.
Posted by Adam A. Donaldson at 12:36 PM 1 comment:

The Joys of Living in a Harperocracy 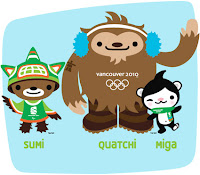 I heard a funny thing past weekend. A friend of a source said that at the official launch of the one year countdown to the Vancouver Olympic Games, our illustrious PM - refused to high-five the people portraying the mascots: Sumi, Quatchi and Miga. To recap: Prime Minister Stephen Harper had to be talked into giving the three Olympic mascots a high five.

He refused to do it. Just refused.

Being a square is one thing, but even squares have a sense of fun and will pursue it if given a right, swift shove out the door. But usually your PR guys don't have to spend five minutes explaining the mechanics of being cool. And before you say it, or think it, this is not a made up story. The names of sources are being withheld to protect the innocent because God knows Harper has a mean streak.

But why bother mentioning this? Is it news?

No, not really. But it does highlight what I think we're missing in our government these days, which is a sense of openness. I'm not talking about freedom and rights, but of something more simplistic. I don't want to say a "sense of fun" because that sounds frivolous, but its definitely what the hippies would observe as a downer. Yes, Stephen Harper is the ultimate Captain Bring-Down.

Now that's not a crime, but it seems that ever sense Harper came to office there's just been a little less whimsy in politics. Everything now is too partisan, too demonstrative, too wrapped up in the back-fighting and jingoism that makes American politics often so unpalatable. This isn't solely the fault of Harper and the Conservatives, mark you, but it's a top down effect. This is the government that said that the open green on Parliament Hill presented too great a security risk and now there's this whole High Five-gate thing, which just makes Harper look like the gym teacher from Hell.

But there's also this other matter, the visit of the U.S. President to Ottawa this Thursday. It's Barack Obama's first trip to Canada, and he's got a lot of fans here, but there's no public events through which to honour his first foreign visit. Thanks guys. He just pretty much single-handily changed shifted the tone of politics in America to a state of hope and optimism. Seeing him talk in Parliament would have been awesome, it's just too bad that nobody in authority seemed to want to recall the House.

The government's been clear that this is a working visit, and Obama's only here a day and there's a lot to do, but come on. Not matter if this is true, one can't help but feel that the share-averse Harper Conservatives didn't want Obama to steal their thunder, or the spotlight, which of course he would because so many Canadians think so much better of Obama than Harper. It feels wrong that for his first visit, Obama's doing a driveby, and although he's a busy guy, I highly doubt that if the opportunity was extended to for the President to speak in the House he'd say, No, I'd rather not.

If there had been something more public, I would have packed a bag and headed to Ottawa for Thursday. I like Ottawa, and Parliament Hill is awesome. So imagine my disappointment when the PM's flacks were all like, Not so fast buckaroo, Obama's going to be working not speechifying. Dollars to donuts though there's going to be some last minute thing for the public to enjoy making Harper look like the man that gave us Obama when we thought there'd be none.

And that kids is why even when Stephen Harper makes things look fun, they're still not fun. He's for carefully structured enjoyment, like the guy that wants to assign which Monopoly pieces everybody gets. Harper's got to learn that Canada's the country of the party train to Confederation; we didn't fight a war to get our independence, we just told the Queen how it's going to be, got loaded and woke up hung over with a nation.

So welcome to Canada, 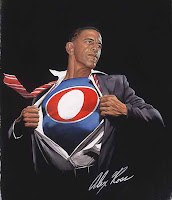 President Obama. Wish we were there

Posted by Adam A. Donaldson at 9:14 PM No comments: