This Blog Will Evolve 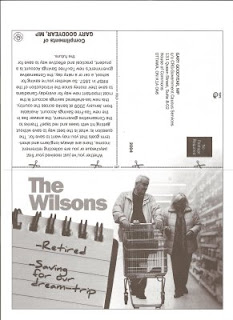 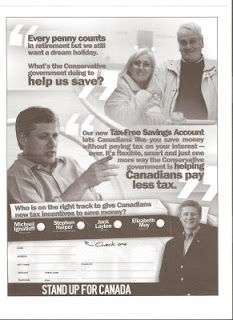 So I got this in my mail last week. Not exactly unfamiliar stuff if you've owned a mailbox in the last five years. Just another propaganda piece about how Harper's working for you, the little people, and how the Opposition is all about death and taxes and taxing you to death.

Cool, I can dig, not to mention read. The plights of these poor people, "The Wilsons," is of serious concern for me. They're trying to save for their "dream holiday," a lofty goal assisted by the Conservative government's new tax-free savings account that Stephen Harper seems so creepily enthusiastic about at the bottom of the second page.

"Who is on the right track to give Canadians new tax incentives to save money?" You get three guesses... But I have to ask, how many more people are struggling for more basic needs than saving for their "dream trip?" How many Canadians are struggling with the fact that they have no job and thus no money through which to save up enough to even buy a postcard?

But I didn't come here to rant about that. No, I rant because I got this piece of mail from Cambridge and North Dumfries MP Gary Goodyear. You know, the guy who's not my MP, and will never be my MP unless I move to Cambridge, which is not bloody likely because I already escaped from one big box hell, never to go back. Phew. So why did I got this from Gary? My guess is wasting money on pointless survey flyers is fun. Frankly, I can't even guess how many of these they actually ever get back.

Furthermore, economically speaking, I hope that this, what is basically tantamount to junk mail for people (not everyone can turn around and blog about it), isn't coming out of taxpayers' pockets, which I'm afraid it is given the fact that the return address is "CRG-Government Caucus Services... House of Commons." At least when the Liberals wasted money on golf balls, you got a golf ball.

But I digress, the real treat offered here is that Goodyear gave me the perfect segue through which to talk about his other faux pas, a little thing involving the fact that the Science Minister dodged a question about whether or not he believes in evolution.

Now one would think: Science minister/evolution, they should go together like peanut butter and jam. But in an interview with the Globe and Mail, Goodyear politely (I hope) refused to answer a question about whether or not he believed in evolution. Naturally, this was of some concern to Canadian scientists.

Goodyear didn't exactly recoup his loses the next day either, when he "cleared the air" about his feelings on evolution by saying the following: “We are evolving every year, every decade. That's a fact, whether it is to the intensity of the sun, whether it is to, as a chiropractor, walking on cement versus anything else, whether it is running shoes or high heels – of course we are evolving to our environment.”

For the file, it should be added that Goodyear is a chiropractor by profession, so science is not entirely unfamiliar to him. But let's be clear, this was his answer to the original question: “I'm not going to answer that question. I am a Christian, and I don't think anybody asking a question about my religion is appropriate.”

What does that say to you? To me, it says that either he believes in creationism, or he's stymieing his own thoughts on the subject because he has a party line to tow. Frankly, I don't care for either of those options.

Now my respected colleague and fellow blogger Andrew Prescott wrote a letter to the editor in the Guelph Mercury where he said that Goodyear was being vilified for his Christian beliefs, and that liberals (small 'l') were treating him unfairly and that he was being hassled purely on the basis of his religious beliefs.

Not quite. The trouble is that science says that the Theory of Evolution is the most likely, empirically vetted explanation as to how life evolved on this planet. When the Minister of Science quantifies a question about a scientific theory by casting it as an attack on his faith, it's time for a little bit of concern to be raised.

Basically though, it has nothing to do with what Goodyear believes. If, as a Christian, he believes that the Earth was created in six days by God, then cool, he's more than free. But you can't be science minister while that's your exclusive point of view. It's like the Pope being a Rabbi, both Catholics and Jews believe in one God and that the path to salvation is through Him, but everything else, from the sacraments to the ceremonies, is different. A rabbi can't be Pope, it's really that simple.

I don't think anyone wants to make a mountain out of a molehill with this, but with Barack Obama down south of the border finally throwing some US support to embriotic stem cell research, I believe it is was the hope of a lot of scientists that now we'd live in a time where religious doctrine wouldn't guide our scientific pursuits with a heavy hand. I sincerely hope that this is not the direction the Harper government is steering us towards.
Posted by Adam A. Donaldson at 2:41 PM No comments:

I get this on Friday, and after a busy weekend I finally get around to posting it. Call it a symbolic delay in honour of the cataclysmic one that's get this day pushed back from one deadline after the other for last few years. But to the release, which published a list of move in dates for city departments trading scatted distribution to provide services from a single location.

GUELPH, ON, March 13, 2009 – As the final touches are being completed at Guelph's new City Hall, City departments that have, until now, been based out of five satellite locations around the city, are preparing to make the transition into the building.

By April 7, roughly 300 employees will be working in the new state-of-the-art facility, providing a central location and more convenient access to all City services.

Workspaces, computers and telephones are moving into the building over the next three weeks. Below is a schedule of moving dates when residents may experience temporary interruptions.

As we reach the end of this improbable odyssey, let's keep all this in mind as we move forth on future capital projects for the City of Guelph. Before digging in to another multi-million dollar construction affair, I think something of a full accounting as to why this project ended up wildly overdue is in order. I mean, I know many of the reasons, and I've covered some of them, but it would be nice to learn how the City intends to avoid this kind of situation in the future.
Posted by Adam A. Donaldson at 9:51 PM No comments: 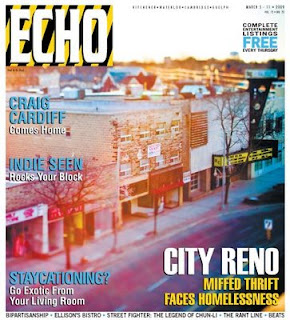 So you may have noticed, this week's Echo cover story was done by your's truly, and naturally, as these things go, you get the big detail right after your deadline.

So if you didn't hear, the Family Thrift Store will only be around as long as the month of March. An attempt to hammer out a new lease failed and Ray Mitchell says that he will be closing up shop at the end of the month. But it won't go without fanfare.

I caught up with Mitchell by phone on Thursday, and while I make mention of our discussion in this week's "Guelph Beat," I'm giving Guelph Politico readers a bit of sneak peak.

"So we're out of here at the end of the month, whether we reappear again... it's unlikely," said Mitchell. "But it's not about us, we're hoping that we can shame [the city] into providing something for the artists. They have to do something after all of this."

And something does appear to be happening. "I think we're going out with a seven-day music festival," he adds. Several local musicians and bands of old are apparently gathering to the give the store a grand send-off in what Mitchell says he's leaning towards calling "Thrift-stock."

"So rather than be negative, we'll be positive because that will make city hall feel even worse," he adds.

Mitchell also said that he's been getting a lot of letters of support and remembrance from customers past and present, and will put them all together in a collected scrapbook as a souvenir. Plus, there's all the media attention Mitchell's story's been getting, and he adds that the Mayor called him personally last Friday, which he sees as a direct response to media pressure.

"But at the end of the day I'm going to be the only one that's happy, my customers are the ones who are going to be worse off," Mitchell says with his typical resigned manner. "I'll be better off then where I am now, but it's not the way I wanted."

Read the original story here.
Posted by Adam A. Donaldson at 12:07 AM No comments:

Help Get Mitch out of Canada


He's made the news all over the frakking place, and all he's doing is applying for a temporary full-time position.

My friend and partner in Synn Studios, Mitch Moffit, wants an all expenses paid trip to Australia where he'll work at a six-figure job to help maintain the Great Barrier Reef. The contest is sponsored by Tourism Queensland in Australia, who launched this global search for the right candidate resulting in 34,000-plus applications.

Now the vote is one for the Top 50, and Mitch is one of 7 Canadians - 3 from Ontario - to make the final cut. At last check he had 7,402 votes and was in second place following a contestant from Russia. But Mitch's video, as I'm sure you've witnessed, has gotten accolades for taking a musical approach.

Along with being Synn Studios' F/X guy, Mitch is a "well-known local theatre personality" as phrased by the Guelph Mercury. He was last seen on stage last fall in the River Run's production of Beauty and the Beast as Lumiere.
To vote for Mitch, click here. You can vote once every 24 hours: http://www.islandreefjob.com/#/most-votes/watch/thxSlKVz3fo

Good Luck Mitch! We're all pulling for you.
Posted by Adam A. Donaldson at 9:54 PM No comments:

On Friday, LIMITS (or Land Is More Important Than Sprawl, if you will) held a press conference on the very land that they're trying to protect. They reiterated the need for great environmental assessment and a general reconsideration of the project on the basis of economic necessity and danger to the natural habitat. I couldn't make it out, unfortunately, but the Mercury had a decent article on the matter. Here's the link:
http://news.guelphmercury.com/printArticle/446576

Do you want to know what I think? Well, you're reading my blog so I assume that you do, but where's the need for new "sufficient employment lands" as Jim Mairs describes? Take a drive up in the industrial area, the Speedvale/Woodlawn West area, and take notice of all those empty buildings. I would much rather see this area - which is nearly becoming a brownfield dozens of blocks in size - redevelpoed as opposed to creating another wide expanse of brick and mortar. Especially when greenspace is sacrificed for the vaunted need for economic development, and when the area in question is nearly as much a part of Guelph as Cambridge is.

What do you think? Feel free to post.
Photo By Ryan Pfeiffer of the Guelph Mercury
Posted by Adam A. Donaldson at 12:12 PM 1 comment: