Shameless Self-Promotion for a Good Cause

Last week, I was at the A Time to Give Breakfast for the Guelph Wellington Volunteer Centre at the Arboretum at the University of Guelph. (Phew, that's a browser full.) Anyway, the reason I was there was because I was one of 10 filmmakers that made a short video about one of the marvelous volunteer-driven organizations in the Royal City. I drew Sunrise Therapeutic, which teams special needs children and adults with horses, giving them riding lessons meant to bolster their physical therapy through the interaction with the animals. It was a good cause and fun to do despite the short turnaround. Special thanks to Nick Montgomery, my officemate and cohort at Synn Studios for his technical assistance and expertise.


For more information on Sunrise, please visit their website.
Posted by Adam A. Donaldson at 12:21 PM No comments:

Images from the City Hall Switch

Last evening the doors of the Council Chambers at 59 Carden St. were closed for the last time after over 150 years of Guelph law and Guelph history had been made there. In a special session, Mayor Karen Farbridge officiated the literal and symbolic move to the new chambers in the recently opened building at 1 Carden St. Mayors and Councillors past came out to celebrate and share memories. My full accounting will be part of next week's "Guelph Beat" column in Echo, but in the meantime, enjoy these pictures. 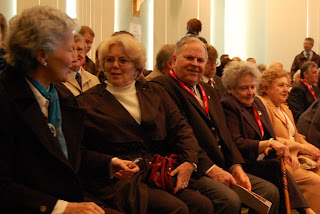 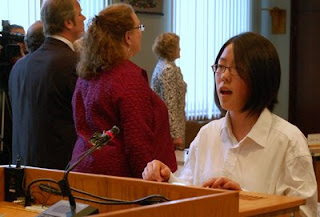 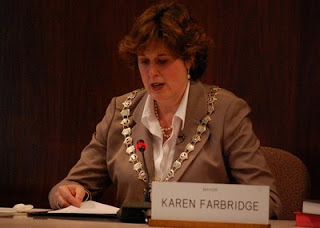 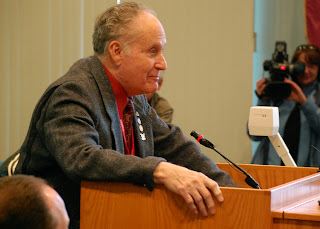 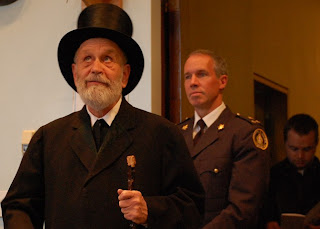 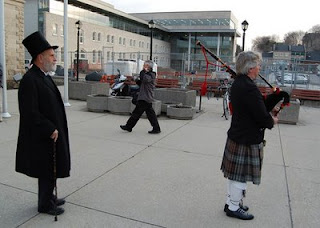 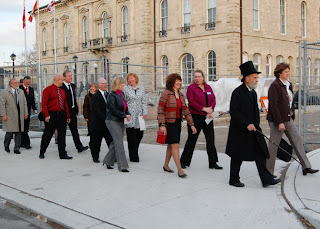 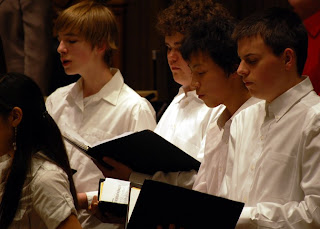 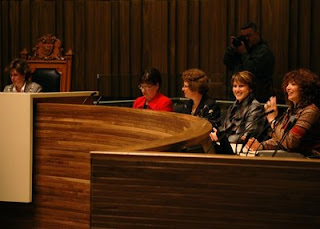 At least in a couple of categories according to Richard Florida, director of the Martin Prosperity Institute at the University of Toronto’s Rotman School of Management, in his latest book, Who’s Your City? Below you'll find how Guelph ranks amongst other cities in Canada, in five categories, in this convenient chart form:

But who is this dude? Here's his bio from the City press release: "Richard Florida is one of the world’s leading public intellectuals on economic competitiveness, demographic trends, and cultural and technological innovation. He is a regular columnist for The Globe and Mail and has written for The New York Times, The Wall Street Journal, The Washington Post, The Boston Globe, The Economist, The Harvard Business Review, and The Atlantic Monthly."

Also from the press release: "The revised Canadian edition of Florida’s international bestseller used a number of important factors to determine each city’s ranking; the percentage of the city’s population that fits a particular life stage, underlying economic conditions (regional economic growth and a measure of creativity, talent and tolerance), amenities and quality of life factors (arts and culture), and specific cost of living."

So there you go, so if you're single, in mid-career, have a family, or are retired, you've got it made in the shade here in the Royal City. Sorry, Empty-Nesters.
Posted by Adam A. Donaldson at 5:11 PM No comments:

I Want to Ride My Bi-Cyc-Le!

Bike riders of Guelph: Stay by your phones! Apparently, starting today, the city will begin a series of random telephone surveys to gauge how bicycling can be made safer and easier in the Royal City.

GUELPH, ON, April 15, 2009 – The City of Guelph hopes to learn about residents’ cycling habits and attitudes when it begins a random telephone survey today. The research is a first step toward making cycling safer and easier in the city.

The City will poll 400 randomly selected residents, age 16 years and over, about their cycling habits, how they feel about cycling in the city, and what would make them more likely to go by bike. Respondents can expect the survey to take less than 10 minutes.

"The majority of daily trips in Guelph are less than five kilometres, but only about 1% of those trips are made by bicycle," says Jennifer McDowell, the City’s Transportation Demand Management Co-ordinator. "The survey will help us identify where we can make improvements to make it easier, safer, and more convenient for people to cycle in Guelph."

Bicycle-Friendly Guelph, intended to make Guelph a bike-friendly city where 3 per cent of all daily trips are made by bike within ten years, is using a five-E approach to make cycling more convenient. "Using encouragement, education, engineering, enforcement and evaluation, Bicycle-Friendly Guelph hopes to triple the number of daily bike trips in Guelph by 2018," says McDowell.

The City expects the survey to reveal what motivates people to cycle more often, what challenges exist, and which routes would benefit most from improved cycling facilities. Environics Research Group will conduct the survey on the City’s behalf.

As Guelph learns to go by bike, the city reduces greenhouse gas emissions caused by daily driving, and increases community well-being through more active, healthy living.
So far, so good. Now I'm a biker rider, so I'll save the city the two quarters to call me and offer my advice.

First of all, there are worst places to be a bike rider, I've lived there.

But secondly, there's a respect gap, and I mean that for both riders and drivers. However, as I always point out: in the battle between bike versus car, there's no battle. I've seen cars and buses - at times - give very little regard to bikers even when they're in the bike lane; a lot of near misses. Guelph seems to have a consistent presence on "Canada's Worst Driver," which should tell you something. But I say again, biker's share responsibility for conduct on the roads: use you signals, watch traffic rules and remember that the right of way is not a right worth dying for.

Next is the fact that I had to spent 10 minutes searching online before I found trail maps for the City of Guelph. And personally, I find the City's website somewhat lacking in this area of coverage; the trail maps aren't found under the "Parks & Trails" section of the site, but under the much more generic "Maps" area along with Street maps, attraction maps, transportation truck and winter maintenance routes. One of the keys to getting more people on bikes, at least to me, is making the bike paths more noticeable and more known. That kind of relates back to the whole Car V. Bike thing.

Lastly, I suggest more bike routes, especially where I live in the west end. I live on the other side of the Hanlon, so if I want to ride my bike down to the south end, I have to backtrack back over the Hanlon again so that I can go on my merry little way. There's no trail I can ride, not even a road that leads anywhere but to another detour. The key is ease, not that I'm lazy, it's just that I don't want my route to a given destination to look like one of those 'Family Circus' strips with Billy and the dotted line.

But enough about me, what about you. What would you tell the City about biking in Guelph?
Posted by Adam A. Donaldson at 1:43 PM 1 comment: 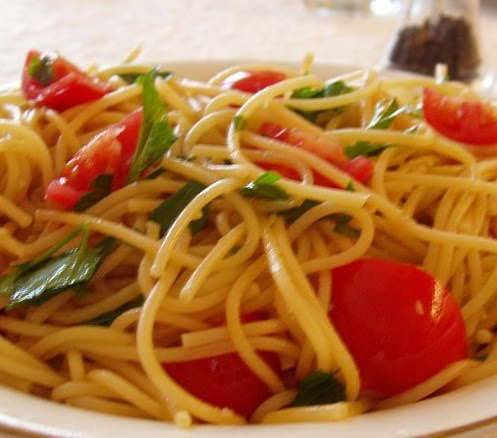 The City of Guelph has a large Italian-Canadian community, so it should come as no surprise that our fair berg should feel deeply affected by the devastating magnitude 6.3 earthquake in L'Aquila, Italy this past Monday.

Recovery contributions and fundraising efforts have been underway since Monday. So far, 287 people are known to have been killed by the quake, with another 20,000 people left homeless.

The Guelph Mercury ran a piece about the impact of the news on the quake for people living here in Guelph. Now, I've received this press release from out Member of Parliament about an event this Saturday. Please read below.
April 9, 2009
For Immediate Release

Frank Valeriote Voices Support for Local Earthquake Relief Efforts:
The Italian Canadian Club of Guelph’s efforts to raise relief money for those affected by the earthquake in L’Aquila, Italy are critical and timely, said Frank Valeriote, Member of Parliament for Guelph.

“This earthquake has caused the deaths of hundreds of people and left tens of thousands without shelter. My thoughts and prayers are with the people of Italy, and with the families and loved ones of those affected in Italy and in Canada. People, who are understandably afraid to return to their homes while aftershocks continue, require immediate help. I encourage all people of Guelph to come to Italian Club between 11am and 5pm to participate in this worthwhile effort,” said Valeriote.

On Saturday April 11, the Italian Canadian Club of Guelph will be hosting an all day pasta buffet fundraiser between 11 a.m. and 5 p.m. All proceeds will be directed to the relief of those suffering in L’Aquila.
Posted by Adam A. Donaldson at 3:16 PM No comments: