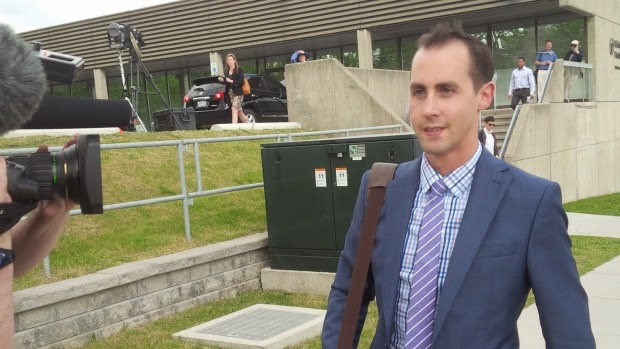 It was a long time coming, and to say that it was something of a disappointment is an understatement. Although many people wanted the trial of the century, what's clear is just how tenuous the case against Sona is, and maybe how badly this investigation's been bungled if this is the only case that can make it trial. In the details though, the case being tried in a Guelph court and scheduled to wrap up Monday with closing arguments has been fascinating. There's been personal betrayals, tall tales, stunning silences, and a startling lack of curiosity. In some ways, it's not a matter of how can anyone have gotten away with this, it's how could they not get away with it. In the case of the robocall trial there's no real certainty, even of the guilt of the accused. Here are a dozen of my observations from the trial.


You're off your case!
It was at times difficult to say who was being prosecuted, but I've often thought in the last week that the wrong guy got immunity and the wrong guy was on trial. To my recollection, Sona's name didn't come up once during the Crown's interrogation of RackNine CEO Matt Meier, and the defence was pivoting to Andrew Prescott from the first witness on down. Indeed, the trial seemed to do nothing to assuage the belief of the paranoid amongst us that Sona was the patsy and not the genuine criminal mastermind behind these doings, and the fact that the defence rested without a single witness or piece of evidence offered says that they don't think the Crown made its case either.
That was easy.
One of those surprising bits of testimony was the way in which Matt Meier administered his own service. With a fake name, some loose contact information and a Paypal account, "Pierre S. Jones" was able to get access to a system that even its gatekeeper admitted could be "mishandled." So how, on a Saturday night, with one phone call, could Jones get access? He had a referral: The Conservative Party. No one person, from the hundreds working on Conservative campaigns nationwide, just the party as an anonymous mass. I work at a hotel, and you need I.D., a credit card and/or an active direct billing account in order to use our service, and all we give you is a room to stay in for the night.
With friends like these...
The first witness, Chris Crawford, was a fellow University of Guelph student with Michael Sona, and they spent a summer in the Conservative Party internship program together. Andrew Prescott was a well-known Guelph blogger whose ideology lined up with Sona, Crawford and others. Ken Morgan was the man that brought them all together and gave them positions of authority in the Guelph campaign. They trusted each other. They had a goal in mind, and were supremely dedicated to make the dream of a Conservative majority a reality. But when the time came to pay for their actions, they ate each, and threw one of their own under the bus. On Wednesday, no looks were exchanged between Sona and Prescott, which suggests just how far things have gone. They were the guys who once tried to campaign to have Conservative students implanted in OPIRG to tone down the progressiveness, and now they don't talk to each other. How the mighty have fallen.

That's not very Christian (Conservative) of you
In a small but bizarre detail when Andrew Prescott took the stand, he affirmed rather than swear on the Bible. Isn't that funny? A man who calls himself Christian Conservative Independent not swearing on the Bible, almost as if he didn't want to sully it...
It's okay, I don't respect him anyway
Given that my mother is a devout Anglican who, despite not exactly being Warren Buffet, will "cast bread on the water" and give change to homeless people when she sees them, I've always thought that Christians were supposed to lead by example. In other words, if you're supposed to be trying to build an upstanding, moral society, then that's how you act. But Andrew Prescott seems to ride a fine line there. He was asked by Michael Sona's lawyer Norm Boxall about "pranks" pulled by the Burke campaign against their main competitor, Liberal Frank Valeriote, including a bingo sheet of frequently used phrases left on Valeriote's podium prior to a debate. (It's unclear though it this was one of the many debates that Burke took a powder on.) "Is that consistent with your morality?" asked Boxall. After a pause, Prescott said, "Yes, because Frank Valeriote‎ is the individual who, of all the members of Parliament, I don't respect." Well, I guess that makes it okay.
What draws my admiration?
Amongst the testimony Wednesday from Andrew Prescott was a story about the campaigners toasting the new majority government of Stephen Harper, and Michael Sona's off the cuff remark saying something to the effect of "Thanks Pierre" while holding a cigar. First of all, the cigar was a nice touch. Second of all, doesn't it strike anyone as weird that the Marty Burke campaign, while jubilant about the greater victory, made no mention of their own loss. But what really gets me is how staged this story of Prescott's is. It's rank super-villainy that there they were, in the midst of a friendly gathering of self-congratulation and back slaps, when Sona takes a victory lap to raise a glass to Pierre Poutine, presumably with all those in attendance missing the reference. Hearing Prescott's "memory" of the evening in question, I couldn't help but think of this:


Immaturity.
The above mentioned bingo card prank is one thing, it's silly and juvenile and but ultimately kind of harmless. What's more troubling is that several witnesses have talked about "American-style politics" or "various nefarious activities that could be fun to do, or could happen to someone else." It's more than a little disturbing to me, perhaps in hindsight, that political players are sitting around having a good time, joking about undemocratic actions against other campaigns. Especially when they are the supposed party of upstanding dedication to public service and transparency.
Other Facts Not in Evidence
It seems that the cigar salute to Pierre is one of the little details that made everyone think Michael Sona was the man behind the robot. According to Benjamin Hicks, a staffer in the PMO, it seemed like Sona was downright jubilant about his involvement in the scandal, comparing himself to the weekly TV adventures of counter-terrorism agent Jack Bauer in 24. An intern named Mitchell Messom recalls telling Sona to "shut the f--k up" about his robocall stories, only to run into him after the robocall story broke in March '12 to have Sona ask him, "Do me a favour, do not speak to anybody about what I told you." The Tory staffers all said that Sona liked to tell stories and exaggerate, but how much of all this can we trust? Messom, for instance, recalled Sona saying that he had bought prepaid credit cards at a gas station, when we all now know they were bought at two Shoppers Drug Marts. Was that purposeful misremember, or is that genuinely what Sona said? And if Sona did say it, was he trying to throw people off the legitimacy of the story by flubbing one of the details? It all seems rather weird given the options.
No Marty Burke?
Why was the candidate so inconsequential in the trial? I understand plausible deniability, but Burke has no value as a character witness? He was so far out of the loop on his own campaign, he couldn't even offer any insight into his campaign team and the work they were doing? He has no suspicions? No doubts? Despite being chased by every local media outlet and most of the national ones, Burke's silence remains as stinging today as it did during the election, and there were a lot of expectations that Burke might finally be heard on the witness stand. Still, Burke's only form of communication remains the Guelph Mercury letters page where he occasionally let's growl like a tired old lion trying to frighten us with his roar. Burke was the second biggest MIA of the trial.
Ken Morgan. AKA Miguel Sánchez. AKA Dr. Nguyen Van Falk. If Sona thought he was living in a season of 24 then Morgan is living The Bourne Identity. It was over a year ago that Morgan "took a teaching job" in Kuwait and disappeared without a trace. Well, mostly. Still, it would have been nice to hear from the Invisible of Man of Guelph, or "Disappearance to Arabia" as I like to call him, especially since Prescott tabbed him for being in on the robocall misdirect. According to Prescott, it was Morgan who handed him a piece of paper with the log-in info for Client #93, AKA: Pierre Poutine/Jones, and then asked him to cancel another pending robocall from that account. Really? And where did Morgan get that info? Shouldn't the campaign manager be required to talk about the bad actor(s) who were working under his command? Interestingly, Prescott says he reached out to Morgan earlier this year and said he could see about getting his old boss an immunity deal. I wonder if Morgan plans on spending the rest of his life abroad like some kind of politico Roman Polanski.
Outcome Conundrum
It's fairly safe to say that the case against Sona is pretty thin, but what is the outcome of all this going to be? On the one hand, Sona could go to prison and/or be fined, and if he is just the patsy, then that's unfair; as it is his career, at the age of 25, is ruined. On the other hand, these are the only charges to be pressed out of the entire robocalls investigation, which was shut down weeks ago after finding no evidence of a broader conspiracy. To a lot of people, if no one goes to jail for the robocalls then a huge miscarriage of justice will have been committed. Of course, we want that to be the right person, and right now, there's a huge question mark as to whether or not Sona is that right person.
Lessons Learned
One of the frequent reposes of this past week on the stand is recall, or lack of it. True, investigations take time to do thoroughly and competently, but this matter came to trial three years and a month after the offense was commited, and the investigation didn't really begin in earnest until nearly a year after Election Day 2011. I would say that if this should happen in the future, then Elections Canada needs to be more responsive, but in the event that the Fair Elections Act becomes law, it means Elections Canada's investigative function will be taken out of their hands.
Posted by Adam A. Donaldson at 12:35 AM