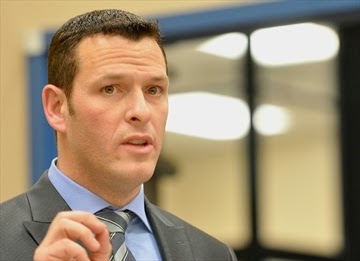 "It's the economy, stupid." That was once of the three messages that Democratic strategist James Carville created for Bill Clinton's 1992 Presidential Campaign, and it worked. "It's the economy, stupid," might as well be on Anthony MacDonald's campaign signs because if there's a four word message from our interview, I think that is it. According to the Progressive Conservative candidate, and I quote, "there's nothing more important than the economy." The question is though, will Guelph think that MacDonald is the right man for the job and send him to Queen's Park as its Member of Provincial Parliament?
Professionally, MacDonald is a horse owner, trainer and driver, and it was in that capacity he entered politics. After speaking out at numerous events about the cuts to funding of the horse racing industry in 2012, MacDonald was approached by the PCs to run in Guelph, and as he told me in the podcast, it took them a while to win him over and convince him to run.
Economy talk took up the lion's share of our conversation, but from the perspective of the PCs' One Million Jobs plan and their desire to cut corporate taxes. We also talked about PC leader Tim Hudak and the popularity gap he faces, and why maybe that doesn't matter in the grand scheme of things. (Interesting side note: the interview was recorded this past Tuesday, shortly before the televised leader's debate.)
You can stream the episode here, or download it from the source here.


The theme music for Guelph Politicast is "Volksing Ferretismico" by Goto80 and the Uwe Schenk Band from Silent Movie Pianos 1 - Action and Marches.

And as with previous podcasts featuring provincial election candidates, there's a video segment. Find out what representing Guelph at Queen's Park means to Anthony MacDonald below:


The music used in the "What does it mean to you to represent the people of Guelph at Queen's Park?" video segment is "Good to Go" by Josh Woodward from The Simple Life Pt 2 available on freemusicarchive.org.

For more information on Guelph candidates, or to learn how and where to vote, go to Elections Ontario's website wemakevotingeasy.ca.
Election Day is June 12, so please - GO VOTE!