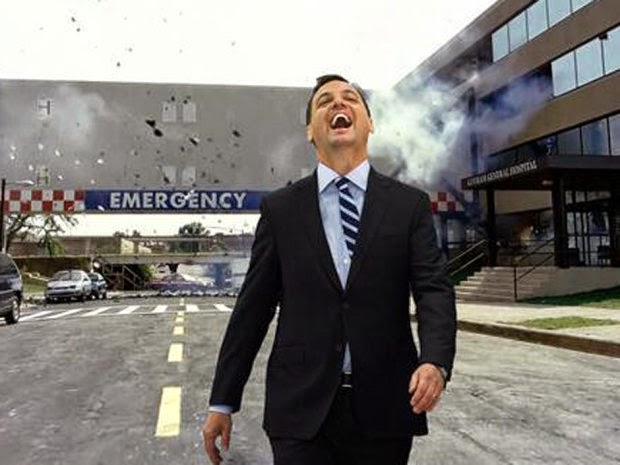 As the last day before the 2014 provincial election heads off into the sunset, it seems timely to leave you with a reminder to get out tomorrow and exercise your democratic franchise. But no, there's just too much bat $#!% craziness happening on the campaign trail right now. This last full day of the campaign was filled with shenanigans from all sides; misleading letters, bad taste in Photoshop, and enough sign vandalism to shake a stick at, and then use that stick to vandalize some election signs. Ladies and gentleman, this was your last day of Decision 2014. The day decorum died.
The above picture is the to-do today. It's from a flyer, a door hanger to be precise, sent out by Liberal MPP Steven Del Duca to constituents in Vaughan and it features an image of a laughing Hudak photoshoped on to a still from the Batman film The Dark Knight, in a pivitol scene where The Joker follows through on his threat to blow-up a hospital. The implication being that a vote for Hudak is a vote for the institutional destruction of Ontario's healthcare system.

“The character, who you have depicted Tim as, is the villain from the film, a murdering terrorist,” wrote Hudak campaign manager Ian Robertson in an open letter to the Liberal campaign co-chairs.
“Tim and our team have broad shoulders … (but to) suggest he would blow up a hospital shows just how unhinged you have become.”
Of course, this isn't the first time The Joker has been used to tar and feather a candidate in white face paint and green hair dye. Just ask this guy: 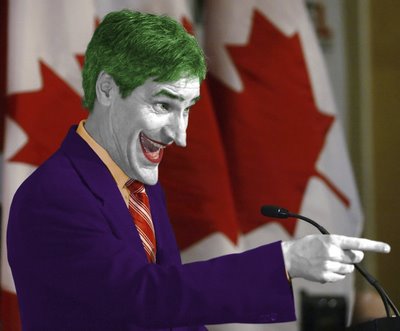 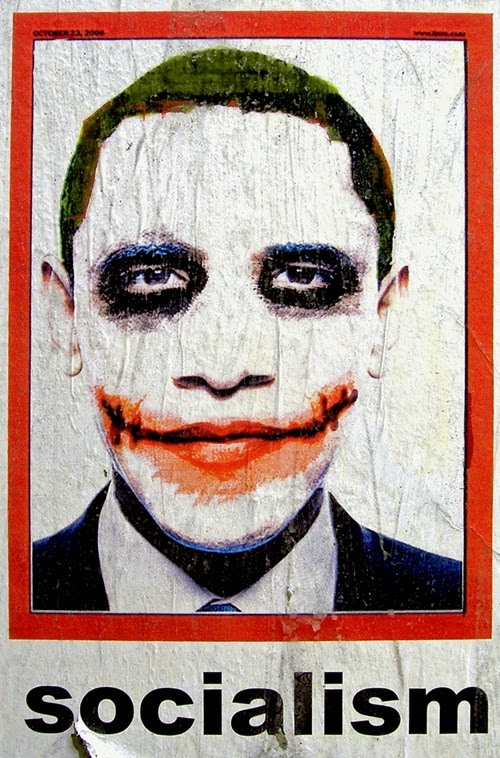 .@timhudak Please accept my apology. The flyer was a mistake for which I am sorry. #onpoli #voteon
— Steven Del Duca (@StevenDelDuca) June 11, 2014

It seems like just yesterday that the Liberals were the ones complaining about the dirty tricks of the PCs. Actually, it was just yesterday. The Liberals filed a complaint with Elections Ontario that misleading letters were sent to constituents in Ottawa and London ridings that feature erroneous statements about where to vote on Thursday. There are also some eerie similarities to the misleading robocalls in the 2011 Federal election.
In London North Centre, the letter begins, "I wanted to remind our friends and neighbours that this Thursday June 12th is Election Day." The signatory is supposedly Tim Gatten, a constituency assistant for Susan Truppe, the federal Conservative MP for the same riding.
"This election my wife and I are planning on voting together ensuring our voice will be heard.... Our plan is to drive together to the Ridgeview Community Church at 1470 Glenora Dr for the opening of the polls at 9 a.m.," it continued, followed by the address of the church of the date of the election. "Maybe we will bump into each other at Ridgeview Community Church!" it concluded.
The letter sent to Ottawa-West Nepean votes was oddly similar. "I will be voting on my way home from work, but well before the polls close at 9 p.m.," it read, a woman named Saxon Harding is its alleged author. "I plan to just walk over to St. Paul High School.... I hope that you have a wonderful summer, and maybe we will bump into each other at St. Pauls."
Back in London, the PC candidate was quick to offer apologies. “I want to apologize for any inconvenience,” wrote PC candidate Nancy Branscombe. She told the CBC that the 64 letters sent out were the result of confusion by some volunteers and there was nothing malicious about it. “We are contacting these households to clarify.”
In Ottawa, the eerie similarity of language in statements continued. "Today, we were made aware that letters to voters in the campaign may have caused some confusion for a small number of residents in the riding of Ottawa West Nepean," read the email from the Ontario PC Party. "We apologize for any inconvenience and have contacted these households to clarify."
Then there's the tried and true method of dirty politicking, the vandalism of signs. It's happened here in Guelph, but it's also struck in Toronto,  Windsor,  Ottawa, and Sudbury.
All this will do is insure that more people will be turned off the political process and not bother to show up to the polls. I know that that's the point with some of these tactics, but for people who claim to love democracy it's a bizarre and demented conundrum that those people should be putting so much effort into getting people not to vote rather than, I don't know, convincing people of the power of their candidates nomination and why they deserve to be elected.
And that maybe the issue with this election, no one's really convinced anyone other than the base that they deserve to form a government. Over one half to two-thirds of the people in the province think we need a change of government, yet if the polls are to be believed, the make up of that government will remain relatively unchanged on June 13 from what it was on May 2. Of course, the polls could be wrong and a tremendous groundswell of PC or NDP support may be in the wings. The Liberals and PCs are practically tied in support from likely voters, and the NDP is the only party with anything resembling forward momentum, but they were so far at the back of the pack from the start, can they hope to make it a real three-way race? And what of Mike Schreiner? Can he make that breakthrough the Greens are looking for in Guelph?
On Election Night I will be part of the Gang of Four team coverage on CFRU 93.3 fm here in Guelph, You can also listen online at cfru.ca and or on Channel 948 on Rogers Cable. We'll have all the latest results and analysis from Guelph and around the province starting at 8:30 pm.
Happy Election Day!
Posted by Adam A. Donaldson at 9:05 PM