This Week in Guelph Beer News 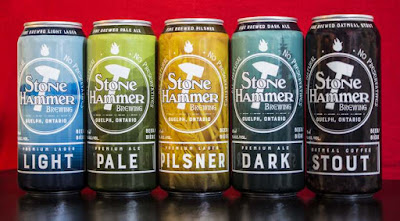 We don't often talk about beer here on Guelph Politico, but sometimes circumstances warrant the stretching of this site's normal beat, and here we are, about to talk about beer. And for local beer lovers, this is going to be a good news/bad news situation.


Bad news first, it seems like this is the end of Stone Hammer Brewing, the venerable Guelph brewer that opened its doors in 1995. A website called Ben's Beer Blog is reporting that Stone Hammer will soon announce its closure, although the website's creator, Ben Johnson, admits that he was unable to get confirmation from the brewery itself.
"While I have not been able to reach the company for confirmation, I’m told that last week employees were told to head home and asked not to return and that production of beer had ceased permanently," Johnson, voted Ontario's Best Beer writer for the 2017 Golden Tap Awards, wrote.
Stone Hammer is certainly not acting like their going to close, at least not publicly. On their Twitter feed, Stone Hammer is promoting an appearance at the I Heart Beer and Bacon Show this weekend in Guelph.
So why might Stone Hammer stop all brewing? According to Johnson, too many craft brewers, and not enough room in the retail landscape for all them, which he pegs at around 250. "[T]he growth has been exponential and it has, thus far, not been met with equally exponential growth in opportunities for brewers to actually sell their beer," he wrote.
"As I’ve lamented elsewhere on numerous occasions, there are still just four places that brewers can sell closed containers of their product in this province: the state-run LCBO, the big-foreign-brewery-owned Beer Store, a brewery’s own onsite retail space and, as of 2015, a smattering of grocery stores," Johnson added.
But there is better beer news for Guelph connoisseurs this week. Wellington Brewer has announced a partnership with Guelph Pride to release an official beer for this year's Pride festivities, according to Canadian Beer News.
Called Sunshine, the new brew offers a "refreshing blonde ale [that] is brewed with hibiscus and raspberries giving this fabulous beer a bright pink glow and vibrant berry flavours." Aside from a refreshing drink, Wellington will also give 25 cents from each can to Out On The Shelf, Guelph’s Queer Library and Resource Centre, according to Wellington's website.
Wellington will officially be launching Sunshine this Saturday at release party at the brewery on Woodlawn Rd from 12 pm to 5 pm. The beer will be available online, at the brewery, at at various Guelph Pride events through May 14.
Posted by Adam A. Donaldson at 8:00 AM