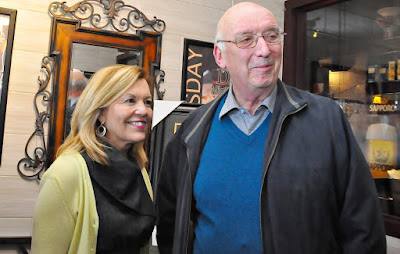 It what was already a busy political day in Guelph when an announcement from Progressive Conservative headquarters offered one more surprise: Ray Ferraro is one of 11 candidates acclaimed across Ontario today to complete their province-wide slate.


The Guelph PC website had a small, unassuming message about the candidate selection. "We are excited to announce that our Guelph PC Candidate is Ray Ferraro," the statement reads. "Ray Ferraro is a former Guelph City Councillor and a lifelong community resident who is passionate about serving the people. Ray worked with the Ontario College of Podiatrists and Chiropodists for 10 years, and as a local real estate development consultant.
"Together, we will help defeat Kathleen Wynne and the Ontario Liberals by winning ridings across the province - starting right here in Guelph," it concludes.
The news release from the leader's office was a little more ebullient though.
“Help is on the way. We are only 47 days away from defeating Kathleen Wynne’s government and giving Ontario the change it needs,” said Doug Ford in the release. “We have a strong team of candidates who are committed to delivering change that works for the people. It’s time for a government that respects the taxpayer, a government that keeps its promises and puts money back into your pockets.”
The move did not well with some people that already left the PC Party over moves like this.

Tysick is the leader of the Alliance Party of Ontario, which is made up of a lot of former PC Party members befuddled by the nomination process in numerous riding associations. Over a dozen nomination battles during the tenure of Patrick Brown as leader of the PC Party had allegations made about irregularities in voting or process.
Earlier this year, the PCs overturned several of those controversial results, including the Hamilton West-Ancaster-Dundas riding that saw police investigating allegations of ballot stuffing.
Among the other 10 ridings with new candidates today are Scarborough Centre, where the results of the original race were overturned in February, and Barrie-Springwater-Oro-Mendonte, where the previous candidates was Patrick Brown. Michael Harris, who was removed from the PC caucus earlier this month after it was revealed he sent sexually suggestive texts to an intern in 2013, will be replaced by Mike Harris Jr., who is the son of yet a third Mike Harris, the former Premier of Ontario.
Posted by Adam A. Donaldson at 4:44 PM