Mlynarz is the NDP Candidate for Guelph 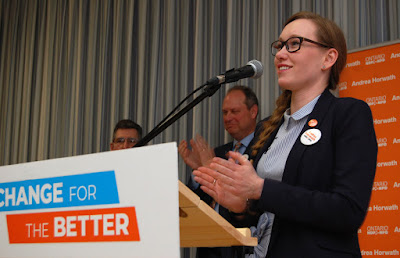 
Mlynarz was acclaimed at a Saturday afternoon meeting in a packed community room at the Evergreen Seniors Centre. The recent grad school graduate, sometime filmmaker and actress, and sometime activist received the more votes than her challengers, labour advocate Andrew Boscombe, and community activist Mike Foley.
“I am honoured to have Andrea Horwath here today, and I am proud to be running with an NDP team that represents the change that our community needs,” said Mlynarz in a release after the meeting.
"We need change in Guelph, but the Doug Ford Conservatives represent change for the worse. Ford has promised to cut and privatize our public services even more than Wynne has,” she added, “and he has no plan to make life more affordable for families or students, or protect our environment.”
“New Democrats will bring change for the better to this community.”
See video from Mlynarz's acceptance speech below:

And Andrea Horwath Stopped By...


The leader of the Ontario NDP made Guelph one her stops on Saturday, and spoke to the gathered NDP members before the vote.
"I love Guelph, it's a great community, it's certainly a community that has a great deal of shared values with the NDP, it's a very progressive community, and it's an exciting, contested nomination with three candidates," Horwath said after her speech in a media scrum.
"As leader it's really great to see, it shows that there's excitement, that there's momentum, and that people are engaged in the opportunity this riding represents."
On the stump, Horwarth said that the NDP will campaign on healthcare, education, affordability, equality, and the environment, including Guelph sweet spots like the protection of water rights.
"People here are working harder and harder to make ends meet," she said. "Fewer and fewer stable jobs are available - good jobs, well-paying jobs - and everyone is feeling the squeeze. But Guelph families and New Democrats are working hard to make life better because that what we do."
Attacking her rivals, Horwath said that Progressive Conservative leader Doug Ford's "bumper sticker talk," can't hide his intentions to make devistating cuts to the province. "I don't think Doug Ford's Conservatives are the answer," she said. "We all know that is not change, and that there's a plan to do even more damage than what's been done by the Liberals. Families in Guelph deserve so much better than that."
As for those Liberals, Horwath noted "hallway medicine", "out of control hydro bills", and "rundown schools" as reasons not to re-elect the Liberals. "Any promises that Kathleen Wynne makes now, she's had 15 years to get those things done. I don't think people are buying it anymore," she added.
"New Democrats have a plan that offers hope to actually move this province forward instead of dragging it back," Horwath said. "We're going to elect a proud New Democrat  here in Guelph who's going to be part of an NDP government June 7."
On Guelph matters, Horwath told members of the media that she's committed to high speed rail, but the issue is bigger than the immediate 401 corridor.
"We're absolutely committed to making sure we move forward with the high speed rail line, we're absolutely committed to seeing that though," she explained. "It's not only the line that's important, but it's also how do we tie in the surrounding communities in terms of regional transit systems, and increase the impact of that investment. That, throughout southwestern Ontario, is going to be an issue."
While Horwath talked to the NDP, the Green Party was down the road at the Hanlon Convention Centre holding their own rally. Horwath added her voice to the chorus of over 10,000 Ontarians saying that Schreiner should be able to take part in the televised leaders debate.
"There's no reason not to have Mike Schreiner there," she said. "These things are decided by the consortium, but I was happy to have Mike at the debate we had with the Black community in Toronto, and the panel discussion we had a Ryerson. I think that the more discussion about public policy we have from various perspectives is better."
With reporting by Scotty Hertz.
Posted by Adam A. Donaldson at 6:47 PM