Things We Learned at the Ward 5 Town Hall 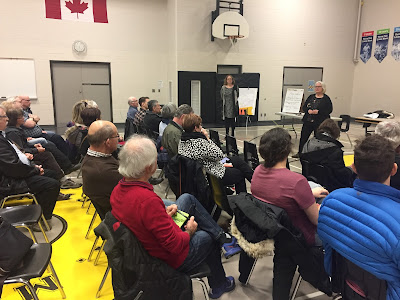 Although not the same draw it was back in the fall after Homecoming, a Ward 5 town hall last night at St. Michael Catholic School brought over 40 people out to hear from their city councillors and city staff about the progress made in preventing another excess of partying, and to hear about student housing issues.
City of Guelph senior staffers Bill Bond, Senior Bylaw Administrator, and Pat Sheehy, Program Manager-Zoning, were on hand to talk about housing issues. Ward 5 Councillors Leanne Piper and Cathy Downer were there to hear residents' concerns and to facilitate the discussion. Here's some of what we learned over 90-someodd minutes.