Suzuki, May, and Cast of Thousands Rally to Support Schreiner 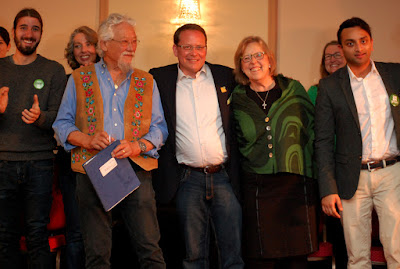 It was an afternoon of song and dance, spoken word, fiery political rhetoric, and hope that Guelph's future, in the short term, will be Green. The campaign for Green Party Leader Mike Schreiner held what was billed as the "largest political rally in Guelph history" Saturday at the Hanlon Convention Centre.


After the crowd was warmed by local artists, Schreiner himself was usher into a room with flashing lights and dance beats, about 1,000 supporters welcomed him like he were a returning champion about to enter the wrestling ring . The candidate himself gave some brief opening remarks in front of about two dozen other Ontario Green candidates calling for a change to politics as usual, and the need to "put people and planet first."
Schreiner praised Guelph for it's environmental leadership on water and clean energy, and he touted his own record by talking about how the Green Party led the charge to get big money out of Ontario politics, and helped fight to save the experimental lakes area. "When somebody asks me, 'What can one MPP do?' I want to say, 'Look at the change we delivered before having an MPP at Queen's Park; imagine the change I'm going to deliver to Queen's Park when I'm Guelph's MPP!'" Schreiner declared.
To his political rivals, Schreiner was blunt. "Everywhere I go, people tell me they're tied of the establishment party that has governed Ontario for the last 15 years, and they're telling me that they don't trust the establishment party that's shown it cannot even govern itself for the last two months," he said.
Promising to change the status quo, and make everyday Earth Day at Queen's Park, Schreiner threw it to one of his special guests: David Suzuki.


Suzuki has tended to shirk party politics in the past, but the environmentalist and TV host was rather blatantly political in his remarks. Suzuki said he "came out of the closet," politically-speaking, when he supported B.C. Green Party leader Andrew Weaver, and explained that the rapid shift in climate has made him want to take political action.
"I have two five-month old grandchildren, and as I look at them, I really wonder, if scientists are right and we're going the direction we're going in, then they won't live out a full lifetime," Suzuki said. "That fills me with anger that the people we elect to office are avoiding dealing with reality. That the very survival of future generations is as stake."
Talking about the science of climate change and its threat, Suzuki said he believed that there should be no such thing as a "Green Party" because stewardship should be everyone's responsibility. He called it a "great challenge" to develop an economy that balances the needs of people and the needs of the planet. 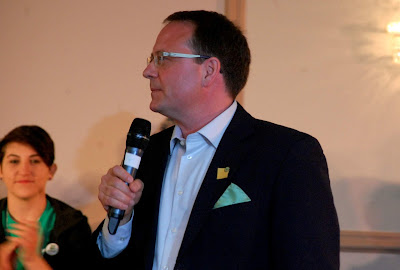 Teetering to the pessimistic, Suzuki said that environmentalists are still having to fight battles they thought won 30 or 40 years ago. "Over and over again, what I'm finding is that what we thought were victories in the environmental movement turned out to be pyrrhic victories, they were illusionary. They were just temporary stop gaps because we didn't change the way we see the world."
Suzuki blamed the shortness of vision in politics. That as soon as a politician is elected, their biggest priority is to get re-elected, and that means showing results. Tough to do when environmental issues play out over decades.
In summation, Suzuki thinks that supporting the Green Party is the answer. "We need more of them in office," he said. "Mike will get in only if each of you recruits three or four people to say, 'Yes, I'm going to vote Green,' and that's the way this will become a wave." 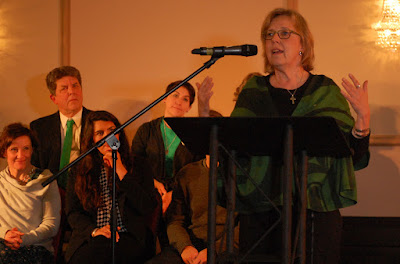 The final speaker was Federal Green Party leader Elizabeth May, fresh from her own environmental activism in B.C. getting arrested at the construction site of the Trans Mountain Pipeline. May was ready to fight anyone that said economic and environmental concerns were not one and the same.
"Herman Daly, who was senior economist at the World Bank, defined the relationship between the environment and economy this way: The economy is a wholly-owned subsidiary of the environment. You don't balance a subsidiary with a parent," May explained. "If you want your economy to survive the environment has to survive; there are no jobs on a dead planet."
May said the goal should be full employment, good wages, and for those struggling below the poverty line, a basic guaranteed income should be created. May took the Federal Liberals to task for promising to reduce greenhouse gases while raising them at the same time by supporting pipeline construction. "When I hear [Environment Minister] Catherine McKenna say that the environment and the economy go hand-in-hand, I picture Thelma and Louise at the wheel," she joked.
As for Schreiner's efforts, May promised that electing Green politicians was a vote for not whipping MPPs, and for greater representation. "No matter what happens, and no matter how many Greens are elected with Mike, you can count on one thing, Mike won't be whipping votes," she said. "We are committed in every instance to listening to our community, and voting the way the community wants them to vote."
Posted by Adam A. Donaldson at 10:30 PM