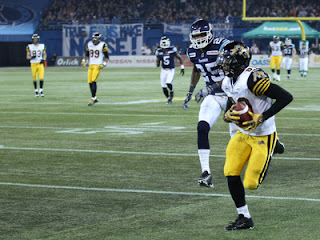 It was at one time thought a deal not done, but the announcement today shook both the worlds of Canadian football and the City of Guelph: the Hamilton Tiger Cats will indeed be playing next season at Alumni Stadium at the University of Guelph.


It's great news all around. For the City it means a boom in tourism and local traffic, as many of the Tiger Cats faithful will make the pilgrimage from Steel Town to the Royal City to see their time. For non-Tiger Cat fans, like my mom and my sister who are Argos fans, they'll be able to see their favourite team a little closer to home, including the vaunted Labour Day Classic. It's still curious, given the changes that the Ti-Cats organization are requiring of the U of G, why some consideration between the CFL team and McMaster University couldn't have been reached, but I suppose Hamilton's loss will Guelph's gain for the 2013 CFL season.
In case you didn't know, the homelessness of the Hamilton Tiger Cats stems from the demolition of Ivor Wynne Stadium, the Ti-Cats home for some 80-plus years. The new stadium will completed in time for the start of the 2014 season.
Interesting side note, the Toronto Argonauts used to hold their training camp at the U of G. I remember finding pictures in some editions of The Ontarion when I worked there.
Here's the press release from the University of Guelph about the Ti-Cats moving in
The Hamilton Tiger-Cats of the Canadian Football League (CFL) hope to make the University of Guelph their home for the team’s 2013 season.
The team and the University have signed a memorandum of understanding that could see the Tiger-Cats playing their home games next year in U of G’s newly renovated Alumni Stadium. The Tiger-Cats’ regular home venue in Hamilton -- Ivor Wynne Stadium -- is scheduled for demolition this month. A new facility will open in Hamilton in 2014.
“We are delighted that Guelph was chosen,” said president Alastair Summerlee.
“It reflects the quality of the upgrades that we’ve made to Alumni Stadium and speaks to the reputation of the University and the City of Guelph. It will also help raise our profile, support the continuing expansion of our athletic facilities and bring business to Guelph.”
Guelph Mayor Karen Farbridge said: “I am excited that the Hamilton Tiger-Cats have chosen Guelph as its home for the team’s 2013 season. We are happy to host them and welcome all the fans to our beautiful city.”
Lloyd Longfield, president of the Guelph Chamber of Commerce, added: “This is wonderful news for the City of Guelph. The spinoff benefits for business and tourism will be enormous.”
The tentative agreement identifies a number of logistical issues that need to be addressed prior to a final decision, said Brenda Whiteside, associate vice-president (student affairs), who oversees the Department of Athletics. She added that discussions will take place over the next few weeks.
Tiger-Cat games will be scheduled around U of G athletics and other events, Whiteside said.
Alumni Stadium has more than 4,000 permanent seats and a capacity of close to 10,000 for homecoming games. The Tiger-Cats and the University will work together to maximize the capacity of the facility while respecting the constraints of the site, Whiteside said. This includes making temporary premium hosting areas available around the field and erecting temporary spectator stands on the stadium’s east side for Tiger-Cat games.
Scott Mitchell, Tiger-Cats president, said: “We think our fans will love this solution. It’s also a perfect fit for our very successful regional marketing campaign, and we look forward to working with the University to make this happen.”
This year’s improvements to Alumni Stadium included installation of new artificial turf, an eight-lane International Athletic Federation-certified track, new lighting and a state-of-the-art video scoreboard.
Tom Kendall, U of G’s director of athletics, says sports and recreation facilities and programs help attract and retain students. “We recognize the importance of a healthy lifestyle for student success. These changes will allow us to continue to be leaders in student support."
Proceeds from the agreement will support the Gryphon athletics fundraising campaign. As part of U of G’s BetterPlanet Project, the Gryphon campaign is expected to help fund a new fitness and recreation complex.
Posted by Adam A. Donaldson at 9:30 PM