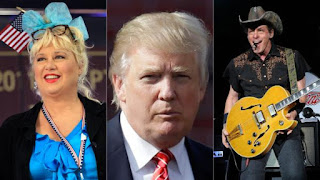 Donald Trump got a lot of press - and let's face it, that's what we likes best - about his now deleted, explosive and borderline treasonous reaction to Barack Obama's re-election on Tuesday. "He [President Obama] lost the popular vote by a lot and won the election. We should have a revolution in the country," Trump Tweeted as the vote was still being counted before adding, "Lets fight like hell and stop this great and disgusting injustice! The world is laughing at us."
But would you believe that Trump wasn't alone as high profile conservatives tweeting crazy things on election night?
"Goodluk America u just voted for economic & spiritual suicide. Soulless fools," wrote Ted Nugent, musician and stereotypical hillbilly. "What subhuman varmint believes others must pay for their obesity booze cellphones birthcontrol abortions & lives."
That would be the American people, but whatever. Maybe former Saturday Night Live actress and one time X-Files guest star Victoria Jackson can give us some moderation.
"I can't stop crying. America died," she tweeted. "Thanks a lot Christians, for not showing up. You disgust me," she added before concluding, "The Democrat Party voted God out and replaced Him with Romans 1. In the Good vs. Evil battle...today...Evil won."
So that went well. But at least these people, these high-profile "celebrities," are the exception to the rule of Twitter not being used as an aggregate for the most ignorant and cretinous of people to spread their thoughts, small-minded though they maybe. Right? I draw your attention to an article on Jezebel, which chronicled a flurry of racist tweets from American high schoolers. Amongst the nuggets these future leaders of the free world have to offer...

"The movie 2012 first New York floods and there is a nigger in office also. See a coinensadince."

"Lets face is… Romney aint the best choice..But hes a hell of alot better than that sand monkey we call a president. #MITT"

Most of the Twitter accounts these insightful comments came from have since been shut down or deleted. Jezebel reached out to all the schools these students go to in order to get some kind of explanation as to their behaviour, and some actually offered a comment. Meanwhile, some of those students, their hand caught in the racist cookie jar, tried to pawn off their ignorance on the ancient internet boogie man, the hacker.
"Stop critisizing me for something i didnt say. I was hacked Obviously," said one kid after people got on him for saying, "If your voting for Obama just because hes black and you are too, thats some nigger shit."
If the racism weren't so appalling, we might get into the shocking lack of basic spelling and grammatical skills of American high schoolers. And while free speech is a right, and the ultimate test of free speech is being able to accept that people can espouse the most puerile and hateful things, one wonders where America's impressionable youth gets the idea that hate speech on social media is okay as long as it's in a political context?
Posted by Adam A. Donaldson at 9:54 AM