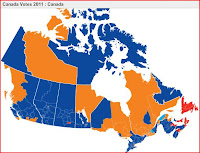 They seemed to happen under the radar, and given the results that may make perfect sense now, but with three by-elections come and gone in Calgary-Centre, Durham and Victoria, the make-up of Parliament remains exactly the same.
The closest riding in contention to our area was Durham, former seat of embattled, and resigned cabinet minister Bev Oda. But it seems whatever lingering odour Oda left on the her vacant seat had little sway on her constituents who sent to Ottawa in her place businessman Erin O'Toole, the Conservative candidate. O'Toole secured nearly 51 per cent of the vote, which was almost twice as much of the vote share that his nearest competitor, NDP Larry O'Connor, received. Liberal Grant Humes got third place with 17.3 per cent, followed by Green Party candidate Virginia Ervin with 4.1. Christian Heritage's Andrew Moriarity, and Online Party's Michael Nicula rounded out the ballot.
Now on the one hand, these results are surprising given Oda's status as a national embarrassment, and if that sounds harsh think of all the Conservative MPs that have gotten into trouble only to have the party rally around them; Oda had to quit. But on the other hand, one of my new work colleagues, who is from Durham, says that the area is dyed in the wool Conservative, and in an interesting bit of trivia, Durham PC MPP John O'Toole is Erin O'Toole's father. So it seems it's a family dynasty in Durham Region. The most surprising aspect is NDP O'Connor's second place finish. He earned five per cent more of the vote over 2011 NDP candidate Tammy Schoep, while O'Toole lost five per cent of the vote over Oda's performance in 2011. Meanwhile, Humes numbers remained almost even between 2011 and 2012, meaning either the Liberals have no traction in Durham, or the party needs to look at another candidate.
All the way across the the country on the west coast, Murray Rankin kept Victoria in the orange for the NDP, replacing for NDP MP Denise Savoie, and winning handily with 37.2 per cent of the vote. Interestingly, second place went to Green Party candidate Donald Galloway with 34 per cent of the vote, which is an impressive jump over 2011 results when Jared Giesbrecht won 12 per cent of the vote and a fourth place finish. Conservative Dale Gann and Liberal Paul Summerville finished with 14 and 13 per cent of the vote respectively, the combined vote of which would have been equal to the number of votes for Rankin. Interestingly, 44 per cent of eligible voters came out to cast a ballot, which is not bad for a by-election.
The big one though was the election in Calgary-Centre, which was the focus of intense attention in the days leading up to Monday's vote due to Conservative candidate Joan Crockatt, who made some unstatesman-like comments and outright refused to show up to many debates and candidate forums. The seeming result was that Calgary-Centre, a Conservative/Reform stronghold since the riding's creation in 1968, became a three-way race. Former Calgary-Centre MP Lee Richardson won in 2011 with 57.68 per cent of the vote. A year-and-a-half later, Crockatt won 36.9 per cent of the vote, which was only 4.2 per cent more than her nearest competitor, Liberal Harvey Locke.
In another interesting development, Green Party nominee Chris Turner won 25.6 per cent of the vote for a third place finish, a 150 per cent increase over William Hamilton in 2011. Meanwhile, the NDP's Dan Meades finished a distant fourth with 3.8 per cent. All this seems like a seismic shift in western politics, but the numbers may be deceiving. Barely 30 per cent of eligible voters came out to vote in Calgary-Centre, which is about 26 per cent less than the number of voters who cast ballots in 2011. It could be argued that it came down to how well the campaigns got out their ground games and rallied their voters. However, I would say that these results can't be dismissed. If anything, it might show the Liberals and the Greens, who got 17.5 and 10 per cent of the vote respectively in 2011, that Calgary is vulnerable, and perhaps the Conservative's whole western block is vulnerable. Or let's put it this way: the 2012 vote for the Liberals and Greens together equaled the percentage of the vote won by Richardson in 2011.
So in the first test of the majority Tories, it appears that they're staying strong, but there are signs of cracks in the facade. It's a little less than three years to the next federal election, and if I were a Conservative strategist, I might start sweating, if only a little. And if I were a political operative on the left of the spectrum, I might start seriously thinking twice (or thrice) about a merger, or some kind of co-operative effort.
Posted by Adam A. Donaldson at 3:30 AM