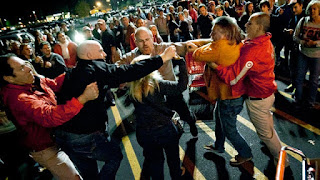 Traditionally, the term "Black Friday" means the point in the year that U.S. retailers start making profit, as in they go from being in the red, into the black. While I suppose technically that's what Black Friday still means, for thousands who work in the retail sector it means dealing with the type of scene one usually needs police or military training to handle. That's part of the reason why thousands of Wal-Mart workers across America are held a walkout in their stores today, thus avoiding all potential stampedes, shootings, and chemical attacks that now seem to accompany, what should be, a pleasant day of shopping.
Concerns were already being raised in the midst of the madness last year, not just because of the escalating violence, which will undoubtedly see some Best Buy in Toledo get nuked in 2015 as people riot over $100 X-Boxes, but because of the instance of these stores having to open at 5, 4, even 3 am on what's supposed to be a holiday weekend. The trend has gotten even worse this year, with stores opening at midnight, meaning employees have to report to work on what's supposed to be a national holiday.
Now one can certainly make an argument that people who work in retail choose that life, and thus they lose the right to complain, but working at a big box store isn't the same as, say, joining the army. And no one as a kid says that they want to be a greeter, or move skids around in a stock room, when they grow up. But even if they did, are they not entitled to the same time off? Even Scrooge gave Cratchet the day off and that's before the ghosts fixed him.
Part of the problem stems from the growing commercialization of society, and it's not even just about having things anymore, it's about having the right things; the right brands, the right size, and the right price, even if, heaven forbid, you don't even need a thing. I'm always seeing these dollar sales at the local discount grocery stores, and people rush out because the stuff advertised is a dollar, or two dollars. The reality is that these items offer no real savings because they're in smaller packaging, which means that you're paying less money for less product, which makes sense, but why do people line-up for these bargains? Because of the mirage-like luster that you're getting away with something, even if you're not.
In my advancing years, I've decided that my time is more valuable than money. There are a million and one ways to make money in this world, but time is a precious commodity that you can't replenish. I get in line behind people all the time at the store who think that a computer accidentally over-charging them a couple of cents is the crime of the century. I've often thought about going up to them and covering the overage out of my own pocket so that the line can keep moving rather than waiting on some hapless clerk as he tries to find the one sticker out of ten thousand that has the price they want on it.
An extension of this, and I've wondered this for a while, is how people manage to justify making the five hour round trip to the nearest border crossing in order to partake in Black Friday "savings" in the States. Doesn't the cost of fuel, renege any money you saved on all the stuff you bought? And what about duty? It boggles my mind that we have a population that bemoans to a severe degree the price of gas, but don't think twice about squandering all that gas to save a couple of bucks on another TV you could have gotten 10 minutes down the road for a little bit more money.
So naturally, the talk has turned to taking out the middle man and bringing Black Friday to Canada. And with it, if reports from today's Black Friday are to be believed, include:
Wait, there's more:


I could probably spend all day looking up incidents similar to these, but I trust the point is made. And while I'm sure that many people were able to shop in relative peace (or at least shop without the threat of violence), there's a definite trend here. But what slays me most of all was this article I found from CBS News in Beaver Falls, PA. The reporter talked to people waiting outside stores, waiting to engage in the new 21st century game of shop till you drop - the one where the drop may come from you getting pepper sprayed, or tread upon, or avoiding a bullet - only to discover that they would rather be somewhere else, and are more or less only at a store at 3 in the morning on a holiday because other people are. It gives you a lot of hope for the future that people are easily driven by the age old, "If your neighbour jumped off a bridge..." argument.
But still, it seems to be coming here, and worse still, we want it to. Canadian media was almost gleeful today recounting the glories of bargain hunting, practically deifying the ones who get up before sunrise to spend money in the name of a mass delusion that love for others can only be quantified by how much you spend on them. Which is why it seems that stores must now be open constantly, we just don't know what to do with ourselves unless the mall is open, and to bring this full circle, the ones who are paying the price for that are the retail workers themselves.
So given the escalating violence of "Black Friday," which if it occurred in any other country would spur discussions of UN intervention, why must we continue to endure it? This isn't an anti-consumerist rant, but a call for consideration. Is this desire, this madness for things, making us better? And in the process, it's the poor people that work on the ground floor of these businesses that bear the brunt.
You may think that they chose to be there, but chances are, if my own experience in retail is any indication, they were "voluntold" to be there, on a holiday, in the wee small hours. But to paraphrase the line, "if you didn't come, they wouldn't build it," and if the protests at Wal-Mart's yesterday are any indication is seems that those that want no part of Black Friday, the ones paid to be there, have had enough. This Thanksgiving weekend, perhaps the most thankful should be the ones that have a choice and choose to keep the holiday in the family spirit, rather than the retail.
Posted by Adam A. Donaldson at 6:29 PM