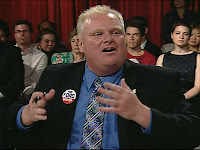 It seems it was the worst case scenario for Toronto Mayor Rob Ford as a court has decided that he was guilty of conflict of interest charges, and, as consequence, will be removed from office.
"I find that the respondent has failed in his burden to show that his contraventions of the MCIA were the result of a good faith error in judgment," Ontario Superior Court Judge Charles Hackland wrote in his decision. As a result, Ford will step down as Mayor of Toronto in 14 days, "recognizing that this decision will necessitate administrative changes in the City of Toronto."
The charges stem from an accusation that Ford had violated Municipal Conflict of Interest Act when he voted in council on a motion demanding he return $3,000 he fundraised for his youth football charity using city hall letterhead. Ford voted against the motion when, in the judge's interpretation of the act, should have recused himself or abstained. As consequence, Ford loses the Mayor's chair a little over halfway through his term.
Ford has 14 days to appeal, but if that should fail then Deputy Mayor Doug Holyday will assume the Mayor's duties. What happens after that, no one is sure. An election could be called, and if it is Ford will be allowed to run again. The judge could have ruled that Ford was bared from running again for seven years, but Hackland stayed his hand.
As for the broader implications, there will be some question about the precedent this is setting. I, myself, am uncomfortable with the idea that someone can be removed from office by court order, and that should be disturbing to any fan of democracy, regardless of how you feel about that person's politics. When someone is democratically elected, short of murder or something equally insidious, shouldn't they have the right to govern, as they see fit, according to the rules of said government.
Not to say that conflict of interest isn't a serious charge, but this was not an action brought by the police or council, but a private citizen suing to have a politician he publicly disagreed with removed from office. It's an abuse of the system and it opens the system up to further abuse. How long will it be before other elected politicians might face a similar lawsuit from someone with an axe to grind? Not to say Ford was in the right, but if a judge fires the Mayor of Toronto, I want it to be for more than $3,000. Ford had better have been a super-criminal so dynamic that Batman himself had to stop him, and although the comparison between Ford and the Penguin is striking, this is not the case here.
Posted by Adam A. Donaldson at 12:30 PM

Each and every resident must stand vigilant so that we don't fall into a facist state. Also, you may disagree that he be fired for $3,000, but a wrong is a wrong and when we start excusing little indiscretions we are opening the floodgates.

The judge didn't remove Ford from office. The Municipal Conflict of Interest Act made removal from office the mandatory minimum sentence. The judge just determined (correctly) that Ford had violated the act.
As for the original transgression over soliciting charity donations from lobbyists using city letterhead: that's called influence peddling, whether the money went in Ford's pockets or not. It's a serious charge and has no place in a functional democratic institution.
The best case scenario to preserve the will of the people is a by-election. Without Rob Ford's name on the ballot.