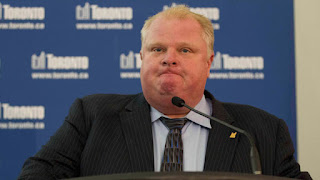 Tuesday's loss of the Metro Bowl by his beloved Don Bosco Eagles probably did nothing to help Mayor Rob Ford's mood. In a week when where he was basically fired, and as consequence lost in a legal fog of what happens in the meantime between appeals, stays, by-elections, appointments and other jargon, the man could have used a reason to perk up. But sadly, like a full term for his mayoralty, it was not meant to be.
Now like a lot of things in life, the fate of Ford is not nearly so cut and dry. As I pointed out in my previous post on the subject, or at least as I tried to point out, there are some complications. Some mixed feelings if you will. The tenor of the comments (two of them, so far) I received on that post seemed to think that I didn't get the implications, or that I didn't accept the seriousness of the premise of Ford's removal from office. I'll chalk it up to my trying to write something on the fly, as the details of an incredibly complex and unprecedented story was coming in. But the fact of the matter is that I do get the seriousness, I do get the implications, and I understand why the punishment both may and may not fit the crime in this instance.
This maybe one of those occasions where, I think, people accepting the idea that you might have to hold two different ideas in your head at the same time. Yes, Ford was in the wrong, and deserved to be punished in accordance with the Municipal Conflict of Interest Act, but at the same time this case didn't come up through the Criminal Justice system, but was brought to the court by a private citizen with an axe to grind against the mayor, being represented by a private lawyer who also had an axe to grind against the mayor.
Now, was Ford in the wrong? Absolutely. Was the MCOI followed to the letter by Ontario Superior Court Judge Charles Hackland? Yes. So Ford is justifiably and lawfully to be removed from office then? Of course. But how does that jibe with what I just said and what I said the other day?\
The truth is I guess it doesn't, it's just a feeling. And to be honest, Ford could have turned this (gravy?) train around at any time. He could have realized from the beginning that using his own city hall letterhead to raise funds from people who do business with the city might be a bad idea and perceived wrong, no matter how altruistically the funds would be used. He could have realized, having never read the MCOI Act, that voting on a motion about you was a bad idea. He could have read the Municipal Conflict of Interest Act. He could have gave the money back any one of the six times the integrity commissioner asked him to do it. And finally, he could have treated the matter with the seriousness it deserved. Even Justice Hackland said that his harsh treatment of Ford was driven, in part, by the mayor's dismissive attitude in court.
There's also the fact that this was the first, major case involving the MCOI to come before the court. Law is built on precedent, the cases before inform the cases of the future. And for the first at-bat of the MCOI Act, Hackford more or less had to observe the letter of the law no matter how people feel about the disproportionality of the infraction and the sentence. This time it was Ford voting on a motion making him return money he raised for charity, but tomorrow it could be a mayor or councillor getting kickbacks or cash under the table for preferential treatment at city hall. It could be fraud. Fraud that might lead to a loss of life or sizable punch to a municipality's coffers.
But understanding the legal and intellectual implications is one thing, for many there's still a visceral feeling that one person overturned the will of the many. The many wanted Ford to be mayor or Toronto, Paul Magder did not. Madger has gotten what he wanted, and there are certainly many in Toronto enjoying Ford's fate because of him, but what of the thousands that voted for Ford, the man and his agenda? Why does Madger know better than them?
Now I've never been one to pile on the conspiracy-esque notion of "the activist court," that kind of thinking stems from an ill-informed, misinterpretation of the checks and balances system of democracy, when the legislature drops the ball, we expect the courts to fall on the ball, pick it up, and get it where it needs to be. By that standard, I'm satisfied with this result for Ford. The court has held him to the high standard a high-ranking, high-profile government official should be held to, and on his own head be it if he didn't do the homework and even crack the cover of one of the rule books for his job. But what's do be done now?
The best way, I think, for Toronto city council to save face is to appoint Deputy Mayor Doug Holyday to finish Ford's term, and then open the election, the one that's going to take place in 2014, to all-comers, even Ford. If the people of Toronto forgive and forget, that's their business, and if they go another direction and elect someone of a different political stripe like, say, Adam Vaughan or Olivia Chow, then that's the way the ball bounces. The chances of Ford keeping his job through appeal is highly unlikely as higher courts rarely like to overturn the ruling of the lower court unless something is seriously and obviously out of sorts. Ford we hardly knew ye, but I think what we'll mainly remember is the laughter.
Posted by Adam A. Donaldson at 7:52 AM

Good post, Adam. He managed to achieve something that most of his detractors haven't -- run for public office and win. In fact, he ran and won the election for Mayor of Toronto, having gone up against some stiff competition AND having done it as a... known substance, let's say, to the constituents casting a ballot.

But in the end, if it was politically motivated -- and that is what really stinks here, I think it's apparent it was -- there's no getting around his misjudgement and the especially high expectations regarding one's conduct in a role such as that.

You both raise some interesting points. Why did a case like this need to be brought before the court by a private citizen? The law is clearly written, and Ford's action clearly violated it, so why did no enforcement body (like the RCMP in the case of London's mayor Fontana) step in and lay the charge? If you're looking for politically motivated actions you may find some in the answers to that question.

And yes, Craig, Ford was democratically elected which means a lot, but there are two basic qualifications to be Mayor: winning the election and following the rules while in office. Both are equally important and meeting the first doesn't give you the right to violate the second.