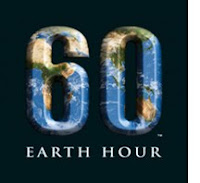 While I strongly support any activist action to combat global climate change, I have trouble with Earth Hour because if you can shut off non-essential lights for an hour one night a year, shouldn't you do that all year round? When it comes to these kinds of actions, it boils down to it being literally the very least you can do.
But they say it's the thought that counts, and this is a thought I can feel comfortable counting. Here's a press release promoting the 60km Community Relay for Earth Hour, which will take place on a week from Saturday on March 31st. All the details are below.
---

60km Community Relay Keeps Momentum for Cutting Electricity - Guelph Lights Out Relay asks for mass participation to remind everyone to switch off lights for Earth Hour
(Guelph, On) March 19, 2012 – Once again, Guelph Environmental Leadership (GEL) is encouraging Guelph residents to join over one billion people worldwide calling for action on climate change by switching off non-essential lights for Earth Hour at 8:30 p.m. on March 31, 2012.

In its second year, the GEL organized Guelph Lights Out Relay is gearing up for lower electricity consumption during Earth Hour. The relay, inspired by Guelph’s Community Energy Initiative and supported by the City of Guelph, Guelph Hydro, CJOY/Magic and others, was created to spur on participation on a massive scale. Last year Guelph residents nearly doubled their commitment to cutting electricity for the hour. This involvement was equivalent to taking 1,300 homes off the power grid. Relay organizers hope to double it again at the end of this month by prompting twice as many residents to support Earth Hour and keep the momentum building!
Between noon and 7:00 p.m. on March 31, local energy conservation advocates including city staff, community group members, university students, local business owners and fellow residents will be walking or running along sections of a 60 kilometre route through most of Guelph’s neighbourhoods to serve as a reminder that from 8:30-9:30 pm that evening, everyone should turn off their non-essential lights.
“Thanks to an unprecedented city-wide partnership, the goals of the Community Energy Initiative are within reach,” says Rob Kerr, Corporate Manager for Community Energy with the City of Guelph. “Residents will be taking the relay concept into the streets to magnify the need for neighbourhood collaboration to achieve our energy conservation goals.”
The relay is part of Green Impact Guelph (GIG); a community-based Community Energy Initiative-endorsed program to remove barriers and track progress on conservation that is now in its fifth year. “This relay is more than just a fun jog around the city to call attention to Earth Hour. It’s a symbol of the community’s commitment to reducing energy consumption in an effort to help curb climate change” says Sandy Manners, Director of Corporate Communications for Guelph Hydro. Behind the scenes, Guelph Hydro will be monitoring energy consumption and Tweeting provincial results as soon as they are known (@guelphhydro).
“Guelph’s commitment to Earth Hour clearly demonstrates our ability to take action,” states Glynis Logue, Executive Director of GEL. “But deeper conservation is required every day," says Logue. Communities are now being asked to move beyond the hour. GIG helps people reduce consumption in their homes whilst measuring community level achievements at the giga scale. Since 2009, GIG has helped residents remove barriers to conservation – accompanying residents every step of the way. And the work is making a difference. With GIG retrofits having been made since 2009, participating residents are now saving about $100,000 collectively on their utility bills every year.
In the week leading up to Earth Hour, 4,000 residents can expect to receive a door hanger asking them to get engaged. Results of the event will be highlighted by spatially mapping participation and comparing this and last year's electricity consumption during the 60-minute Earth Hour period to determine whether the awareness and relay continues to have an impact on behaviour.
The relay route will start in downtown Guelph in St. George’s Square, and end up downtown at Dublin Street United Church joining Transition Guelph at a candlelight celebration for Earth Hour. Guelph residents are invited to join this event as well.
If anyone is interested in running or walking a leg of the route or if you’re interested in helping out with relay organization, please call GEL at 519 763-2652 or email info@guelphgig.ca.
Every Guelph citizen is encouraged to register their support. To pledge support for Earth Hour, join the community relay and to see the relay route visit: www.guelphgig.ca.
Posted by Adam A. Donaldson at 6:08 PM