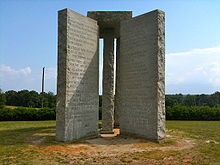 I was at the Toronto ComicCon a couple of weeks ago and was talking to the creator of the new webseries Guidestones.The series centres around a construct in Elbert County, Georgia, a man-made granite monument erected by an unknown person or group of people in 1980 that outlines 10 guidelines or principles meant to govern a new Age of Reason. The principles, which are written in several languages including English, Hindi, Arabic and Chinese, offer helpful hints for a healthy world, like "Maintain humanity under 500,000,000 in perpetual balance with nature," and "Balance personal rights with social duties."
Well this got me thinking, in the wake of the robocall controversy, and other election shenanigans following the 2011 federal vote, should we be looking at new set of Election Guidelines? Election Guidestones.
And I answer myself: Why not? I came up with 10 guidelines of my own based purely on my own perspective of the issues and matters of voting in this country. The hope was to not just prevent another controversy like the robocall scenario that tried to divert so many from their polling places last spring, but to get people to take the act of voting more seriously than many of us do now, and also to make campaigns and campaigners focus more on issues, and less on winning.

Now these are my own ideas, and they reflect my own biases. For instances, I do not believe at all in voting for our government via online forum or poll. I think it's a Pandora's Box and one need only look at the issues with electronic voting machines south of the border to understand why. There's also nothing in here, I think, that contradicts any future changes to government structure, like say, proportional representation. You may think I go too far, and you may think I don't go far enough, but I think one thing's for certain, if we don't do something to tighten the fairness and impartiality of our election, especially following the robocall debacle, then our democracy will become even more compromised.
So without further ado, here are my new Election Guidestones:
Posted by Adam A. Donaldson at 5:24 AM