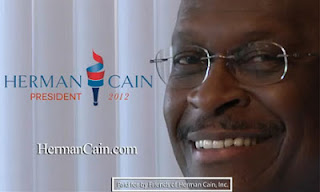 In the Republican primary race, no one goes gently into that good night. Take our old friend Herman Cain. The former CEO of Godfather's Pizza - not satisfied with proposing an utterly implausible but phonetically pleasing tax plan, able to offer literally nothing in the way of a point of view on major foreign affairs issues, willing to quote song lyrics from the soundtrack of the Pokemon movie after showing up late for his own concession speech - is keeping his name in the national conversation thanks to his ubiquitous Super PAC.
On The Colbert Report last night, host Stephen Cobert showed the new ad from Herman Cain's Super PAC, and it's either another misguided attempt on Cain's part to mix irreverence with his mission statement, or it is, as Colbert put it, a new medium. A hybrid of politics and art called the "Arttack Ad." Somehow, I doubt that Cain and his surrogates are capable of that kind of intentional self-parody. Check out the ad for yourself here:


And as a reminder, here were the last words on the campaign trail from this man, and the most telling clip from an ad he previously produced. Where he gets off attacking anyone through ridiculous analogies involving fish murder, I'll never know.