Never Mind the Smell, the Air is Fine 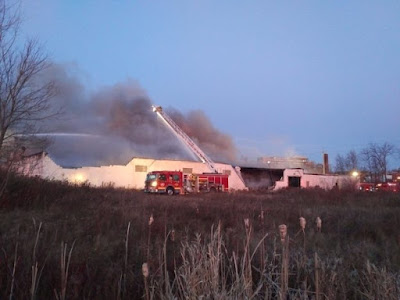 If you live in the south end of the city, and the air smells vaguely like "dill pickles and burnt plastic" (as one person on Facebook describe it), the good news is that you're in no danger. The bad news is you might have to live with aroma for a couple of days.


As reported by numerous outlets, fire crews in Cambridge responded to a report of heavy smoke at a vacant factory on Sheffield St in Hespeler on Monday afternoon. Eventually, five teams in total responded to the blaze, which ended up destroying the building, and although there were no injuries reported, there was a concern that toxic substances may have been stored on the abandoned site.
That concerned was heightened by an easily identifiable smell coming from the old foundry that then prompted businesses and homes in the immediate vicinity to be evacuated. Cambridge Fire Department acting platoon chief Al Young said that rumours of toxic substances being on site were, to his, knowledge, unfounded, but the smell was soon carried on swift winds to the Royal City.
"The Ontario Ministry of the Environment is on-site monitoring air quality, and people can resume outdoor activities unless they experience coughing or throat irritation," said a City of Guelph press release issued on the situation. "The Guelph Fire Department responded to several calls Monday evening and asked people to stay indoors to avoid the odours."
According to the City of Cambridge:

.@ONenvironment continues to monitor the air and water quality around the Hespeler fire. Pls be advised that the smell of the fire is likely to be noticeable for the next few days #cbridge #safety
— City of Cambridge (@cityofcambridge) November 21, 2017

The Ministry of the Environment and Climate Change has said that great pains have been undertaken to not just monitor air quality, but water quality as well. According to CTV News, "The Ministry of the Environment was also brought in to take air samples and ensure no contaminants entered the Speed River."
The site was a former Crowe foundry and it is believed that rubber and associated materials with the manufacturing of iron castings for water pumps and engines remained on-site. Interestingly, a July 2013 article in the Waterloo Region Record called the Crowe foundry in Hespeler an "eyesore" filled with "45-gallon drums of flammable, combustible and toxic liquids."
"This is a bit of a disaster waiting to happen," said now former-City Councillor Rick Cowsill. A city report agreed saying that because of the building's wood frame that a structural fire was "imminent", and that the conditions there wold make fighting the fire "life-threatening" for the crews that responded. In context, it seems the fact that no firefighters were injured responding to the fire Monday could be considered something of a miracle.
According to that Record article, the tally for reclaiming the site in back taxes and remediation would be almost $2 million. There's no word yet on the cost of the fire.
In the meantime, hold your nose.
Posted by Adam A. Donaldson at 1:02 PM