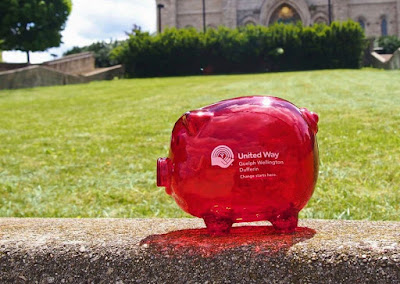 Now that Halloween is finally out of the way, we can focus on the holiday that really matters: Black Friday! Kidding aside, retailers across town are eager to begin the busy Christmas shopping period, but the holiday season is supposed to be about more than just spending, it's also supposed to be about giving. To that end, efforts are already underway at the United Way.
Now several weeks back, city council heard about this year's United Way campaign, and the ambitious goal of $60,000 they plan on reaching. Although that's a significant amount of money, this will constitute a fraction of what the United Way of Guelph, Wellington and Dufferin hopes to raise this year. To put it in perspective, the United Way raised $3.6 million locally in 2016, which assisted 88 programs at 54 different agency partners.
Who are these partners? They're a who's who of Guelph's leading social assistance and advocating agencies. Think HIV/AIDS Resources and Community Health, Family and Children Services, Guelph-Wellington Women in Crisis, Hospice Wellington, and the Guelph and Wellington Task Force for the Elimination of Poverty. That's just five, and if you consider the work of these agencies and the 49 others, that's thousands of people across our region that are touched every year by a donation to the United Way.
That begged a question, and it was one of those questions that sometimes leads to a podcast, how many people out there know how the United Way works? How do these individual campaigns come together, and what happens to the money raised? How does the United Way decide where to spend those donations? What's the process? Good questions, right? I decided to ask them of Emma Rogers, campaign manager of the local branch of the United Way on this week's show.
So let us learn more about one of the preeminent names in charity, and just in time to help raise awareness of this year's campaign, on this new episode of the Guelph Politicast.


To learn more about the United Way, who it helps, and how you can get involved, you can visit their website here.
Programming Note: Guelph Politicast will start an every two-weeks schedule starting next week. A new episode of the show will be posted on Wednesday November 15.
The theme music for the Guelph Politicast is from the KPM Klassics collection by Syd Dale.
The host for the Guelph Politicast is Podbean. Find more episodes of the Politicast here.
Remember that the Politicast Podbean channel is also the host for podcast versions of Open Sources Guelph. The previous Thursday's episode of Open Sources will be posted on Mondays.
Posted by Adam A. Donaldson at 9:00 AM