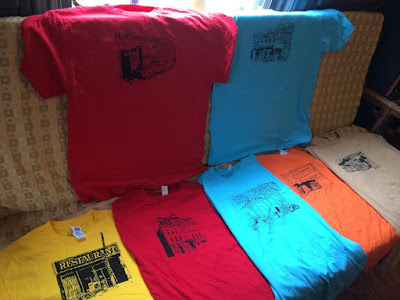 "Gone Guelph." The very name sounds almost self-defeating. But what began as a kind of memorial to beloved Royal City institutions that are no longer with us, has become a one of a kind collectable that's brought joy to more than a few Guelphites over the last year. Gone Guelph t-shirts are the toast of the town, and Jenny Mitchell is back, just in time for Christmas, with this year's new line-up.


It's often true that simple ideas become wildly popular, but when Jenny Mitchell first had the idea of putting artistic renderings of old store fronts on silk-screened t-shirts she made herself, it didn't exactly take off. A few months later though, in fact about this time last year, people started hearing about her apparel tributes to Macondo Books, the Trasheteria, and others (including her father's own Family Thrift Store), and they began selling like proverbial hot cakes.
One year later, Mitchell is back with an all-new line-up of shirts including the Arena, the Guelph Mercury, Cafe Aquarius, and the Boxed Meat Revolution. She's even got a shirt that's not a gone business, but a gone mural; an ode to the "Vote for Nobody" piece that was once on the side of what's now the Making Box, which was reproduced with the permission of the original anonymous artist. Mitchell, an artist and musician by trade, has made nostalgia haute couture in Guelph.
So for this edition of the podcast, we get into the wayback machine with Mitchell and talk about her inspiration for the shirts and their surprising success. We talk about her artistic process in creating each design, and how Mitchell isn't always necessarily going for photo realism when she interprets old photos onto the t-shirts, and we also talk about the process in choose those images and the sometimes slim pickings in trying to find an image. On top of the mechanics, we also talk about the limits of nostalgia, and maybe if we're remembering the past with rose-coloured glasses.
So let's get a cup of coffee from Apollo 11, or some fried rice from Sun Sun's, or take a seat at the Carden Street Cafe, and listen to this week's Guelph Politicast.

You can see all the shirts and order them from the Gone Guelph Facebook page here. There's an early bird special on now if you order before November 25, and, need we say it, they make a great Christmas (or non-denominational December holiday) gift.
The theme music for the Guelph Politicast is from the KPM Klassics collection by Syd Dale.
The host for the Guelph Politicast is Podbean. Find more episodes of the Politicast here.
Remember that the Politicast Podbean channel is also the host for podcast versions of Open Sources Guelph. The previous Thursday's episode of Open Sources will be posted on Mondays.
Posted by Adam A. Donaldson at 9:00 AM