Metrolinx Building New Bus Storage in Kitchener, But What Else? 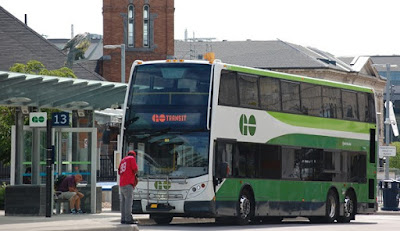 Today Metrolinx and the Ontario government announced that it was building a new bus storage and maintenance facility to "improve transit service for commuters in the Kitchener-Waterloo region, and help meet current and future growth." The new space will house 20 single and double-decker GO buses, and will replace the current leased bus storage space in K-W, but you know what we could really use in the area? More bus service to and from Guelph.


Now that's not to denigrate Metrolinx, GO, or the Ontario government. Certainly they should be commended for the expansions made in train and bus service, even to lonely old Guelph here, but there's so much more that needs to be done beyond creating future housing for future buses (and yes, there's an understandable need to have someplace the permanent to park the buses at night, so it's still a practical move).
As Toronto politico Sean Marshall pointed out in a blog post in 2015, there are huge gaps in the service area across the province, areas that were once covered by companies like Greyhound and Canada Coach Lines who have long since abandoned those posts. Primary among Marshall's examples was the lack of transit between Guelph and Hamilton. If you want to get to Hamilton from Guelph, it's a two-and-a-half hour ride that requires a detour through Square One in Mississauga. For the record, Hamilton is a 45-minute drive away.
Things pick up for you if you want to travel between Hamilton and Kitchener, there are a couple of Mega Buses going back and forth through the day apparently, but the triangle between Guelph, K-W, and Hamilton covers an area that includes a million people, which is a lot of people for a couple of buses per day. That million people maybe small potatoes when compared to the GTA and its 6 million plus people, but it's also true that the further east you go, the more your transit options increase beyond GO and Greyhound; there's a lot of crossover in that territory with some of those municipal and regional transit services.
So let's talk about what we'd like to see from GO Transit. If the intention to build a new bus storage bay is the future expansion of service, let us consider how we'd like to see service expand. How about an express bus between Guelph and Union Station, so thus avoiding a three-hour tour through Brampton and Mississauga and all destinations in between? That may be the wishful thinking part of this, but there are more immediate things that can be done closer to home.
For instance, did you know that there's no public transit connection between Guelph and Cambridge? Cambridge is 20 minutes down Wellington Street once you get to the other side of Hanlon, but unless you have a car the only way to get there is by bike or taxi. How about a connection on the GO to Kitchener or Waterloo that doesn't go through Aberfoyle first? The truth is this kind of service expansion might be better served by some kind partnership between Guelph Transit and Grand River Transit, but no one ever talks about that unless there's a local election going on.
So yes, speaking for transit nerds, this is great news that Metrolinx is investing in its transit infrastructure in our region, but we need to put as much thought in to the present as we do about the future.
Posted by Adam A. Donaldson at 9:45 PM