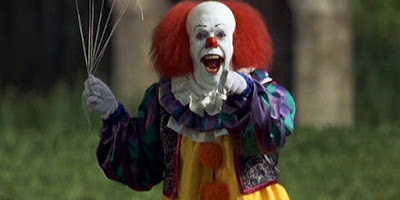 From Texas, to Philadelphia to New England to Western New York, the creepy clown phenomenon is a thing, and it seems to be spreading, even to the campus of the University of Guelph.
A U of G student named Alexis Kirkimtzis-McConnell posted this to Facebook last night. It's hard to see because of the reflection in the window, it looks like someone in a clown costume walking down Winegard Walk past the McLaughlin Library where this was filmed. Kirkimtzis-McConnell was apparently so startled by the appearance of the sinister-looking carnie as she walked to her car, she ducked into the library, and then she was accompanied by some contentious students to the parking lot in case the clown returned.

The media relations officer for Guelph Police, Cst. Mike Gatto, says they they've received no complaints about creepy clowns about in Guelph, so there's that at least.
For the most part, it seems as if these incidents are being perpetrated by teens and young people in their 20s. Two teens in Toronto yesterday were arrested for filming a video where they chased an unsuspecting student while in clown regalia, then, in Nova Scotia, someone posted on Instagram a warning to Halifax that local clowns would be "just creeping" in the area. Meanwhile, in New Haven, Conn, the public school board there has banned clown costumes for Halloween as "symbols of terror."
The phenomenon seems rooted in a mix of a couple of things: the fleeting notoriety of social media and genuinely disturbed people looking to rattle the calm in others. Perhaps there's only one solution to the anxiety...