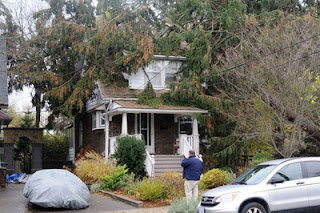 It seems that Guelph weathered (pun intended) the "Frankenstorm" Sandy with relative calm as compared to places like New Jersey and New York City, but he did take a couple of hits.
The City released an information bulletin this afternoon outlining the damaged caused by Sandy in the Royal City. It's pretty superficial on the surface, but obviously there are some people in town who woke up this morning rather seriously affected.
As for me, I managed to ride out the worst at work. At least I know what caused that the momentary flutter in the lights around 10 pm now. A little knowledge is a good thing.
Here's the bulletin from the city:
GUELPH, ON, October 30, 2012 – This morning Environment Canada cancelled the wind alert for Guelph. Hurricane Sandy was downgraded to post-tropical storm status before reaching the area last night. The storm was less severe than expected, but did cause some property damage.
Between 8 p.m. and 1 a.m. high winds took down six trees—two of which fell on power lines causing minor outages, and another fell on Gordon Street near Clair Road. Two privately owned trees fell on houses, and one fell on a car in a private parking lot.
No flooding was reported during last night’s storm Guelph’s storm drains are working well. City crews also cleaned up bags of trash that blew away from where they were placed for collection last night.
“We’re grateful we didn’t see more damage and I want to thank City staff, Guelph Hydro crews, Guelph Police, Fire and Emergency Medical Services for working so hard to be prepared,” said Harry Dunning, manager of administration and emergency preparedness.
The City asks residents to help prevent flooding by keeping leaves and debris out of roads, gutters and drains until loose leaf collection starts on November 12. Residents are also encouraged to avoid road construction sites with gravel road surfaces including Speedvale Avenue from Stevenson Street to Victoria Road (follow the detour); Victoria Road from MacAlister Boulevard to Arkell Road; and Alice Street.
To report a flood or fallen tree branches on public property call 519-837-5628.
More information is available at guelph.ca/emergency or by calling 519-822-1260.
Posted by Adam A. Donaldson at 5:18 PM