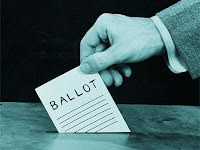 The first big test to the longevity of the Conservative majority will take place late next month with the announcement of three by-elections in three different ridings across Canada. Prime Minister Stephen Harper made the announcement today that the ridings of Victoria (British Columbia), Calgary-Centre and Durham (Ontario) will be going to the polls on Monday November 26.
But Harper won't be the only one tested on November 26, it will also be Thomas Mulcair's first election as NDP/Opposition leader. The question before us today is can Mulcair capitalize on the NDP wave started in 2011, or is the prospect of Trudeau-Mania just too good to refuse? Or maybe Harper's luck will hold, and he'll take all three seats. But how likely is that?
The big question will be Durham, former home base of the infamous hotel room smoking, $16 orange juice charging former cabinet minister Bev Oda. The question is will the toxic politics of Oda's spending spree will reflect badly on the Conservative that tries to replace her?
In Victoria, the question surrounds the toxic politics of the another party, in this case the provincial Liberals. And if any province might serve as a beachhead for an NDP invasion of English Canada it will probably be British Columbia. I think of the three ridings in question, Victoria may be the easy, perhaps solitary, orange win in this cycle.
As for Calgary-Centre, it's in the most Conservative city of the most Conservative province in the country. It would be something more akin to a seismic shock on a cataclysmic scale if it should turn out that the Harper Conservatives can't secure a win here. And, more importantly, a very troubling sign for the current governing party.
I guess we'll see what happens on November 26.
Posted by Adam A. Donaldson at 11:00 PM