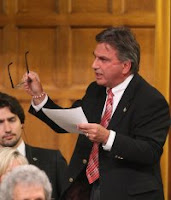 In the midst of the robocall scandal, Conservatives tried to pivot to the real villain: Liberal MP Frank Valeriote.
During the 2011 Federal Election, Valeriote's campaign produced a robocall with someone clamming to be an ordinary citizen informing the voters of Conservative candidate Marty Burke's stand on abortion and trying to get the pro-choice vote out against him on Election Day. The problem was that the call was never identified as being from the Valeriote campaign, and thus came to the Canadian Radio-television and Telecommunications Commission for violation of telemarketing rules (and yes, there apparently are some).
“The violations involved a pre-recorded message sent by the association that failed to identify on whose behalf the call was made; provide necessary call-back information; and display the originating telephone number or an alternate number where the originator could be reached,” the CRTC said in its ruling today.
The result is that the Valeriote campaign has to pay a $4,900 fine. In response, Valeriote's office released this statement earlier today:
“I accept the findings of the CRTC regarding the election call placed by my campaign designed to educate Guelph voters about specific policy differences between myself and an opponent. We were unaware of certain requirements and inadvertently neglected to include some identifying features in the message, such as a phone number and address. When I first learned of the errors in the call earlier this year, I was fully and immediately cooperative with the CRTC; I take full responsibility and apologize for the infringement.
This has been an important learning experience, not just for me, but for all MPs and future candidates. Consequently, I have volunteered to do whatever I can to assist the CRTC to educate MPs, candidates and their staff to the full extent of regulations governing calls and the use of auto-dialers. It is important for these types of investigations to take place regularly to ensure that Canadians are aware of our rules and that they are respected.”
Now I know there are many amongst the local Conservatives here who want to look at this as a turnabout is fair play situation. Burke and his staff, having been dogged with allegations and conspiracy theories for months now, get to dine out on Valeriote and his team having now caught the wrath of the powers that be for their electoral indiscretion. But there's a couple of things: first, it will surely give my Gang of 4 colleague Oliver Rockside more reason to call for the elimination of robocalls from campaign, but I'll let him go to town on that. Two, to compare what Valeriote did and what the perpetrators of the Election Day robocalls did is to compare apples with A-bombs; after all, Burke was pro-life and made no secret of it. And third, Valeriote's been open about the error, acknowledged it as his fault and is making amends.
I hope one day that the person or persons behind "Pierre Poutine" will do the same.
Posted by Adam A. Donaldson at 3:27 PM