The Blind Leading the Blind? 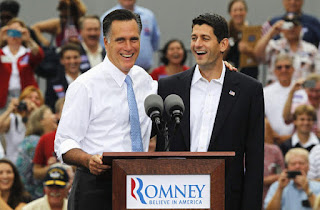 It was announced late last night that former Governor Mitt Romney had selected Congressman Paul Ryan of Wisconsin to be his running mate in this year's U.S. Presidential election on the Republican ticket. It's a move that's seen as both strategic and complementary. Ryan, a darling of the Tea Party and widely seen as one of the intellectuals of the current right, bolsters Romney's conservative credentials while Ryan seems to be one of the few people that Romney's been comfortable campaigning with. In other words, he humanizes Romney, a factor that the embattled former Massachusetts Governor desperately needs.
As for the optics, let's just say that the selection of Ryan has just as many potential pratfalls for Romney as it does potential benefits. Ryan has authored two alternative budgets, both of which heavily cut spending, and cut taxes - from the shaving of 10 per cent off the top marginal tax rate to the elimination of taxes on capital gains and stock dividends. He also wants to privatize social security and medicare, and stop medicare from going to anyone born after 1975 and instead give them vouchers. These points are fodder for Democrats who want to paint Romney and Ryan as out of touch, ready and willing to support the wealthy at the expense of those in need of help: the poor and the ill. Even the United States Conference of Catholic Bishops sent an open letter to Ryan criticizing his 2012 budget plan on those grounds. Not good if you're a practicing Catholic.
On the other side of the spectrum though, Ryan's fiscal hardline takes a hit when you consider that he threw his congressional weight behind both the bank bailout and President George W. Bush's medicare expansion. Ryan is also on the record as saying that he's not in favour of Romney's healthcare reform law, the Massachusetts legislation that was by in large the basis for Obamacare. Romney's had a tough enough battle trying to separate himself from his own law without a running mate who's been vocal in his opposition to it. There's also the fact that there's no proof to say that the VP pick sways votes one way or the other. A running mate can energize a base (see: Sarah Palin), and make a partisan feel better about supporting their candidate, but it's not going to get you the win.
The immediate benefit for Romney though is that he gets to change the news cycle from one in which he was getting pounded over gaffs and taxes, to one that is more celebratory - at least in the short term. Time will tell though if Ryan will bring good fortune or more bad fortune to the Romney campaign.
Posted by Adam A. Donaldson at 11:06 AM