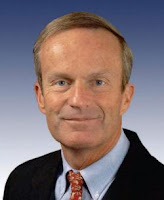 It's a curious thing how Americans can be so easily divided when so many people in one of their two main political parties continue doing and saying things that should put even the most loyal, but still sound-minded supporters on their heels.
Take Rep. Todd Akin, now candidate for the U.S. Senate, for example. Yesterday, he made a gaff so embarrassing, so misinformed, so misguided, that he might as well have said that he believes that leprechauns are real and that on the weekend he chases rainbows to find the pot of gold at the end. Of course, if Akin did actually do that, it's his own affair; no more a looney a pass time as collecting stamps or Star Wars memorabilia. But Akin's ignorant comments have real implications, and dangerous ones at that.
The topic at hand is whether abortion should be allowed in the case of rape:

From what I understand from doctors, that’s really rare. If it’s a legitimate rape, the female body has ways to try to shut that whole thing down. But let’s assume that maybe that didn’t work or something. I think there should be some punishment. But the punishment ought to be of the rapist, and not attacking the child.

And just like that, Akin not only managed to suggest there was such a thing as a "legitimate rape," but he's of the opinion that a woman's reproductive system can tell the difference between sperm inseminated in an act of consensual sex, and sperm from a rapist - excuse me - legitimate rapist. It would easily be the most ignorant thing a conservative said about female biology this year, but it might be a tie between Akin and Rick Santorum backer (and Batman villain) Foster Friess who said, "Back in my days they'd use Bayer aspirin for contraceptions. [...] The gals put it between their knees and it wasn't that costly."
What was costly for Friess, his boy Santorum and many members of the Republican Party was the bloating of the perception that they're prosecuting a war on women. Akin's latest words about "legitimate rape," with the fine oratorical turn by Friess and Rush Limbaugh's assertion that law student Sandra Fluke's desire for affordable birth control made her a "slut," form a trifecta of ignorance which should make any woman, and any man with reasonable perception, think twice about casting a vote for any social conservative. But the situation is worse than initial thought.
It comes down to Paul Ryan, the new golden boy of the GOP and the charismatic half of the Mitt Romney Presidential ticket. Ryan just one year ago co-sponsored a bill severely restricting Federal funding for abortion procedures to being performed sorely in the interest of the health of the mother. The bill also contained language referring to "forcible rape," as being a potential exception to the no-abortions-ever stand by both Ryan and Akin. Aside from their problems with women, already a demo not easily courted by the Romney campaign, the Akin conundrum shows a pretty big crack in the Republican ticket; a wedge issue divide between Romney and Ryan just in time to poke holes in party unity going into their convention in Tampa next week.
For the candidates, I might suggest a cool, refreshing swim while in Tampa, but swimming has also become something of a sore spot of Republicans. Well, skinny dipping anyway. Well... Skinny dipping in sacred bodies of water.
Rep. Kevin Yoder of Kansas, one of a freshman class of congressmen voted in 2010, has had to apologize to his constituents for taking a dip in the Sea of Galilee last summer in his birthday suit while on a trip to Israel. Sure it was night, and apparently no one was around, but as a pious Republican from the Heartland, he really should have known better than to jump bare naked into the same water Jesus Christ once walked on.
“I feel incredibly remorseful that I have caused embarrassment to my constituents and I have caused folks who believe in me to be disappointed,” Yoder told The Kansas City Star on the weekend. “The gravity of the situation and the actions I’ve taken are not lost on me, and I feel certainly regret at what has occurred, and I just want to apologize to my constituents for a momentary lapse in judgment.”
In Yoder's defense, swimming is allowed in the Sea of Galilee, but in keeping with the Christian tradition of the shame of nudity, skinny dipping there is a strict no-no. And to add insult to injury, this was an official trip organized by the American Israel Education Foundation, a charity whose mission is to provide grants for educational programs and conferences and to educate politicians and influential people about the importance of the U.S.-Israel relationship (as if this is the worst kept secret in international relations).
Now personally, I could give a rat's -ahem- anyway, about Yoder taking a quick (naked) dip in the Galilee, I'm not so religious you see. But one would think that as one of the new wave of ultra Christians, Yoder might stop and say to himself somewhere between unbuttoning his shirt and unzipping his pants if nudity and a Biblical landmark are a good mix. But who am I to judge?
Posted by Adam A. Donaldson at 11:11 PM