The police proudly completed a recent blitz of bicyclists over two days, August 14 and 16. They handed out 22 tickets and numerous warnings; tickets to people riding on the sidewalk and warnings to young people riding without helmets. Thank goodness the police are there to put the kibosh on this open rebellion of scofflawness, today kids are riding around without helmets, tomorrow they'll be joining gangs, selling drugs and packing heat.
So that's extreme. And while I would never advocate that kids ride helmetless, or that cyclists aren't supposed to follow the same rules of the road everyone else does, as a bike rider myself, I understand the root cause: the roads of Guelph are scary, and car drivers make it that way. Even side streets and bike lanes aren't necessarily oases, so I understand the compulsion to want to stay away from the traffic for the relative safety of the sidewalk. Again, I'm not saying that bike riders should be exempt from the rules of the road, but if I'm clipped by a cyclist then I'll probably just need a band aid, but if I'm hit by a car I'll need to go to the hospital. Or the funeral home.
But I was out riding my bike today, and a couple of things caught my eye. At the corner of Silvercreek and Woodlawn - already, arguably, one of the worst intersections in Guelph - a semi pulling two trailers tried to beat the red light and turn, and ended up blocking the entire crosswalk. A little further down Silvercreek, I saw a guy talking on his cell phone while driving. One would think recent news would make even the most ignorant driver think twice, but hey, it was just the law he was breaking.
Many were flabbergasted last week, when this picture made the rounds on Twitter: 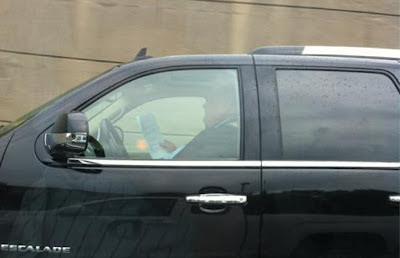 Now one would think that reading your speech as you drive 70 kilometers per hour on the Gardiner Expressway would be a chargeable distraction for the police, but the weird part is that the same Ontario law that's supposed to make it illegal to use your cell phone while driving, only extends to electronics. So you could read War and Peace on the 401 doing 120, and the most the police can do is give you a stern warning.
The bizarreness of the police patting themselves on the back for cracking down on people riding a bike is crazy to me. When you have so-called authority figures riding around in their luxury sports utility vehicle reading papers when his focus should have been on the road, and your dinging people for not having a bell on their bike, there's something wrong. Again, not to say that bicyclists are above the law, but cars are so much more dangerous when the people behind those wheels aren't paying attention. So the police can do all the crackdowns on cyclists they want, Lord knows many of them are reckless enough on their own, but the police need to also be strict with drivers too. I mean seriously, they're starting to think they can get away with anything. (See above.)
Posted by Adam A. Donaldson at 1:10 PM

Thanks for writing this! I totally agree; rather than penalizing people for riding on the sidewalk (because they probably don't feel safe on the road), we should work towards making the bike lane system safer.

A Student Who Cares said...

No I agree with the police, people riding bikes (under the law) should be on the road (with the exception of kids), although I do agree with Ben Baena, if the bike lanes were safer more people would use them.