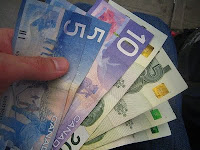 To all the naysayers who think that the city is going down a fiscal path to apocalyptic ruin, the powers that be in Guelph are apparently saying "hard cheese." The city's communications department released a press release today saying don't worry be happy, as Guelph has a "AA" credit rating and is looking good to get that upgraded to a "AAA."
The real question is why we got this news on a Friday afternoon, known in the business as, "taking out the trash day." Is there another shoe to drop, as in we're going to get some horrible economic news soon and the city doesn't want to seem misleading, but still want to soften blow? Or maybe they were just super-excited about the information, which would hardly be surprising considering the sky-is-falling attitude of the deficit hawks that post all the time on the Mercury website.
I'm more keen to think the latter, but I'd hardly be surprised by the former. It does seem like city hall is trying to feed us a storyline of above average economic growth that isn't really being felt on the ground at all.
So whatever the reason, here's the city's press release from today:
"AA" rating upgraded based on healthy local economy and manageable debt
GUELPH, ON, August 24, 2012 – Standard & Poor’s Ratings Services has reaffirmed Guelph’s current "AA" credit rating, and upgraded the City’s outlook from "stable" to “positive.”
“This Council has implemented several new financial policies," says Mayor Karen Farbridge. "Our improved credit rating shows they’re paying off."
Guelph’s low unemployment rate was a key factor in the rating improvement, along with the city’s diversified local economy.
Standard & Poor’s also noted the City’s continuing efforts to manage its debt by focusing on infrastructure renewal and replacement, reducing debt-financed projects, and deferring growth-related projects into future years. The City’s increasing liquid assets and reserves also influenced Standard & Poor’s outlook assessment.
"Guelph is growing and this research shows we’re financially prepared to manage that growth in a way that’s affordable and sustainable,” says Al Horsman Guelph’s Chief Financial Officer.
Posted by Adam A. Donaldson at 10:39 PM