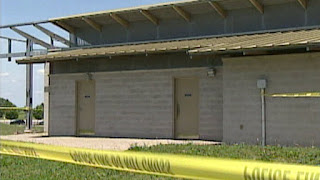 It's hard to believe that it was more than three years since the tragic events in a south end park that ended the life of Isabel Warren. The 14-year-old died in an accident when the wall of the washroom in South End Community Park collapsed, and the city is being brought to trial by the Ministry of Labour for failing to ensure the safety of the site. And the trial starts today.
Here's a press release from the city about the start of the trial:
GUELPH, ON, August 20, 2012 – Today the City goes to trial to address charges laid by the Ministry of Labour after a wall in the washroom in South End Community Park collapsed on June 16, 2009. The incident claimed the life of 14-year-old Isabel Warren.
“We hope resolving the issues in this case will help give our community a sense of closure,” says Scott Worsfold, Deputy City Solicitor. “The City again extends its sincere condolences to Ms. Warren’s family and friends.”
The Ministry of Labour and the City have prepared and submitted a Statement of Agreed Facts in the hope of reducing the length of the trial. The City will continue updating the community about court decisions in the case.
About the charges
Immediately following the incident the City fully co-operated with the Ontario Ministry of Labour (MOL) in its investigation. The MOL charged the City, as an employer, with failing to ensure that every part of the structure could resist all loads it was subject to under the Occupational Health and Safety Act.
The MOL also charged two contractors involved in the design and specifications of the facility. Grinham Architect and Argue Burnside Engineering were charged with providing negligent or incompetent advice. On April 20, 2012 the Provincial Offences Court dismissed these charges, and the MOL has filed a Notice of Appeal on the dismissal.
Posted by Adam A. Donaldson at 1:11 PM

Thumbs down to the City of Guelph, the judge, and anyone else involved in finding the City not responsible for her death. The city has their own 'building inspectors' to ensure that buildings are safe. Even if it was improperly designed, it should have been caught by our building standards in place by the CITY OF GUELPH. Shame on them.