Schreiner's Surprised That Question Period's Not Better on the Inside 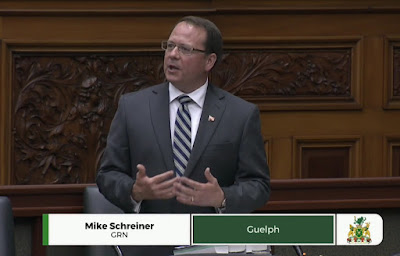 It seems that dreams don't come true in quite the way you think. After a rough month in the legislature where the new Ford government has cancelled cap and trade, ended green energy contracts, and generally thrown a monkey wrench into the best laid plans of Ontario's progressives, Guelph MPP Mike Schreiner rose in the legislature yesterday to smack everyone down for their partisan tendencies.


"The partisan heckling and political insults at Queen’s Park need to stop," Schreiner said. "We were elected to serve the people of Ontario, not to engage in the kind of shouting match I just witnessed between the Premier and the Leader of the Official Opposition this morning."
The usual Question Period rancor has been even more rancorous the past few days because of last Friday's decision by Premier Doug Ford to introduce legislation to cancel the election of four regional chairs and to reduce the size of Toronto city council by almost half. YouTube captured the trading of verbal blows for posterity.


"I was elected on a promise to do politics differently, to put serving people above political self-interest. Respect for the Legislature and for other elected members, even those who I disagree with on policy, is essential because it shows respect for the people who elected us," Schreiner explained.
"Unfortunately, the Progressive Conservative and NDP caucuses seem more interested in hurtling partisan insults and tearing each other down than in building Ontario up."
Schreiner encouraged both the Government and the Opposition to cool it with the rhetoric and focus on helping the people that elected them instead of finely crafting their zingers.
Of course, this isn't the first time a Guelph politician has taken exception to the level of decorum during Question Period. Back in 2010, then Liberal MP Frank Valeriote supported Wellington-Halton Hills MP Michael Chong in his endeavour to reform the rules of Question Period.
"We need to attack problems, not people," Valeriote said in the House at the time.
"In so doing it is hoped that Canadians will become reengaged in parliamentary affairs, and less cynical about our ability to be meaningfully engaged with one another, the result – discussions and policy that better serve Canadians and Canadians who are more deeply engaged in our democratic process."
Obviously, not much has changed at the federal level, but time will tell if our provincial representatives take Schreiner's message to heart.
Posted by Adam A. Donaldson at 9:00 AM