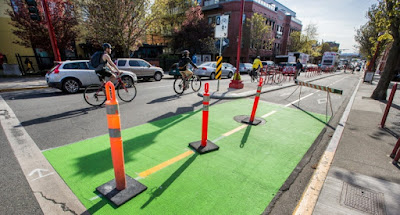 A few weeks ago, the new Ontario government cancelled $93 million of funding for something called the Ontario Municipal Commuter Cycling (OMCC) program. The money, which was raised from the cap and trade agreement, was for cycling infrastructure in towns and cities across the province, and the move is proof of just how hard it is to make cycling a priority for governments, but there is hope!


This week on the podcast, we're joined by Chris and Melissa Bruntlett, the authors of a new book called Building the Cycling City: The Dutch Blueprint for Urban Vitality. The book takes the reader to the Netherlands, and describes how that country has become, in their words, “an important model for moving the rest of the world toward a more human-scale, bike-friendly future.” It also goes to other places around the world, and across North America, to talk about how those lessons from the Dutch are transferable.
The Bruntlett's themselves walk the walk; they advocate for a "car-lite lifestyle", and live that lifestyle themselves in their home in Vancouver. The book is their latest project to promote multi-modal transportation infrastructure, which is a way of saying every form of transportation but the private automobile: walking, biking, transit, and car sharing included. Can Canada make the jump?
Well, the Bruntletts think so, and Building the Cycling City will show us the way. Before the book comes out though, the Bruntletts this week will talk to you about their own car-lite story, what they wanted to say in the book, and what cycling is like for people in the Netherlands who’ve never been. They also talk about the politics of developing the multi-model city, and what a bike utopia might look like if we follow in the Dutch example.
So let's go Dutch and dream about a better biking future on this week's Guelph Politicast!


Building the Cycling City: The Dutch Blueprint for Urban Vitality will be available in bookstores on August 28, but you can pre-order it now on Island Press, as well as Amazon, Barnes & Noble, or Indigo Books. The book tour rolls through Guelph on August 27 at the eBar hosted by the Guelph Coalition for Active Transportation, and you can find details here. You can also visit the Bruntlett's website ModaCity here.
The theme music for the Guelph Politicast is from the KPM Klassics collection by Syd Dale.
The host for the Guelph Politicast is Podbean. Find more episodes of the Politicast here.
Remember that the Politicast Podbean channel is also the host for podcast versions of Open Sources Guelph. The previous Thursday's episode of Open Sources will be posted on Mondays.
Posted by Adam A. Donaldson at 9:00 AM