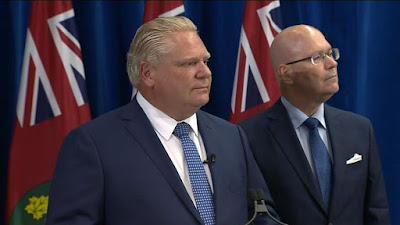 On Friday, Premier Doug Ford announced that the Ontario government was cancelling the elections for regional chair in York, Peel, Niagara, and Muskoka. But wait a minute, there are already regional chairs established in Halton, Durham, and one more... Where was that regional chair, again? Oh yeah, Waterloo!


"The other more mature regional governments that were in place in Durham, Halton and Waterloo will not be impacted by these changes," Minister of Municipal Affairs and Housing Steve Clark said in the announcement Friday.
But...
"What we are going to do during this pause is take a long look at regional government across the province — where things have worked and where things haven't — to figure out what we can do better," Clark added. "We'll start this review informally in our discussions at the upcoming AMO [Association of Municipalities of Ontario] conference and will follow up with something more formal in the fall."
The Region of Waterloo was established in 1973 when three different counties were amalgamated with the County of Waterloo. This was the same year that the towns of Galt, Preston, and Hespeler were amalgamated with some smaller surrounding communities to become Cambridge. Amalgamation remains a sore spot in Cambridge even 45 years later.
“People have attachment to their communities,” Cambridge Councillor Nick Ermeta told CTV News. “We still haven’t been able to unite the city as well as we should have.”
Others are taking the Province's decision in stride. “If the province says that this conversation is going to happen, that is their right, and I’ll be at the table,” said Waterloo Mayor, Dave Jaworsky.
Interestingly, it was the Waterloo City Council that killed amalgamation consideration with Kitchener in 2011 with a unanimous vote to reject talks.
The outgoing Chair of Waterloo Region, Ken Seiling, told CBC that he's confident that the regional government is already working the best way it can for the more than half-a-million citizens of the area.
"During my time, there have been a number of reviews of regional governments or county governments across the province," Seiling explained.
"What's come out of them is actually, every one of them virtually has strengthened the counties and the regions — the roles of the counties and the regions. Unless there's some political agenda afoot here, my guess is that … they might find the same sort of things," he said.
"More and more of the services that are important and are expensive are operated at the regional county level and I can't see the province dismantling that."
Time will tell...
Posted by Adam A. Donaldson at 4:27 PM