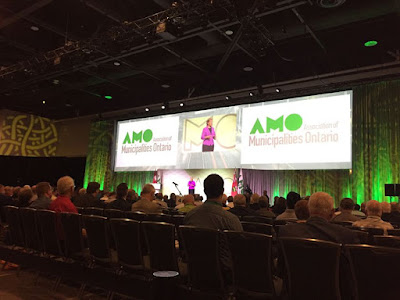 At city council this week, a resolution from the Association of Municipalities of Ontario (AMO) to support the North America Free Trade Agreement and stand with governments across Canada against Donald Trump's aggression on trade was passed unanimously. You may be asking, "What good does that do?" You may also be asking, "What the heck is AMO again?"


This week on the podcast, we dig into the deal with AMO, an organization with an important function and a long history. For the record, AMO describes itself as "a non-profit organization representing almost all of Ontario’s 444 municipal governments" that "supports strong and effective municipal government in Ontario and promotes the value of municipal government as a vital and essential component of Ontario and Canada’s political system."
That sounds rather dry, doesn't it? What we need is someone on the inside to translate that for us!
Fortunately, we have the perfect person locally to talk about the benefits of AMO, and to lend insight on the what, why, and how of the organization. Earlier this month, Ward 5 City Councillor Cathy Downer was acclaimed to AMO's board of directors for a second term as a member of the Large Urban Caucus. She has a seat at one of AMO's biggest tables, and also knows a thing or two about governance given her council experience.
So with Councillor Downer's assistance this week, we talk about the ins and outs of AMO: How is it organized? What does it do? And how influential is its work on people in higher levels of government? We talk about AMO's past, it's present, and yes, it's future, including what might be a difficult four years with a new government in Queen's Park that might not want to hear from 444 cities and towns looking for more money.
So let's get the 4-1-1 on the A-M-O on this week's Guelph Politicast!


You can learn more about AMO and its various initiatives at its website here. The annual AMO conference will take place in Ottawa from August 19 to 22 and you can stay tuned for some likely news to come out of that gathering later next month.
The theme music for the Guelph Politicast is from the KPM Klassics collection by Syd Dale.
The host for the Guelph Politicast is Podbean. Find more episodes of the Politicast here.
Remember that the Politicast Podbean channel is also the host for podcast versions of Open Sources Guelph. The previous Thursday's episode of Open Sources will be posted on Mondays.
Posted by Adam A. Donaldson at 9:30 AM