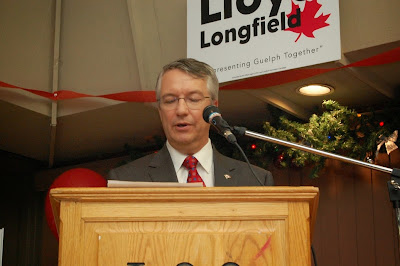 Travelling down to city council every week to keep tabs on the members of our local government is easy, but what about keeping tabs on Guelph's Member of Parliament from a few hundred kilometres away? It's tricky, but not impossible thanks to online tools. So if you feel like keeping tabs on Lloyd, that is to say, if you want to know what our MP, Lloyd Longfield, is up to in the House of Commons, here's how you can do it.


The easiest site to use is called OpenParliament.ca. It was launched by Michael Mulley in 2010, and he makes it abundantly clear that he's a data nerd that is not a part of the government or a part or any campaign. "I launched Open Parliament in order to quench my own curiosity, to push Parliament to do better, and to promote the idea of open data," the computer programmer wrote in the about section of OpenParliament.
OpenParliament culls from various sources used by MPs including social media and press mentions, as well as posting links to the various votes and speeches made in the House and in committee. It's all listed in a simple, visual, and colourful stream of information in chronological order that runs from the newest items first. It also has a word cloud of the most frequently used words by that member. For Longfield, the word is "looking", but "Chamber of Commerce", "innovation", "University of Guelph", and "study" also figure highly in Longfield's public comments.
The information's much more bifurcated on the government's own website though, OurCommons.ca. On Our Commons, you can take a more in-depth look at Longfield's tenure in Ottawa (or any MP for that matter). Information is broken down by an overview of the member, their roles, their work, and their expenditures. For instance, under roles, you learn that Longfield is on the Standing Committee on Industry, Science and Technology, the Standing Committee on Agriculture and Agri-Food, and the Subcommittee on Agenda and Procedure for both. He's also a member of the Canada-Germany Interparliamentary Group, Canada-Israel Interparliamentary Group, and the Canada-Italy Interparliamentary Group.
Of course, the most wonkish portion of the site is the review of votes passed during the current term. Not only are the results of all of the 424 votes logged in chronological order starting from the most recent, but they're also organized according to the type of vote, like all the votes for House Government Bills or Private Member's Bills for example. It also tells you the tally. For instance, Longfield has cast 254 yea votes, and 169 nay votes. That leaves one vote left over, the one that ended in tie. Click on that you discover that this rare tie in the House was over the second reading of C-10, an Act to Amend the Air Canada Public Participation Act. That was in May 2016, and the act has since received royal assent.
In the final section, there are the expenditures, in other words, the money. Every quarter, the budgets for the MPs and their offices are posted, and the latest numbers are for the quarter that ended on September 30, 2017. You can see how much Longfield's office spent on salaries, travel, rent, advertising, and all the way down to the postage. For extra fun, you can go more in-depth on hospitality and see how much Longfield (or other MPs, if you like) spent on meetings and meals. The expenditures page also comes with a handy guide on how to read each line item in case your not accounting inclined.
So now you know the rest of the story. In the meantime, Longfield will be holding his annual New Year's Levee with Guelph MPP Liz Sandals on Sunday January 14 at the Italian Canadian Club. The House of Commons won't sit again until Monday January 29.
Posted by Adam A. Donaldson at 1:25 PM