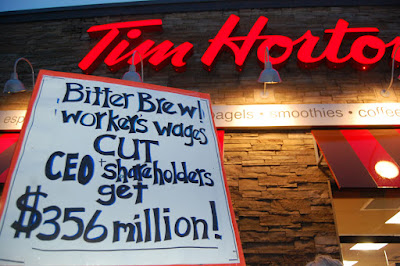 It's not every day that your get raise of over $2 per hour, but that's what happened on January 1 of this year when the Ontario government's mandated minimum wage increase went into effect. All those greedy fry cooks and stock boys will now be driving their sports cars and taking European vacations on the back of the small business owners that drive our economy, right?


Well, that's a bit over the top, but it's felt like that has been the media message. Whenever you hear about somewhere raising prices, or changing hours, or closing locations, the blame immediately falls on the minimum wage increase. Meanwhile, it seems some business owners are taking advantage of the situation, like the case of Tim Hortons cutting paid breaks and other benefits to staff. Forget the fact that you have to have $1.5 million in the bank to open a Tim Hortons in the first place, clearly these "small" business are on the brink of fiscal collapse.
The corporate media has failed in covering this in any kind of balanced way, the effects and benefits of workers have never been addressed in favour of salacious, made up stories. Consider CTV Kitchener's coverage of the closure of Smokin' Tony's Barbecue in Guelph, the third business with the name to shut its door in Guelph in the last four years, twice in the same location. They took it as gospel from the owner that minimum wage was the reason he was closing. Clearly, in the interest of balance, it was up to this podcast to offer some.
This is where Sheila Block comes in. She's the senior economist of the Canadian Centre for Policy Alternatives, an independent and non-partisan think tank policy research institute that some, admittedly, describe as left-leaning. That's particularly noteworthy in this instance because they do a lot of work with organized labour, who has, lately, been organizing protests against Tim Hortons stores behaving badly. Having said that though, the mainstream media has done a pretty good job of covering things from the business side, so I asked Sheila Block about the veracity of the talking points, how minimum wage workers fit into the broader economic picture, and the details the media are overlooking when they talk about the issue.
So let's maximize the minimum time we had with an actually economic expert to talk about the real effects of the minimum wage increase on this week's Guelph Politicast.


To learn more about the work of the Canadian Centre for Policy Alternatives, you can visit there website here.
The theme music for the Guelph Politicast is from the KPM Klassics collection by Syd Dale.
The host for the Guelph Politicast is Podbean. Find more episodes of the Politicast here.
Remember that the Politicast Podbean channel is also the host for podcast versions of Open Sources Guelph. The previous Thursday's episode of Open Sources will be posted on Mondays.
Posted by Adam A. Donaldson at 9:00 AM