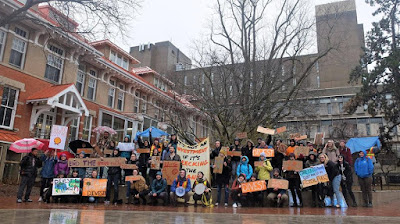 In an interview on the subject, a spokesperson from Fossil Free Guelph said that whatever the outcome of a vote on an ad-hoc committee report at Tuesday's Board of Governors' meeting, "It's not done, until we get divestment." As luck would have it, despite a report that said otherwise, the debate over whether or not the University of Guelph should divest its endowment from fossil fuel companies is not over. Yet.


Tuesday's meeting, which was attended by over 100 students organized by Fossil Free Guelph, was meant to hear a report that investigated the matter of divestment. The special committee that researched the matter decided that despite the passion and arguments of Fossil Free Guelph, who asked for the review in the first place, the U of G's $33 million investment in fossil fuel-related stock like Exxon-Mobil and Suncor, was a proverbial drop in the bucket not worth divesting.
In other words, the U of G withdrawing its money, being a symbolic move given the fact that more than $4 trillion is invested in the fossil fuel sector, is not worth the financial uncertainty of divesting from proven investments.
But not so fast!
Apparently. the Board of Governors decided that more research was needed before coming to a final decision. "There's a time for fast decision making, but there's also a time where maybe you slow things down and make sure you have all of the information and all of the research in place before such an important decision is made," said Chuck Cunningham, a spokesperson for the University of Guelph.


Formal motion is pushing back the tabling of the report from the President to reevaluate the issue further. #greenschoolsnotfossilfuels
— OPIRG Guelph (@opirgguelph) January 23, 2018


President and Vice-Chancellor Dr. Franco J. Vaccarino put forward a motion to postpone a final decision on the matter until the finance committee consults with Fossil Free Guelph and determines what further investigations need to be done in order to reach an agreement everyone can get behind. The exact timetable and content of these consultations is to be determined.
"With over 100 students and community allies standing behind us, the Fossil Free Guelph team was able to stop the Board of Governors from dismissing our call for divestment," said Fossil Free spokesperson Julie Maxwell victoriously in an email. "Instead, the conversation will continue, and Fossil Free Guelph will continue to be there, holding our administration accountable."
"It became clear, I think, to most of us in the room that we have more work to do," said Cunningham. "The most important thing is that at the end of the day, the best decisions are made based on all the facts, and the sense was that we don't have all the facts at this point, so let's spend some time and get it right."
The timeline however will be tricky. "On one hand the next board meeting is in April, and it would be good to go forward into a position in the April meeting because students are still around on campus, and if we go for the June meeting there isn't same representation of students," Cunningham added. "We're not going to rush it at all, we're going to make sure that both sides are comfortable with our go forward plan, and that's going to be full articulated."
Fossil Free though doesn't like the delay. "We are frustrated that they are drawing out the process rather than making a decisive and positive choice to divest," said Maxwell. "This delay will mean continued hard work for student volunteers."
Cunningham actually praised Fossil Free Guelph for the work they've done so far and credits them with a solid presentation at the Board of Governors. "Frankly I thought it was a most respectful and productive debate between members of the Board of Governors and the students," he said. "They had a student spokesperson, who did, what I thought, was a terrific job of presenting the evidence as they see it, and the students throughout the presentation acted with respect and very professional and I think that had an impact on everyone in the room."
As for the impact of the U of G's green reputation, Cunningham thinks that whatever the final decision is, that the school's environmental credentials are secure. "We've already rolled back our own greenhouse gas emissions below 1990 levels, we anticipate that by 2030 we'll cut our greenhouse emissions by a further 40 per cent, and then 80 per cent by 2050, so I think we're definitely responsible in that way," he said.
"I truly believe that at the end of the day, that fact that we have such a strong community here at this university, I think that pride of community, and pride of place, played an important part in wanting to make sure all members of the community were heard from, and that the best decisions are being made on the best research and facts that are available," Cunningham added.
Posted by Adam A. Donaldson at 9:00 AM