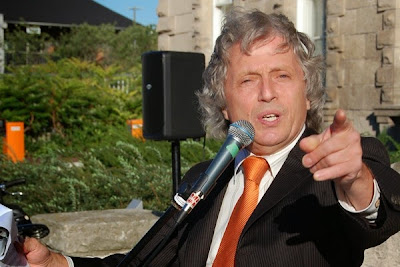 The new year is the perfect time to start new commitments, and try new things, and Ward 2 City Councillor James Gordon seems to be taking that to heart by starting a Guelph branch of LEAP, and he hopes you will join him.


"LEAP chapters are forming all across the country. Naomi Klein, one of the group’s founders, made an appearance in Guelph this past summer, and challenged Guelph to start its own chapter. To her, Guelph’s reputation as a leader around addressing these issues made it a natural choice for an active chapter to lend its voice to the national discussion," Gordon said in a press release.
Gordon references Klein's visit to Guelph last year during the Eden Mills Writers Festival where she said that "Guelph is being out-radicaled by Peterborough," and that her partner, documentary filmmaker Avi Lewis told her to ask the Guelph crowd, "are you really going to stand for that?" Gordon, apparently, is not.
The LEAP manifesto came out of meeting of a group of progressive activists and academics, and though its founders claim to be non-partisan, those same founders have deep roots in the NDP, and it has been the NDP that has been most vocal about adapting LEAP's principals on social justice, environmentalism, economic reform, and Indigenous rights. The initial signatories include the usual suspects like Stephen Lewis, Maude Barlow, David Suzuki, and, of course, Klein herself, but the website for LEAP lists over 49,000 over signatories.
Now given the LEAP's connection to the NDP, you may recall that Gordon ran twice as the NDP candidate for Guelph in the 2011 and 2014 provincial elections. Interestingly, in a recent Guelph Today post, Gordon was one of a handful of councillors that stated uncertainty about running again for council, though Gordon's response to the question was "probably", which is more a commitment then maybe. Still, might the musician turned politician have his sights set on higher political ambitions?
On the other hand, maybe he just didn't like getting called out by Klein and has been stewing about it since September...
Gordon's newly created Guelph chapter has over 20 members so far, and the councillor said in his release that "a swift and enthusiastic response" has greeted its creation. Gordon also promises that there will be a launch meeting for LEAP Guelph soon, but in the meantime you can check it out for yourself online here.
Posted by Adam A. Donaldson at 9:46 PM