The Official Plan is Officially Official 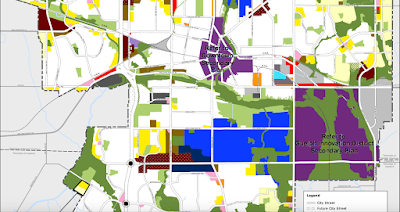 A little more than 65 months after city council passed the latest update to the Official Plan, OPA 48, it is finally the law that governs the development of the land. The Ontario Municipal Board (OMB) approved the City’s Official Plan Amendment (OPA) 48 with some modifications on October 5.


Passed by council in a vote of 11-2 in June 2012, OPA 48 endeavours to protect of Guelph’s water resources; guard public health and safety regarding natural and human-made hazards; be proactive with climate change planning; commit to transportation planning with a greater focus on transit, walking and cycling; and, meet affordable housing needs. At the time, many were concerned that the previous update, OPA 42, which was based around the protection of Natural Habitats, did not do enough to enough to protect the Eramosa and Speed Rivers.
Naturally, OPA 48 immediately ended up before the OMB. In December 2013, the provincial government approved the changes to the official plan. With that out of the way, the only hurdle left was the appeals to the OMB, the deadline for which was December 31 of that year. The appeals were heard in October 2014, and were followed up by further hearings. A settlement was reached in November 2015, and a number of amendments were ordered, which have now finally been approved by the OMB.
“This approved amendment brings Guelph’s Official Plan in line with the Provincial Policy Statement and provides a framework for implementing Ontario’s Growth Plan for the Greater Golden Horseshoe in Guelph,” said Melissa Aldunate, manager of Policy Planning and Urban Design in the media release. “OPA 48 sets the city-building vision for Guelph to the year 2031 and serves the interests of our residents and businesses.”
So what kind of changes were made? Well, the fully updated document has not yet been posted, but many of the changes already made have been posted.
For example, the original OPA 48 was a little more loose with its language about home businesses, or side gigs, saying, "Such activities, known as home occupations, will be permitted within all designations of this Plan where residential uses are allowed," but that line was taken out. Also, the line "A home occupation, such as a hair stylist, music teacher or home business use, will be permitted as an ancillary activity within a dwelling unit. A home occupation will be permitted as a subordinate activity to a residential use," was changed to the simpler, "A home occupation may be permitted as an ancillary activity within a dwelling unit. A home occupation may be permitted as a subordinate activity to a residential use."
Another major change concern, of all things, is archaeology. There's clarification on what constitutes "archaeological resources" in the city, and the criteria for establishing the "archaeological potential" of a given site including 10 items covering various natural and historical heritage items. There's also an updated definition for "Built Heritage Resource", "Coach Houses", and "Cultural Heritage Landscape". The definitions of "Floodway", "Sensitive Land Use", and "Garden Suite" or "Granny Flat" were also expanded, and the definitions of "Redevelopment", "Subwatershed" and "Safe Access" were redefined.
Of course many of the changes have to do with numbering and language. Many older terms used were deleted, including: "Business Land Use", "Capital Expenditure", "Multiple Unit Residential Building", "Prime Agricultural Land", and "Semi-detached Dwelling".
So that's that, right? Not so fast. There are still a few appeals at the OMB, but "These appeals will be addressed through future Ontario Municipal Board hearings," said the media release. For now though, as noted at last week's planning meeting, there's no more double-blind planning policy surfing between OPA 42 and OPA 48. So Guelph has that going for it, which is nice.
Posted by Adam A. Donaldson at 10:16 AM