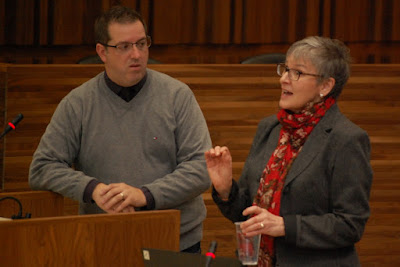 There's no doubt that there are people in Guelph of limited means that desperately need help, but for every person that knows what need looks like, there are others that see someone poor and sees someone that just hasn't pulled up their own bootstraps far enough. But seriously, how can someone in the middle class or otherwise upwardly mobile understand the plight of people in poverty?


That's the point of the first ever Mayor’s Dialogue on Poverty which took place at City Hall on October 25. The main speaker was Guelph-Wellington Bridges Out of Poverty facilitator and Wellington-Dufferin-Guelph Public Health nurse Elaine Weir. Weir gives talks to private and public audiences to encourage people to look at poverty in a different light, and confront the issues of poverty by looking at them from the perspective of those living in it.
For example, think of someone starting a job and showing up late on their second day of work. The immediate impulse is that this person is lazy, maybe they slept in, or may be they just don't care about rolling up to work on time. The reality though may be that this person went out to get their bus, and through no fault of their own, it never came. We've known it to happen, we've seen it happen in recent weeks, and, let's face it, calling for a taxi or hailing an Uber is not an option if you've got limited means.
On this week's podcast, you will hear these and other examples from Weir. Some of this may be basic for advocates already living and breathing poverty issues, but for the broader community at large, especially a community as affluent as Guelph, this is an important primer. The first part of solving a problem is understanding it, and it's very easy to misunderstand the issues of poverty looking at it from the outside. Let this be the beginning of something better.
So let's hear about looking at poverty differently in this week's Guelph Politicast!


You can learn more about Bridges Out of Poverty by going to its website here, or by following them on Twitter here.
If you are so interested, Mayor Guthrie live streamed the entire event over Facebook:


And this is the video that was mentioned by Weir in her talk.